Another National Assembly Representative has spoken out about foreign English teachers. This time, nothing negative has been said about the teachers (only their placement around the country). On October several articles were published, including one by Newscan, summarized below:

Grand National Party representative Kim Seon-dong (National Assembly Education, Science and Technology Committee) spoke on October 25 about the ‘situation of foreign teachers over the last three years’ and presented the results of his analysis. "The number of foreign English teachers in 2007 were 13,077, in 2008, 14,122, and in 2009 14,873, as the number increases each year.

According to his analysis, by number Seoul, Gyeonggi-do, Busan, Daegu, and Gyeongsangnam-do have the most foreign English teachers, while Jeollanam-do, Jeju-do, and Chungcheongnam-do have the least.

In addition, Seoul and Gyeonggi-do respectively have 38.9% and 21.1%, and if you combine the two, have 60% of foreign English teachers.

On September 21, Kim discussed the situation of native speaking English assistant teachers in the public education system and said there were 7,088 foreign teachers, while in private education there were 2 times the number of foreign instructors and said "In public education English requires more investment for the sake of competitiveness.”

Yonhap also published a short article, which says something different. 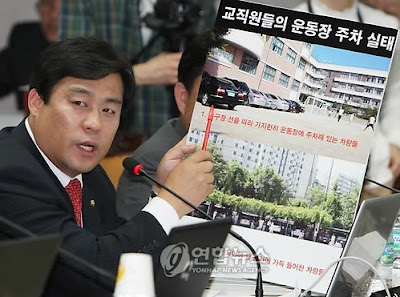 Nationwide, in 16 city and provincial offices of education nationwide, there are 7,088 native speakers registered, or half the total number, and there is a placement rate of 65.46%.

Jeju (100%), Chungcheongnam-do (90.39%), Gyeonggi-do (87.13%), Busan (82.68%)have an over 80% placement rate, while Chungcheongbuk-do (40.00%), Jeollanam-do (38.42%), Daegu (30.77% ), Gyeongsangbuk-do (24.61 percent) have a less than 40% placement rate.
-
So, even though Jeju has so few teachers, they have a high placement rate? You'd imagine the placement rate would be a better measure than simply the number of teachers in a certain area, seeing that there are huge population differences. This news report was especially reported by local press in the provinces, like the Chungcheong Ilbo:

The number of E-2 visa holders were 17,721 in 2007, 19,771 in 2008, and up to July of this year, according to this, 21,498. Now, there are teachers of other languages included in those numbers, but they don't make up more than 1,200 or so. According to this, "Throughout the country, in 1,100 elementary, middle and high schools are some 7000 native speaking English instructors, and in hagwons there are about 20,000." That obviously is more than people on E-2 visas, but may include people on E-1, F-2, and F-4 visas. Above it says "there were 7,088 foreign teachers [in the public education system], while in private education there were twice the number of foreign instructors". While that adds up to the correct number of teachers, it doesn't add up to 14,873.

Strange. And worrying, seeing a national assembly representative once again tossing around incorrect figures, even if, in this case, they aren't being misused to portray foreign English teachers in a negative light.
Posted by matt at 5:08 PM

no politician will ever admit it, but many of them are simply the xenophobic racists.
i just came back to my korea after spending 6 years studying in America. there are too much of the closed minded, ignorant legislators in every country whether GOP or GNP. but, you are aware how many open minded people there are in Korea, right? i feel like the bad apples ruin it for the both sides: the ignorant Koreans ruin it for the openminded ones, and the irresponsible foreigners ruin it for the good ones. both sides of the bad apples attack each other and the good ones get drawn into the fire.
i sit in subway, knowing both english and korean. sometimes, i listen to foreigners openly and loudly ridicule koreans in English in the so crowded train. but then i also hear koreans ridicule a group of foreigners in Korean in a crowded bus. they think that they cannot be understood by each other, but many of us know both languages and feel like we very are caught in the middle. why dont you try being a korean walking through itaewon sidewalk, and tell me how you feel after having abuses yelled at you by drunken British group? maybe it is how I will feel as to be a worker from Bangladesh walking through market at Gumi. It is growing pain of Korea.