Update:
I just noticed this. Nice to see this had led to a comment from Rep. Lee's office (I'll be generous and assume reporter Kang didn't make it up). This is also interesting:

A director from the Seoul Immigration Office said there are also many criminal cases that are not recorded in the data. He said one foreign English teacher was caught having sex with a minor but was not prosecuted as the minor did not want to press the case.

Funny, I thought, as per the title of this article, that 'Sex With [a] Minor [is] Not [a] Crime If Not Forced'.

A slightly more detailed breakdown of the English teacher crime statistics released by Representative Lee Gun-hyeon have turned up. These were not released by Yonhap or any other news outlets that initially covered the story, but turned up instead at Anti-English Spectrum. Whether their source was a media outlet or Representative Lee's office I'm not sure.

The first chart shows total crimes by year, while the second chart breaks down crimes by year and location (Seoul, six metropolitan cities, and nine provinces). 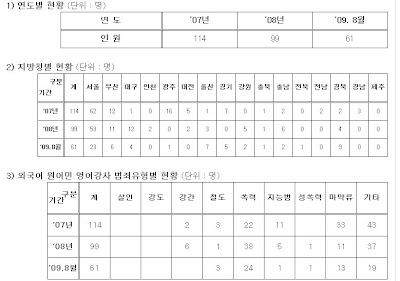 Compared to the statistics in Wagner Report, the drug arrests have more arrests for 2007 and less for 2008.

Had there been more both years, it might suggest that Lee's stats are for all English teachers and not just E-2 visa holders (the stats above are for E-2 visa holders only), but the stats being lower and higher makes... no sense.

Also, one has to wonder what is included under 'other' arrests, of which there are a lot. I wouldn't mind knowing more about these. 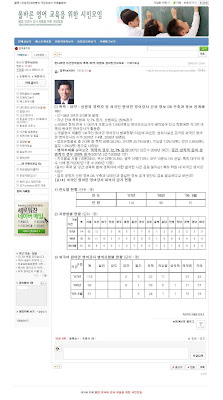 wow 250% increase in rape and sexual crimes in 2008. what is their motivation i wonder?

do they want to eradicate english from korea, or just the westerners?

it seems koreans are always

"A director from the Seoul Immigration Office said there are also many criminal cases that are not recorded in the data."

This type of shoddy reporting and reckless commentary from officials has got to stop.

If there were in fact "many criminal cases" naturally they would be recorded. Unless of course they weren't criminal cases at all.

Other crimes I bet are traffic violations like DUI, hitting another car or driving a scooter without a license, and maybe gambling would fit there too.