Discussing Korean and Japanese 1960s and '70s rock on 'Idolcast'

I was contacted by the blogger Filmi Girl late last year and during the ensuing email conversation I found out she knew a lot about 1960s Japanese 'Group Sounds' bands and was interested in Korean bands from that time as well. She asked me if I'd be interested in appearing on her podcast, 'Idolcast,' and our resulting conversation, interspersed with lots of music, can be listened to here.

A list of the songs included can be found here.

Part of our conversation in which she explained the history of the mid-to-late 1960s Japanese band the Tigers was cut from the conversation because she's already done two podcasts about them (with a third to come). They can be found here and here.

Korean rock bands in the late 1960s (well, 1969) and early 1970s were also referred to as 'group sound,' which clearly was influenced by the Japanese term. Just what other influences may have came from Japan I'm not sure. While some Korean singers like Patti Kim did concerts and recorded in Japan, the ban on Japanese cultural products (only partly lifted in 1997) would have made it difficult for Japanese performers to come to Korea. One exception to this was the 'Asia Vocal Team Competition' mentioned here in July 1969. Sunday Seoul referred to it as the 'Asia Group Sound Competition' and stated that it took place from July 16 to 20 at Citizens' Hall (where Sejong Cultural Center now stands, and where Cliff Richard would play to screaming fans three months later). Groups from the US, Japan, Korea, and Indonesia competed, including the Astrojets from Japan and Spookies from Indonesia.


Below left is ' Miss Morita,' a member of Japan's go-go dancing team. 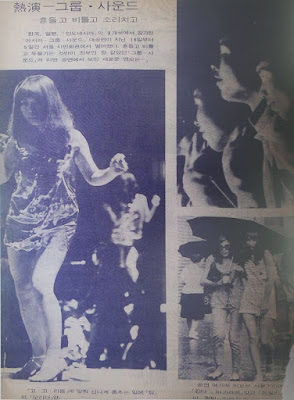 The top photo below is of Japan's Astrojets under 'psychedelic lights,' and below them are the Key Boys. 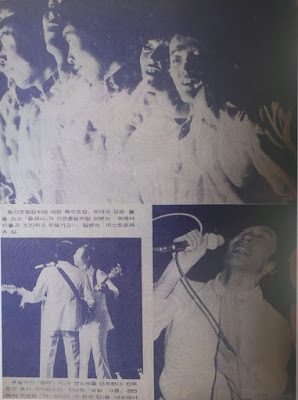 The question of cultural links between Korea and Japan at that time would be interesting to explore. Many thanks to Filmi Girl for an interesting conversation!
Posted by matt at 10:13 PM No comments:

My latest article for the Korea Times is essentially about the session band 동방의 빛, or ‘Light of the East,’ who recorded over 30 albums between 1973 and 1975, including the 14-volume ‘Golden Folk Album’ series and albums by Lee Jang-hui, Kim Se-hwan, Song Chang-sik, 4월과 5월 (April and May), and the duos Two Koreans and Hyeon-gyeong and Yeong-ae. They also did the soundtracks to the premier youth culture films of that era, the best-selling ‘Heavenly Homecoming of Stars’ and ‘March of Fools,’ both based on Choi In-ho novels. The music could be described as folk-rock, but it also incorporated synthesizers, and one song in particular, Kim In-soon’s ‘여고졸업반’ (Girls’ High School Graduating Class) predates the OMD song ‘Electricity’ by 4 years and stands out for me as the first synth-pop song (particularly since it wasn’t some obscure song – it was a number 1 hit). Unfortunately, though the film it served as a soundtrack for was a breakthrough for teen actress Im Ye-won (who became the ‘nation’s little sister’ for the latter half of the 1970s), the film itself was representative of the safe, inoffensive entertainment preferred by the dictatorship in the late 1970s, in contrast to the (then) new sounds found in the song.

I mentioned in the Korea Times article that the group was known as ‘Light of the East’ "retrospectively," but it seems that's not true - I did find a reference to them here in 1974 saying that Song Chang-sik was going to take over temporarily as the group's leader after Lee Jang-hui was injured a motorcycle accident, suggesting that they were more than just a session band (the guitarist for the band, Gang Geun-sik, played guitar on or arranged songs on some of Lee's earlier albums).

As well, this youtube page has two of their more experimental instrumental albums, while the Golden Folk Album series have all been uploaded to youtube (Volume 1 is here).

And last but not least, the person who tipped me off to 동방의 빛 being the group behind all of these albums (not sure if he wants to be named here) has uploaded a number of 70s mixes of Groovy Psych Folk, Psychedelic Go Go, Female Funk, and Jazz here.
Posted by matt at 6:47 PM 4 comments: