Appearing in the Korea Times...

I've had two articles published in the Korea Times (or on its site) in the past few days. The first is a post about the Mikuk Sikdang eatery and the meaning behind its name, while the other is the first of a new column (still working on a title) focusing on (mostly) post Korean War history and foreign-Korean encounters (helped out by my access to the Korea Times archives). Many thanks to Jon Dunbar for making this happen.

Today's column deals with the history of James Wade's 1964-74 Korea Times column "Scouting the City," and can be found here. I've written about James Wade before and posted several excerpts of his writing here.

Here are a few sentences I cut out due to space restrictions:


According to Stickler, to get material for this entertainment column, a sidekick "would approach nightclub managers with the pitch that in return for two free dinners and a show a great deal of valuable publicity would be gained” - which surprisingly usually worked. Some nightclubs included “striptease dances performed by nubile Western girls imported for the purpose," and one of them, Babette Blake, was immortalized as the oft-appearing character LaLa Legume.

One of the largest targets “Uncle Alfie” took on, however, was the US. Army. Some criticisms were based on his own observations, such as when he described in 1966 how the US Army could "stick out a little chicken-wire playpen for its dinky beach enclave” at Haeundae Beach in Busan “to prevent contamination by the natives." The reason for this, a GI asserted ("more honest than most"), was "Just so the army can assert its privilege."

One section I knew I wouldn’t have room to insert was regarding a review by Wade in which he criticized the “repulsive callousness” of the “cardboard” main character of C.D.B. Bryan’s Harper Prize Novel “P.S. Wilkinson,” which was set partly in a “godforsaken place” – early 1960s Korea. Though a character shouts “This is the foulest, goddamndest country I’ve ever seen!”, it was a place made bearable by the “Availability of women.” (This was a portrayal of Korea that came up again and again.)

As for the Goldfinger reference, the part of the "white race" Koreans wanted "to submit...to the grossest indignities" was white women. Add that to the "striptease dances performed by nubile Western girls imported for the purpose" and you get some rather interesting tensions.
Posted by matt at 5:52 PM No comments:

The search for Pyeongchang Olympic Stadium

While not quite as cool as participating in the Olympic torch relay (a tradition going back to 1936), I visited a friend in Wonju Monday and we drove off to go look at Olympics sites, with some success.

Leaving the freeway, we took the scenic route. It's always nice to get out of the city and into the countryside. 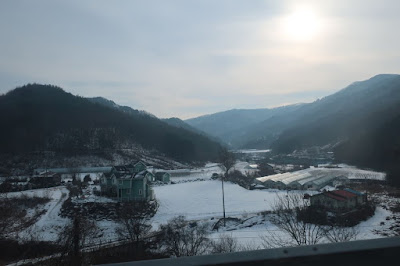 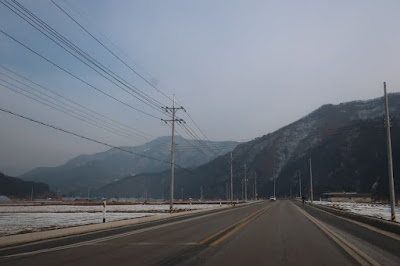 After more than an hour of driving, we arrived in Pyeongchang. There were Olympics 2018 flags, an Olympic market... 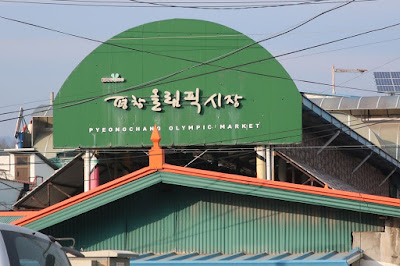 ...a display counting down the days until the Olympics open... 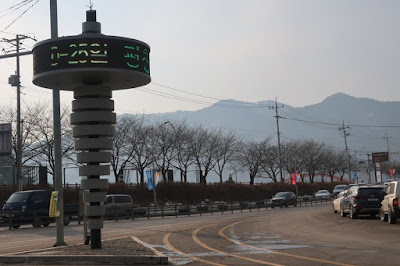 ...Pyeongchang Water at the convenience store... 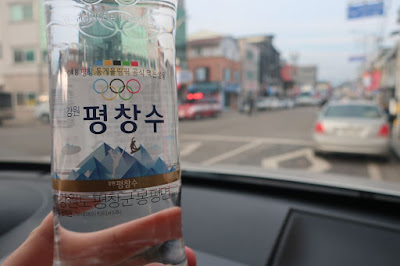 and nothing else. Pyeongchang doesn't seem to have anything to do with Olympics. You might think, "Wait, what? That's - -" 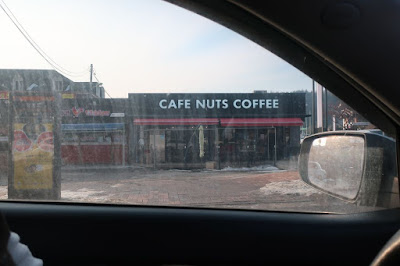 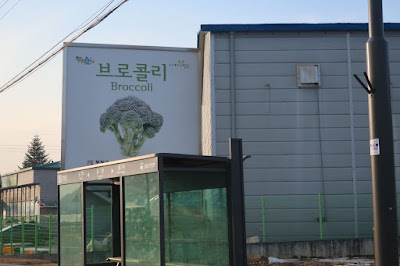 My, what a large broccoli sign you have! (To clarify, it was 20-30 meters behind the bus stop.) I'd like to think a competing supermarket has a slightly smaller broccoli sign, and every day the owner of this store pauses, looks up at this sign, and cracks a very satisfied smile.

Once we realized there were no Olympics in the town they're named after, we decided to resort to Google. It turns out the opening and closing ceremonies are to be held at Pyeongchang Olympic Stadium in Daegwalleong...60 kilometers away. So off we drove to Daegwalleong. The route to the stadium on the regional highway was rather unclear since there was only the occasional small sign above one of the lanes marking it as an "Olympic bus lane" to clue in drivers that they were headed in the right direction. Perhaps there are clearer signs on the freeway, but even after passing the toll booths and heading into Daegwalleong, there were no signs marking the route to the stadium. While not on the level of essentially denying foreign Olmypic visitors access to the KTX during Seollal (the 1988 Olympics also took place during Chuseok), or the difficulties to be found in securing accommodation (or the faceplant ads like these bring on), it's still a bit perplexing that there are no signs. On the other hand, it won't be surprising if they get put up at the last minute.

After asking directions we eventually found the stadium. Here's a Daum Map image of the town with the stadium at the bottom left:

A large town it is not. 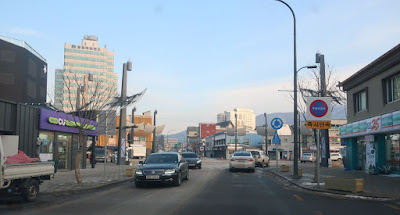 We passed by an avenue of flags and headed toward the stadium. 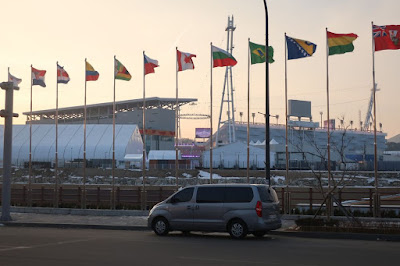 The road wound up around the stadium and we passed two entrances with security guards, but at the end of the road was a parking lot with tents and people (workers and people rehearsing the ceremonies, including a few foreign-looking faces) walking around. Here workers were about to lift the Olympic rings into place. 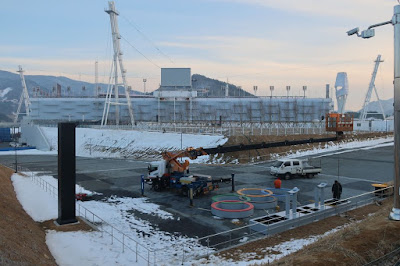 As it turned out, we seemed to have timed it well, and by walking around like we knew where we were going, we were able to approach the stadium... 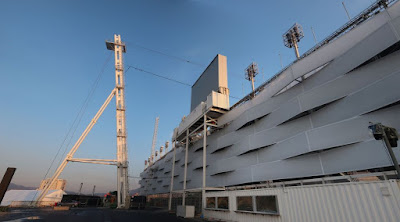 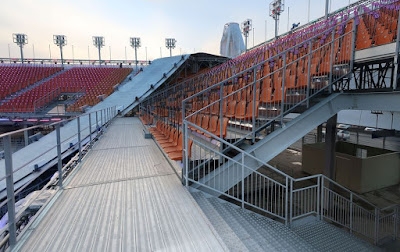 Admittedly, were were pretty thrilled we'd managed to get in. Some part of the either the opening or closing ceremony was being rehearsed. 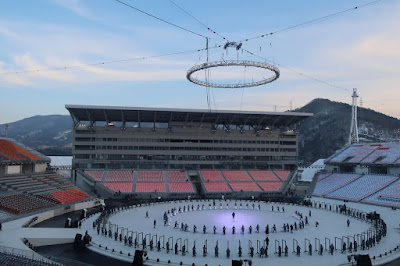 The four towers surrounding the stadium support the ring suspended above the main stage. The stands also sport a light show facilitated by this array of LEDs - almost one for every seat. 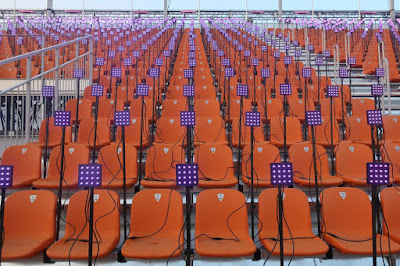 One wonders how many zip ties will be needed rein in all of those cables.

If you were wondering why the stadium had no roof, or what in the world a small town will do with the stadium in the future, the answer became clear as soon as we walked up the steps: it will be torn down once the Olympics end.

While there is a concrete base, the rest of the stadium seems to be made of bolted-together steel beams and poles. It's not meant to be permanent. 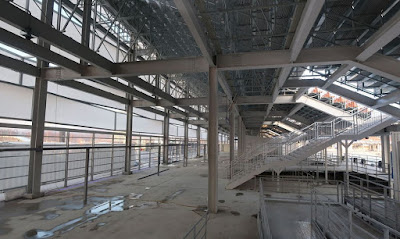 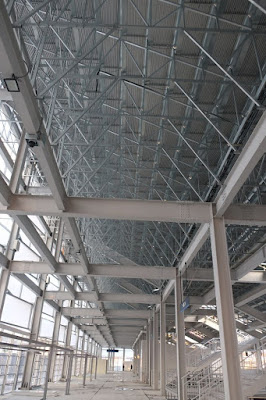 After watching the rehearsals for a bit we walked out. On the way out I realized the tall structure the crane is tending to below is very similar in shape to the torches being used in the torch relay. I imagine it will host the Olympic flame.

Upon leaving we drove past the river bed and I noticed a large mound of snow. There wasn't a lot of snow in the area, and it seems the solution was to have three snow making machines on hand to provide the snow and construction equipment available to move it around. I'm not sure if there are any other events in the area; perhaps the snow... is just for show? 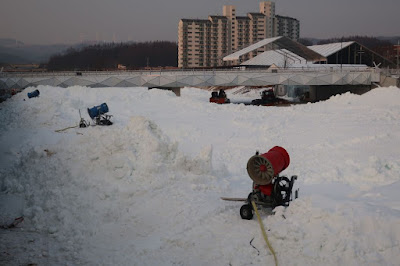 The freeway tunnels have Olympic rings which make for a rather "2001 stargate sequence" experience. 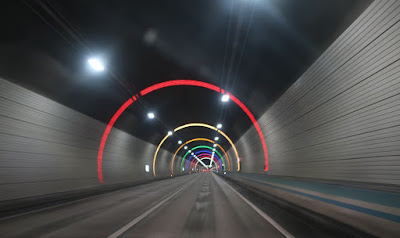 If it had been earlier (and if I'd realized how close Gangneung was) we might have tried our luck attempting to see the skating facilities. Instead we headed home. 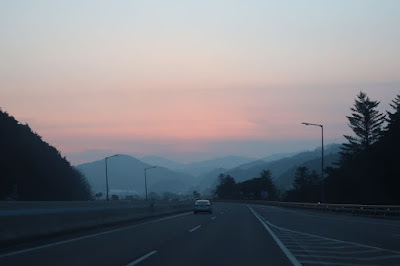