First attempts to fly across the English Channel

It was with some interest that I came across this article about inventor Franky Zapata’s failed attempt to cross the English Channel on his flyboard (he only made it halfway across the 22-mile channel before he ran into trouble at his refueling point). This is because one of my favorite essays I wrote in undergrad at the University of Guelph was from a 4th year course on the public sphere (ie. Newspapers and magazines) in England in the 1780s. For my essay I wrote about the ballooning craze in England in 1785. Hot air balloons had been invented in France in 1783 but lack of government interest in England led to it becoming an entrepreneur’s paradise as balloonists competed for attention. The craze eventually petered out after deaths and the basic physical fact that balloons only go up and down, and aren’t all that exciting after you’ve seen it go up once. It was so popular during that time, however, that pickpockets were even able to snatch Edmund Burke’s wallet as “thousands look[ed] up in astonishment” (the title I gave my paper).

Not everyone who tried this was so lucky: “Pilatre de Rozier, the first man to ascend in a balloon [in France], sought to cross the English Channel from France to England, which was difficult due to the prevailing winds. He set out with M. Romaine on June 15, 1785, flying a machine that combined a Montgolfier [fire-powered] and a hydrogen balloon, and the inevitable explosion occurred over the rocks on the Channel shore, where they both fell to their deaths.” Luckily, Zapata’s failed attempt was far less fatal.

I should also mention that my professor for this course, Donna Andrew, who has published a number of books on this time period and helped instill in me an affinity for archival research (which at that time was all on microfilm), was as dedicated as they come; she’d take our stack of papers to the library, find the books in our bibliography, and check to see that we’d cited them correctly.

I got a B on my paper - she correctly criticized me, despite it being "well written," for being too dependent in its thesis on a secondary source. Years later I realized I should have focused on the public / private divide that balloons broke. You see, some balloonists got the capital to fund their balloon building and hydrogen-making through subscription - those with means would offer them a portion of the capital needed and in return were invited into a closed space to witness the balloon launch. The problem is that balloons rise out of those private spaces into public space, and people skipped work and climbed onto roofs to watch balloon launches. I realized teasing out the ways in which balloons broke the bonds of subscription-funded private space and entered into public space would have made for a much more interesting paper. A future project for a rainy day, perhaps.

Here's a lecture by her discussing the culture surrounding, and criticism of, dueling in 18th and 19th century England:

As Japan-Korea relations spiral downwards, a primer on the direction it may go can be found by looking at the 2002 candlelight protests aimed at the US. To be sure, similar scripts are appearing as nationalist reactions are being stoked, though there are differences. As Robert Kelly has noted, usually there are forces that would slow the momentum of anti-Japanese furor in Korea, but at the moment Korean conservatives are out of power and the US will likely not be bothered to intervene. Thus this is, as he put it, "a ‘useful’ social science natural experiment moment: we will learn just how far the South Korean left is willing to go on Japan, because the traditional brakes are not there this time."

Another difference is that in the past (particularly in the anti-American cases), it was opposition activists who stoked the flames of nationalism, but this time the government and ruling party have taken the lead in this capacity. For example, on Monday Democratic Party Chairman Lee Hae-chan said that "Following Abe’s election victory, Japan will intensify 'its attempts to invade the Korean economy,' (in Korean, "이제 우리나라에 대한 경제침략이 본격화될 것"). The same day Cho Kuk, senior presidential secretary for civil affairs, wrote in a Facebook post that "It is not proper to advocate Japan's assertion at a time when Korea's legitimacy and judicial power are under attack by Japan, which nullified South Korea's sovereignty in the past." Of course Japan complicating export processes is just like being colonized by Japan all over again! How helpful of him to offer such reasoned, thoughtful commentary.

Luckily, Cho noted that under the current government, "Anyone can criticize without fear of retaliation. In 2019, South Korea has a higher freedom of press index than the United States and Japan." This would be more reassuring, however, if Won Il-hee, a news anchor for South Korea's SBS CNBC, hadn't been called a 친일파 ('pro-Japanese) and fired for suggesting that South Korean leaders, policy makers, diplomats, and the media should remain level-headed and seek rational and diplomatic solutions. (See here; hat tip to John Lee.)

Level-headedness has, of course been eschewed for anti-Japanese boycotts which have affected the sales of Japanese goods (though it can at times be difficult to determine what, exactly, is a Japanese product). Protests calling for these boycotts and engaging in giant flag ripping have taken place, and have also equated Japan with the conservative Liberty Korea Party (as has KBS news). Students who held a protest in the Japanese consulate in Busan were detained by police after they "shouted slogans and held banners that read, 'We denounce Japan's re-invasion,' 'We condemn economic provocations,' and 'Abe must apologize.' I fail to see how referring to the 1965 agreement in the face of the ROK's Surpreme Court decision on forced laborers and complicating export procedures is "Japan's re-invasion," but I'm sure the phrase has great utility in whipping up negative emotions in graduates of the ROK public education system who hear it.

One rather inane voice may have inadvertently highlighted one of the Moon government's aims when he wrote, "Nothing spoke for me better than some North Korean media outlets in rebuking the Japanese government," and offered this example:


"The South Korean Supreme Court's ruling, which called for Japan to compensate the victims of forced labor during the Japanese occupation, was more than justified. Tokyo's export controls are shameless acts like the thief turning on the master with a club," said Meari (Echo), the North's government mouthpiece targeting the international audience. "Regarding the imperishable crimes Japan committed against the Korean people ― sex slavery, forced labor and genocide* ― Tokyo will not be able to repay fully even if it sells off the entire archipelago."

What better way to encourage a feeling of brotherhood with those north of the DMZ than by rallying against the eternal race enemy, America Japan? In another broadside directed at the conservatives, the reason to abrogate the 1965 Normalization Treaty upon which Japanese - ROK diplomatic relations are built, it is said, is because in 1965 "Korea was governed by a general-turned-dictator who had only economic growth and his continuous grip on power in mind." While the latter two assertions may be true, in 1965 Park was arguably in the least-dictatorial phase of his rule; open dictatorship would not arrive until 1972.

I'm sure there will be more frustrating days of this ahead.

*(I'm not sure how 'genocide' is to be reconciled with Korea's population doubling between 1910 and 1945, but whatever stokes people's anger is worthy of inclusion, right?

An update, plus subway unions plan to post 20,000 anti-Japanese stickers in Seoul's subway cars. It's nice to see productive action being taken.
Posted by matt at 11:26 PM No comments:

My latest Korea Times article, about the methadone scandal (메사돈 파동) of 1965, which involved medicines containing methadone that were sold at pharmacies to thousands of people due to corruption that reached high levels of government, can be read here.
Posted by matt at 11:35 PM No comments: 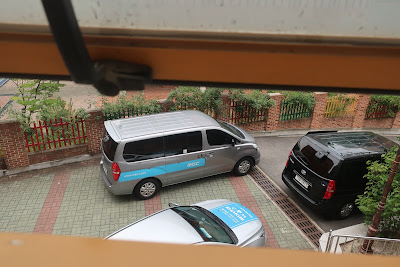 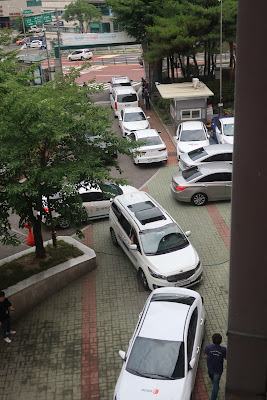 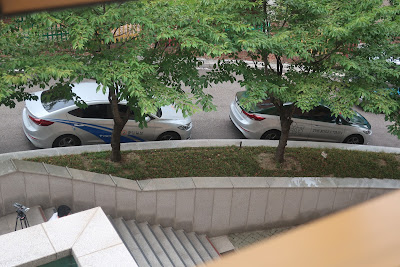 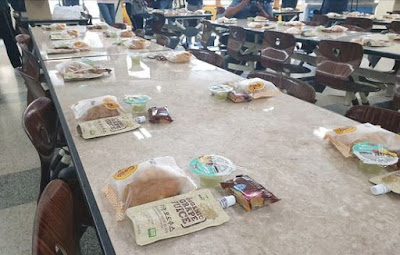 It makes me wonder what the protocol is when it comes to photographing these kinds of stories. Did they contact the school, or vice versa? I'm sure I'll find out eventually. At any rate, it made for a more interesting day than usual. The media presence, I mean, not the lunch we were provided. The bread was god-awful, and I heard some of the grade 6 students were joking about complaining to the media. Thankfully, I was told the workers at our school were only planning to strike for one day. Hopefully their union's demands are met satisfactorily, though it doesn't seem too promising.
Posted by matt at 10:59 PM No comments: