The source of the Kaneko-Park photo 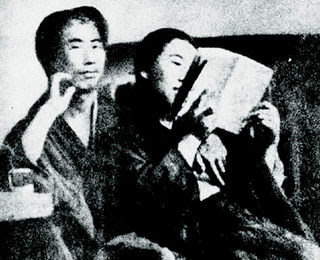 The photo above was posted a few years ago at the Marmot's Hole when Robert wrote about the location of Japanese anarchist and nihilist Kaneko Fumiko's grave in Mungyeong. The photo of her with her husband (their marriage was registered in prison), Korean anarchist Park Yeol drew attention in the comments to that post to how affectionate the pose is (circa 1925), and this posting by Brother Anthony noted that it was taken while they were in Prison. I looked more closely at their case here. One thing I didn't know was that it was apparently Uiyeoldan - a group that would have been called a 'terrorist' group back then - that Park Yeol was hoping to get a bomb (or bomb making materials) from. 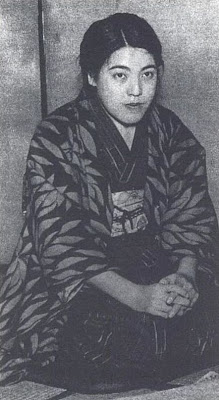 Kaneko Fumiko (from here)
I've been reading Treacherous women of imperial Japan: patriarchal fictions, patricidal fantasies by Hélène Bowen Raddeker, or at least what is available of it at Google Books ($195 is a bit steep for me). The book looks at the experiences of Japanese anarchists Kanno Suga - executed in 1911 in a case of 'judicial murder' - and Kaneko Fumiko and their collisions with state power, and reveals something quite interesting: 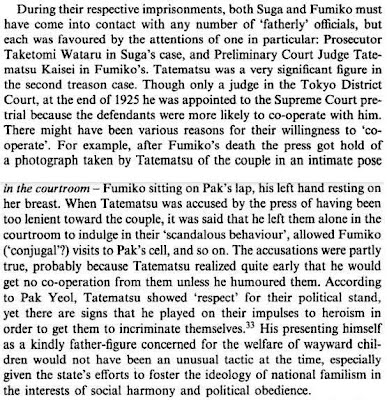 It's fascinating the freedom they were given while in prison and on trial for plotting to kill the emperor (though it's pointed out Kaneko may have had nothing to do with it, but accepted responsibility anyway). What's also interesting is that it was this judge who asked her to write an autobiography/confession, and who eventually passed it on to her lawyer (also an activist), and thus it's partly because of him we know so much about her. Her confession is available in English. Apparently Park wrote one as well, but it's not available in English, and I'm not even sure if it's available in Korean. Raddeker's book delves into a great deal of material beyond the confession, including her letters and court documents. Park and Fumiko were found guilty and sentenced to death, but this was commuted to life in prison by Imperial pardon. Kaneko responded by tearing up the pardon and saying:

You toy with people’s lives, killing or allowing to live as it suits you. What is this special pardon? Am I to be disposed of according to your whims?

In prison, authorities made sure to watch her so that she didn't commit suicide, because, essentially, the Emperor had ordered that she must live. Strangely enough, the work the women were to do in prison was weave hemp into rope. She refused at first, but one day asked to do the work.

She worked hard that day, and the next morning the guard on duty looked in on her at 6:30 to find her diligently twisting the rope; yet when she was checked some ten minutes later, she was found hanging limply from the same rope now attached to bars at the window. [...] [The doctor’s] report expressed amazement at the ‘determined, carefully premeditated, and calm manner of suicide.'

Reading one of the poems she wrote in prison, her course of action doesn't seem surprising:

One's limbs
may not be free
and yet—
if one has but the will to die,
death is freedom.

One wonders about the urge for martyrdom that drove patriotic assassins like Ahn Jung-geun or Yun Bong-gil to their actions - which they must have clearly known would result in their executions. What's interesting about Kaneko is that it appears she was only vaguely involved in the plan to import explosives but chose to implicate herself. Some have tried to suggest that she had a 'death wish' or that she wanted to be with her lover; she told him "I'll never let you die alone" but only he walked out of jail in 1945 (and 'went north' during the North Korean invasion in 1950, apparently dying in 1974). She was 23 when she committed suicide, and while my knee jerk reaction is to consider her suicide tragic, consider what she wrote to the judge:

So I say to you: ‘It’s a joke to admonish a person who doesn’t want to live to want to live. It’s a real joke to turn a person not content with life and tell him his life is very happy.’

For me life has no value. Value comes through a person’s having joy in life. Everything about humans is individual, but nothing is more coloured by individuality than the issue of life and death.

In the end, who am I to judge the final act of someone who had such a strong belief in the power she alone had over her life and death?
Posted by matt at 9:00 AM

I'm getting interested in her life after reading this. I just found out a book about 가네코 후미코 written by Japanese 야마다쇼지 and translated in Korean. I'm also interested in the writer. so decided to order this book..

Interesting. I just ordered this book, which I've been meaning to do for a long time...