Via ROK Drop comes this photo in the Korea Times: 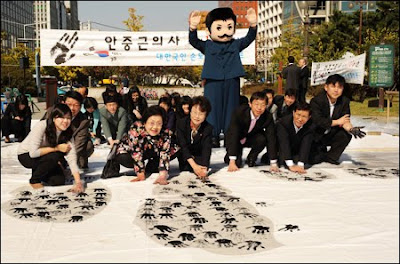 Independence activist Ahn Jung-geun remembered: Officials from the Ministry of Patriots & Veterans Affairs and citizens take part in a hand printing ceremony Wednesday, at the Yeouido Park in Seoul, to mark Ahn Jung-geun (1879-1910)’s 1909 assassination of Hirobumi Ito, a former prime minister of Japan, in Harbin, China. Ahn held Ito responsible for the annexation of Korea by Japan in 1910.

So Ahn held Ito responsible for an event that occurred after both of their deaths? Alrighty, then. Hopefully that colorful little Ahn character above doesn't run amok in Myeongdong, shooting elderly Japanese businessmen.

A year ago I looked at the way famous Korean assassins patriots are memorialized. Seeing as Ahn's deed may have brought annexation on Korea even sooner than planned (seeing as Ito Hirobumi was actually opposed to it), one hopes children are not taught to revere him as a hero or anything of that sort.

'Ding Dong the witch is dead!'

Yup, just a diplomat. Not Japan's first prime minister or anything like that. I'll save a lengthier look at this for another day.


Tomorrow: Unrecognized world record holder speaks through mudang, says 'Why doesn't anyone have choirs for me? I killed 58 times as many people.'
Posted by matt at 2:11 PM

Was he just a wicked crazy killer who blipped off the VIP of Japan? Isn't there any reasonable reason for the killer to be respected?
Are 윤봉길, 김구, 안중근 killers, terrorists or independent fighters?
If I were Japanese, I might think they were the former.
At least they didn't save their lives and fought for the great cause in their position.
I respect them for the reason.

Helen - your English is getting better all the time. Some colorful language there.

Maybe it was over the 1905 treaty, and the situation had already changed (more Japanese coming in or controlling institutions) or the writing was on the wall.

Daum has a widget for the special occasion:

Kim Gu was most probably not a monarchist (he participated in the rebellion against the Chosun dynasty, remember?), so it's safe to infer that he was an independence fighter, a nationalist, and,quite possibly, a very calculating politician.

Per Wikipedia's citations... http://www.findagrave.com/cgi-bin/fg.cgi?page=gr&GRid=8273265 note the message on the right.

It is absurd to compare Ahn's action with that of criminal Woo.

I do not think Ahn's assassination was the best possible way to resist colonialism, but I understand him and respect his patriotism. At least he encouraged the suffering Koreans with the spirit of independence.

The colonialism was not a justifiable contribution to human history. It is a shameful past that resulted in the spreading of communism in the world. Many third world countries fell into the hands of communism as a desperate way to resist colonialism.

Korea already lost its right to foreign affairs, military, and major national decisions under Ito. So agreement with foreign countries should get through the hands of Ito.

Do you think a nation without the rights to foreign affairs, military, and major national decisions, an independent country? Korea under Ito was already no less than annexed country.

I'd agree that the period of Japanese control of Korea begins February 8, 1904, when Japanese troops poured into Korea at the beginning of the Russo-Japanese war. Japanese troops didn't leave until 1945. I'd also agree that the protectorate left Korea under de facto Japanese control. Still, there was a difference between being a protectorate and being a province of Japan, and oppression became even stronger under the latter. Ito wanted to maintain the fiction of the protectorate, and was wise in doing so. Ahn's actions brought about annexation even faster than planned, but he is celebrated, while the tens of thousands of people who took part in the uibyeong, or righteous armies, do not get the same recognition (but then they were fighting - with muskets and swords - an army that had just beaten Russia in the biggest war in history to that point, so the outcome was never in doubt without foreign aid).

And basically, Ahn, as Kushibo puts it, is someone "whose importance goes little beyond having killed someone else".

While this article points out the contribution of his ideas, he would never have had the chance to be heard if not for firing his Browning pistol at Ito.

(And I love how Ahn T-shirts were handed out at the 2006 World Cup in Germany - an obvious combination of sports nationalism and racial pride.)

What I find more interesting is the fact that some killers are considered more righteous than others, depending on whether or not their targets held a political position and what the beholder's beliefs are. Essentially, if you kill a symbol, your murderous actions are excused by some. If only Woo had, say, killed members of Chun Doo-hwan's government, his massacre would have been viewed very differently. This isn't groundbreaking analysis or anything, but I do find it interesting.

(An interesting look at political violence in Russian and American contexts can be found in Prison Memoirs of an Anarchist, in which Alexander Berkman points out that while 'propaganda by the deed', or assassination of symbolic political figures might have an effect in Russia, where class oppression was felt clearly by peasants, in America, where people believed they were responsible for their own destinies, such an act would little symbolic value or practical effect.)

I've made a similar comparison before (in the context of the use of the word 'terrorist'), between the Koreans who killed D.W. Stevens in San Fransisco in 1908 and Yun Bong-gil (who killed a Japanese politician and a general in Shanghai in 1932), and Cho Seung-hui, the Virginia Tech killer. What was interesting about Yun and Cho was that, for Koreans, they were both accorded importance because of their nationality/race and their targets. Yun is regarded as a hero for killing symbols of Japanese oppression, while Cho's actions were accorded a significance by Koreans that Americans didn't understand, as Koreans believed that because Cho was of the same race - the same bloodline - Koreans in general were responsible as well, and there seemed to be a great deal of embarrassment felt because of Cho's actions, with the Korean ambassador to the US apologizing for Cho's actions, something that mystified American observers, who saw Cho simply as another nutcase who had access to guns, and whose actions were seen in the context of the gun control debate in the US. Cho's actions were seen symbolically in racial terms by Koreans, and as a symbol of what was wrong with US gun policy by Americans.

I suppose in that case when considering the difference between assassination and murder in a Korean context, Cho makes for a better comparison than Woo, who has been forgotten in Korea.

Thank you very much for your response. I was actually surprised to find this blog, since you have so much detailed knowledge about Korea and her history. Your insight on Korea is really wonderful and impressive.

I agree with some of your points, especially your observation of Koreans’ collective reactions to Cho seunghui’s crime. “Uri” mentality predominates in Korean culture, while Americans are more true to individualism.

On the other hand, I think Ito’s opposition to annexation was a very situational one. Ito was the man who supported Sino-Japanese war to strengthen the influence of Japan in Korean peninsula.

He also proposed Russia that Japan would occupy Korea and Russia would take Manchuria. Russo-Japanese war broke out, only because Russia rejected the suggestion. If Russia had accepted it, Japan would have taken over Korea without hesitation.

He was less aggressive than Katsura in his approach, but he still remained as a man who had intended to occupy Korea as a colony. And he did usurp the essential rights of Korea as an independent nation.

Actually, Japan already was taking huge profits out of Korea from the victory of Sino-Japanese war. That’s why three Western countries (Russia, Germany, and France) got involved to take some profits out of it. If it had not been not for these three countries, Japan would have accelerated colonization of Korea.

The fact that Ito preferred more diplomatic approach in occupation of Korea does not make him a friendly man full of mercy and good will toward Koreans. And he did use violence in ruling over Koreans.

He was also the man who pushed through Japan-Korea Annexation Treaty of 1907, which resulted in “the internal government of Korea fully under the control of Japan. The unpublished section of the treaty also placed the Korean army under Japanese leadership, and handed over judicial and policing powers.”(wiki) It was not the relationship Ito often claimed Japan and Korea “co-operate together like brothers”. It was just a cheap diplomatic shots to justify Japanese occupation.

In my analogy, Ito was a man who preferred to take more time in raping a woman and embellish his dirty acts with diplomacic words, while Katsura was a hot-tempered man who tried to be hurried to rape her by force. Both of them were the rapist actors in the same set of play with different colors of roles. Actually, one might feel more humiliated by the former.

And I would make distinction between Ahn and Cho. Ahn’s action was for the benefit of Koreans at least to encourage the spirit of independence, while that of Cho was nothing but ruthless random killing out of mental illness.

Ahn’s assassination was, as he asserted after his arrest, an action as a Korean military officer to defend Korea. I think it was a legitimate use of violence to defend one’s nation from the invaders. Ahn claimed he killed Ito as a war enemy.

This might have resulted in the acceleration of more complete annexation of Korea, but it was already scheduled as assured in the secret agreement of Katsura-Taft, as Donald Gregg, the former Ambassador to Korea recognized US’s responsibility in the annexation of Korea.

Ahn’s action might be comparable to that of Joan of Arc who defended France from English invasion or Dietrich Bonhoeffer who attempted to assassinate Adolf Hitler:

"If I see a madman driving a car into a group of innocent bystanders, then I can't, as a Christian, simply wait for the catastrophe and then comfort the wounded and bury the dead. I must try to wrestle the steering wheel out of the hands of the driver." - Dietrich Bonhoeffer.

And I think Ito already had damaged enough Korea under his rule. And his longevity could not make the situation of Korea a lot better. Ahn’s action was a legitimate self-defense against intruders to one’s home country, as Americans are allowed to use arms against rapists who came into one’s house. His action was at least a fulfilment of justice about what Ito had done to Koreans.

In retrospect, the consequence might got worse, but it was significant enough for Koreans at that time and in the future. Ahn might expected another Ahn’s might do the same thing to Katsura or any ruthless intruders to Korea in the future. I assume that was what Japanese were afraid of and that was why they hid Ahn’s dead body and grave site.

Congratulations. In your attempt to be funny, you've revealed that you know nothing whatsoever about the Korean people.

Joan of Arch and Ahn were both Catholic. And Catholic Church teaches that in certain cases use of violence is justified. Soldiers kill enemies in the war does not make him criminal. Ahn killed Ito as an officer of Korean Eubyong during war-like situation when Korea was declining by the invasion of Japan..