How Hahn Dae Soo became famous, then infamous, in just over two weeks in 1968

My latest article for the Korea Times is a combination of archival research and interview. Jon Dunbar was kind enough to invite me along to his interview with Hahn Dae Soo in early November, and Hahn was impressed that I’d dug up a 1968 article about him being a hippie that was published a couple weeks after he had arrived in Korea from New York. In the ensuing conversation I was amazed to realize that his stories of how he first played at the music hall C’est Si Bon and how that got him on TV the next day all took place within a week of him arriving in the country.
He also noted that he’d been tricked by the reporter interviewing him for the ‘hippie’ article, and it was only then that I realized that, of the thousands of pages of late 1960s / 1970s magazines I’ve read, he only appeared in a handful of articles, making it clear that he had shunned the media (and vice-versa), unlike pretty much every other singer of the day (Kim Min-gi would also fit into that category).
As for Hahn himself, he was a really cool, genuinely nice, and funny person, and was a lot of fun to spend time with.
Here's an excerpt of the Weekly Joongang's article about Hahn from September 15, 1968 (the fourth issue of the magazine) titled "Korean HIPPIE returns from the US": 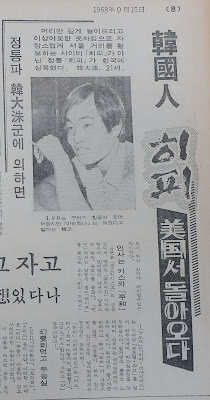 Here is a recent interview with him by the Korea Herald (where Hahn worked as a writer and photographer after he served in the Navy between 1971 and 1974). His mention of 참새구이 (grilled sparrow) obviously got a reaction from a staffer.
In my article, Hahn mentions how places like C'est Si Bon were spaces of liberation, at least to some degree, for young women at that time. This was also mentioned in a Korea Times article I wrote a few months ago about drinking culture at beer halls and makgeolli houses in 1968 and 1969. At the time, university coeds going out drinking was considered to be a new trend. Also worth noting is that three months before Hahn performed at C'est Si Bon, Korea's first (semi) nude happening took place there, announcing that avant garde artistic ideas had arrived in Korea. Hahn's arrival marked the next chapter in the arrival of such culture on Korean shores.
Posted by matt at 10:34 AM 2 comments: