The NYT and Joongang Ilbo on unwed mothers

Via Hub of Sparkle comes this New York Times article about unwed mothers in Korea, and the organizations that have been forming to help them. There are some interesting statistics noted in the article:

Nearly 90 percent of the 1,250 South Korean children adopted abroad last year, most of them by American couples, were born to unmarried women, according to the Ministry for Health, Welfare and Family Affairs.[...]

According to this, "In the first half [of 2009], a total of 240,700 babies were born" in Korea, suggesting about 481,000 will be born this year. If "Nearly 96 percent of unwed pregnant women in South Korea choose abortion", and 7,774 babies were born out of wedlock, that suggests around 190,000 unwed pregnant women had abortions, and according to this Reuters article, "[a]ccording to the most recent figures, an estimated 350,000 abortions were performed in 2005. That is equivalent to about 80 percent of the total number of babies born that year." While providing more options for these women might be one way of making this number of abortions decrease, teaching sex education might also have an effect. I'm reminded of a friend who mentioned that her co-worker was having problems conceiving a child with her husband, and said, "I wonder if it's because of the eight abortions I had?" Perhaps pointing out that abortion should not be thought of as a form of contraception would be useful. Also useful would be allowing those under 19 years of age to search for terms like 'condom' without having this appear: 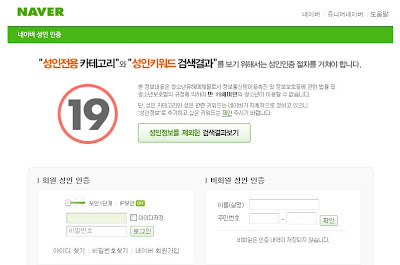 At any rate, this figure is pretty dramatic:

Of unmarried women who give birth, about 70 percent are believed to give up their babies for adoption, according to a government-financed survey. In the United States, the figure is 1 percent, the Health and Human Services Department reports.

For years, the South Korean government has worked to reduce overseas adoptions, which peaked at 8,837 in 1985. To increase adoptions at home, it provides subsidies and extra health care benefits for families that adopt, and it designated May 11 as Adoption Day.

This is certainly cringeworthy:

Only about a quarter of South Koreans are willing to have a close relationship with an unwed mother as a coworker or neighbor, according to a recent survey by the government-financed Korean Women’s Development Institute.

That reminds me of a post Lost Nomad did years ago about how no Korean would park next to the old, run-down car in the parking garage of his apartment building - guaranteeing him a good parking spot every night.

The Joongang Ilbo has a good article on the topic of unwed mothers from a few months ago:

Life is tough but it probably would have been a lot harder without the support of Aeranwon, a Presbyterian Church institution in Seodaemun District, western Seoul, founded in 1960 by American missionary Eleanor C. Van Lierop initially to protect runaway girls and female prostitutes.

Aeranwon runs a center in Seodaemun District that accommodates up to 40 unwed pregnant women and their children. The name of the organization means “implanting love in people” and it was the Korean name of Van Lierop when she lived in Korea. The group provides career counseling plus advice on adoption and living as an unwed mother in Korea.

Since 2004, the organization has seen a 58 percent rise in the number of unwed mothers using its facilities who decide to keep their children. Many of these women, termed “unwed” to differentiate from “single” mothers who might be widows or divorced, have been rejected by their families.[...]

When pregnant women, most of whom are usually in their 20s, go to stay at the center during their pregnancy, they are given a chance to consider whether they should keep their child or not. Before making a decision, they are given a thorough overview on what it would take to rear a child as an unwed mother in Korea. They are also given information on adoption. According to Aeranwon, 48 of the 59 unwed mothers who gave birth at the institution in 2007 chose to keep their child.

The women can stay at the center for three months after their child is born and then Aeranwon arranges for the unwed mothers to be transferred to a nearby mother-child center, also run by the Presbyterian institution, where up to 14 women and their children can stay for up to 18 months.

As you might notice, the focus of this article is more on teen unwed mothers, about whom it offers this unsettling information:

According to a survey of 308 single mothers between 2001 and 2004 by Aeranwon, unwed mothers who stayed at the institution ran away from home at age 13 on average and became pregnant at age 16. Most of them could not finish high school. Soon after giving birth for the first time, they became pregnant again.

“They need someone who can protect them while they are wandering the streets. They often end up finding themselves with strangers, mostly men,” Han said. “As soon as they become pregnant, they are abandoned.”

This could be the fate of the girls described here.

While there have been significant improvements in the facilities offered to unwed mothers - there are now 15 mother-child centers in the country for these families - prior to 2007 most shelters for unwed mothers couldn’t accommodate children, since most of the women are expected to give up their kids for adoption.

The article goes on to look at how those who adopt are more favored by the government than unwed mothers - read the rest of the article here. I loved this statement:

However, a government official defended current policy. “Adoptive parents are raising children who are not their own,” said a family policy deputy director of the Ministry of Health, Welfare and Family Affairs, who declined to be named. “That’s why the government is giving them more support. Besides that, it is not possible to provide single mothers with everything they need. That means we have to pay more taxes,” he said.

If you ever wanted to play 'online research scavenger hunt' and drag it out forever, just ask the players to find a statement by a government official that makes any sense at all.
Posted by matt at 9:57 AM

It's ridiculous that on the one hand, the government encourage giving birth as a solution of low birth rate and on the other hand, they put emphasis on adoption more than help unwed mothers with children.
Unwed mothers or single mothers they both can't avoid social
prejudice in Korea society (it would be harder for unwed mothers to overcome the prejudice than devorced mothers.) and most of them have no protection or no benefits I think.
The government supports mother-and-child families WITHIN budget
but it's hard to be up to the standard.
I hope the government increase the budget for welfare rather than other developement.
Especially, there should be social protection for teenage unwed mothers.
It's important to promote responsible sex education and change recognition about childbirth and bringing up.
"Life is precious."

On a side note, there was a period of time, (maybe a year ago?) where you couldn't find out the sex of the child before it was born due to the majority aborting the females only.

On a side, side note....=)
I have read hundreds of polls and statistics based on Korean sources while I studied the language for the last 2 years, and so many of them seem just plain bogus.

I guess this following statement could be attributed to any country but Korea in particular really needs to start educating about birth control and sex education.

Majority of the sex education campaigns that we see on the streets are about disease control rather than sex education.

When you bed a Korean girls, rarely do they asks about condoms and if one does, its usually because she suspects foreigners carrying some type of STD not because of the possibility of getting pregnant. Something needs to be done to change that type of mentality.