In the past week or so we've had two National Assembly Representatives make mention of foreign English teachers.

This Newsis article from October 19, titled 'Park Min-sik: “The flood of unqualified native speaking teachers is the Government’s responsibility,”' hasn't been translated yet, so let me summarize it: 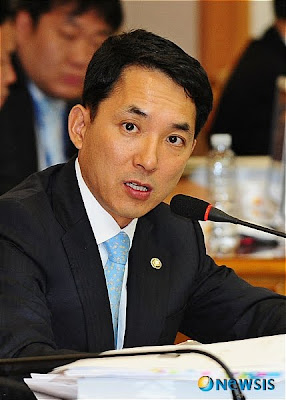 It has been pointed out that the government needs to take more responsibility for their lack of supervision over the problem of unqualified native speaking teachers.

National Assembly Legislation and Judiciary Committee member Rep. Park Min-sik (a GNP representative from Busan) said on October 19 that the government's reckless teacher confirmation process is the cause of the problem of unqualified native speaking teachers.

Rep. Park said that there had been suggestions to amend part of Article 76 of the immigration control enforcement regulations six times in the last five years and that visa requirements had been inconsistently (or repeatedly) strengthened and eased and that this had led to weak management of foreign teachers.

The problem grows out of the fact that the door is left wide open so unqualified native speaking teachers can come easily and only when public opinion strengthens is the door locked. The government tacitly stands by as this low quality supply grows.

According to Rep. Park, as of the end of July this year there were 21,498 E-2 visa holders in the country, and since 2005 the number has steadily increased by more than 2,000 every year.

---
A few notes: This outburst was published only at Newsis and here (it's exactly the same). It didn't get a lot of attention, obviously. While he makes no description of what this foreign English teacher 'problem' is, or how many are involved in it, or say anything specific at all, I have a feeling this was part of a larger conversation, considering Rep. Park's appearance in later articles about the child sex crime task force that was created in the wake of the furor over the Na-yeong case. In that case, Newsis deserves criticism for posting such an article.

In fact, he appears in Korean language articles about the need to permanently ban foreigners with a record of sex crimes against children in Korea (which is necessary, one assumes, because they weren't doing it already?). "An article about this appeared in English in the Korea Times, (as Brian and Stafford have already noted): 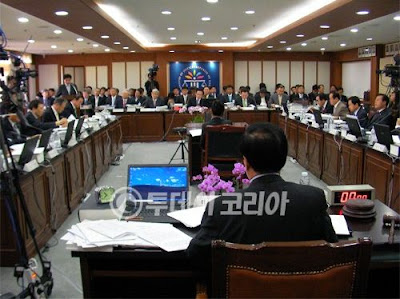 The Ministry of Justice said Thursday it will revise immigration rules to ban foreigners found guilty of raping Korean children from re-entering Korea permanently. This is the latest in a series of government measures to keep sexual predators away from society.

If endorsed, it will become the toughest discipline against foreign rapists. The plan was made public during a parliamentary inspection of the ministry held in Gwacheon, Gyeonggi Province. [...]

In the inspection, Rep. Lee Joo-young of the ruling Grand National Party urged the ministry to tighten the rule on E-2 visa issuance, arguing it’s so lax that many convicted foreigners attempt to cross borders with legal residential status. The legislator did not disclose the exact number of foreigners caught for the violation.

Under the law, E-2 visa applicants are mandated to submit records on their criminal histories and health checkups particularly on AIDS and drug use, which are issued by their country of origin.

But the legislator said it still falls short of thoroughly screening out the entry of rogue foreign nationals. "Many foreigners have been caught attempting to pass through the immigration process with forged documents, indicating rules should be intensified further," Lee said.

So, in a single week we have Rep. Park Min-sik complaining about how the government's lax supervision has led to the 'foreign English teacher problem'TM while Rep. Lee Joo-young has complained about an undisclosed number (only 'many') of convicted foreigners getting E-2 visas.

What's even better is that in this Joongang Ilbo article about the ban on foreigners convicted of sex crimes in Korea, only a paragraph separates Rep. Lee's comments about the need to 'tighten' E-2 visa rules from a comment by Rep. Park, who invokes the 'Anyang elementary schoolgirl murder', Jo Du-sun, Yu Yeong-cheol, and Gang Ho-sun as examples of how the public gets upset and the government promises to make changes, but their response is too weak, and more needs to be done to create effective prevention, punishment and management measures and a strong legal safety net to protect victims. Not bad advice at all, but putting a vague reference to the threat of foreign English teachers next to references to serial killers, child killers and rapists is not very helpful, and the Joongang Ilbo deserves criticism for this.

What's even less helpful is not backing up such assertions that foreign teachers are a threat with any proof, examples, or facts whatsoever. While I realize politicians are lashing out in all directions and trying to look useful in response to public anger over the Na-yeong incident, and foreign teachers who work with children are worth considering, their low crime rate - and the low crime rate of foreigners compared to Korean nationals in general - might suggest that worrying about potential Korean criminals might be the first order of the day. The media also deserves a lot of blame as well, seeing as Rep. Park's comments were obviously removed from their context by someone at Newsis eager to put out a negative story about foreign English teachers, and who forgot - or deliberately left out - an explanation of what exactly the English teacher problem was. Or perhaps it wasn't necessary after all, considering the irresponsible statements from National Assembly members over the past few months, and the years of negative reports about teachers arrested for drugs (fair enough) and reports questioning their sexual morality and connecting them to AIDS (many of them courtesy of Anti English Spectrum). While this is just how the news works, it can be argued, try comparing the incidence of stories like these to positive stories about individual foreign teachers (like this or this). It would be an interesting (if lengthy) project to do so, but I'm sure the outcome would be no surprise.

I think it is far too late to ask for specifics about just what the "Foreign English Teacher Problem" is. Much like Hitler's "Jewish Question" it is a catch-all term that means many different things to different people, but it is useful to drive forward the concerted effort in government and the educational sector to blame foreigners for the failings of Koreans. Colour me sick and tired (but not surprised) of such general statements being used to disredit a group of people as disparate as English teachers in Korea today.

I have a +10 year old Canadian criminal record for having sex with a minor (16 years) but it was consensual. I don't have AIDS or any student loans, does this mean I can renew my E2 visa under current legislation?

When an E-2 English teacher is ready to challenge the press bashing -- and I'd say the blatant defamation in the KT piece (making the Na-Yeoung case about E-2 visa holders)is a good place to start -- let me know.

My sentiments exactly, Bob. E2 teachers are a convenient hard target. We don't wike it we can go "whaaaa" and weave. Not many people want to help the poor little rich university educated white kids. It ain't fair, philosophically but as Ben hints below there is remediation possible. But for most getting on a plane, showing Korea your ass on the way out, and telling everyone back at home not to buy a Hyundai is the preferred solution.

I always like to contrast that with the 3D workers here. They've gotten a lot of stuff done and as far as I can tell you don't hear Korean politicians vilifying them. There's a whole wing of the UN out to protect them and the 3D workers are willing to get their heads beaten in. But as I noted above, they don't have a nice life to slip back into.

Inseoulent: I'm pretty sure that is something you would want to take up with Pardon Services Canada.

Inseoulent, I doubt it. You either need to get your E-2 transfered to another place (to avoid having to get a new one), or you have to stay where you are currently working. Otherwise, you are probably SOL

Check out youseok's blog http://www.youseok.wordpress.com Th politicians are looking in the wrong direction for the criminals, but that means they would have to arrest themselves.