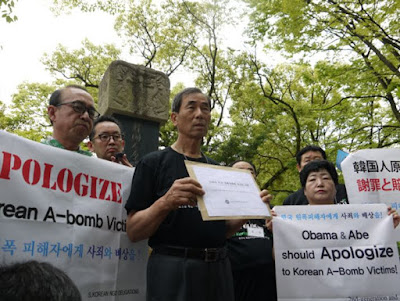 We had been deprived of our land, property, and even our mother tongue. We were driven away from our homeland. Why was it that we had to suffer? What did we do? While suffering as colonial people, we had lived to the best we could do, conscientiously. But what we were given was a living hell – the atomic bomb brought on by the war of aggression. Both innocent Japanese people and Koreans died, scattered like scraps of garbage.


My latest article for the Korea Times, titled, "Trials of Korean atomic bomb survivors," can be read here. While at the University of Washington I wrote a lengthy paper on this topic for Kenneth Pyle's seminar on the historiography of the atomic bombings of Hiroshima and Nagasaki, and he encouraged me to do further research and publish it. I'll return to it one of these days.

It still amazes me that almost 20 years passed without any attention being paid to the survivors in South Korea. The earliest articles I could find date from 1964. The Korea Times article that appears with my article covered the topic with more sensitivity than most articles from that time - here it is in full: 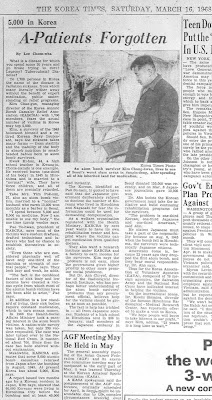 Interestingly, I think the Kwak Ki-hun mentioned in the article may be the same 곽귀훈 whose lawsuit won the right in 2003 for overseas survivors to receive benefits from Japan. (He is mentioned and pictured here.)

For more recent articles, here is a 2010 Korea Herald article titled "Sufferings still linger for Korean A-bomb survivors." For more on the struggles of second-generation atomic bomb victims, this letter by Han Jeong-soon (on the right in the photo at top), honorary chair of the Association for the Second Generation of Korean Atomic Bomb Survivors, is well worth reading.

One of my arguments - influenced by Scott Burgeson's essay 'Stranger in Chongno' (particularly this page) - is that to bring up the atomic bomb victims is to bring up the atomic bombs that brought about Korea's liberation from Japan. I looked through more than a dozen middle school history textbooks, and two high school textbooks, and here are typical examples of how liberation was dealt with: 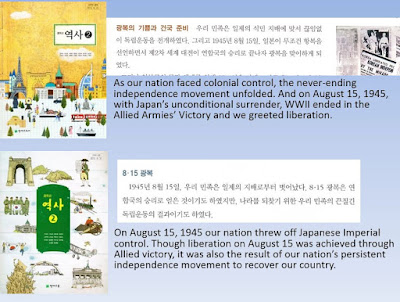 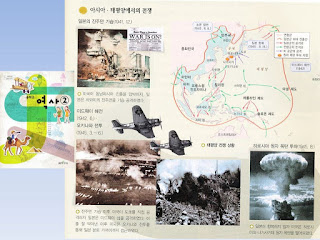 (The textbooks also had a WWII atrocity page equating comfort women with the holocaust, the rape of Nanking, and the use of atomic bombs.)

Not mentioned in my article was the fate of North Korean survivors. What sources I could find suggest the vast majority of survivors returned to southern Korea and stayed there. Those that did end up in North Korea did so when Japan repatriated Koreans in Japan to North Korea beginning in 1959 (over 90,000 ultimately returned). Among them were likely over 1,000 survivors. In the 1990s Japan began considering how to address this issue (should DPRK citizens seek treatment in Japan) and in 2001 Japanese doctors visited North Korea and confirmed 938 survivors were still alive. The political fallout of North Korea admitting to kidnapping Japanese citizens, along with other incidents and the restarting of the DPRK's nuclear program made further contacts difficult. In 2008 North Korea announced that 382 survivors were still alive.

I've barely scratched the surface of this topic here, really. I'll return to this topic, but for now here's a section from my paper's conclusion:

"On May 20, 2013 Joongang Ilbo editorial writer Kim Jin published a column which, based on the idea that “God sometimes borrows human hands to punish human evil,” argued that “Hiroshima and Nagasaki were the revenge of Asians sacrificed for Japanese militarism,” particularly those killed by experiments of Unit 731, which referred to its test subjects as maruta, or “logs.” Castigating Japanese Prime Minister Abe for a lack of repentance, Kim wrote that “He is free to act as he wishes. But God also has freedom. It is God's freedom to judge that the marutas’ vengeful spirits have not yet been appeased, and that therefore the lightning that struck Japan was not enough.” Unsurprisingly, members of the Japanese government protested the column, while a press release by the Association of Second Generation Korean Atomic Bomb Patients “strongly condemned” the column and demanded Kim and the Joongang Ilbo apologize. At the end of his next column a week later, Kim wrote, “I regret if, contrary to my intentions, I hurt the feelings of Japanese atomic bomb victims or their bereaved family members." If it did not seem to occur to Kim to apologize to Korean survivors, one reason may be that no major Korean news outlet reported on the Second Generation Association’s press release.

The above episode highlights both the way in which the Japanese government has successfully claimed the atomic bombings as an example of uniquely Japanese victimization as well as the continuing marginalization of Korean atomic bomb survivors within South Korea. Though the South Korean Foreign Ministry ultimately responded positively to President Obama’s visit to Hiroshima, saying, “It is meaningful that he mentioned Korean victims on par with U.S. and Japanese victims in his historic speech,” it would seem that diplomatic parity was the government’s main goal. The fact that a toothless Special Act to Support Atomic Bomb Survivors, which had made no progress after eight years in the National Assembly, was passed only a week before President Obama’s speech suggests that the South Korean government may have wished to avoid being seen as hypocritical when asking for special mention of the atomic bomb survivors it had ignored for decades."

Also worth noting: After years of court cases aided by Japanese activists, South Korean survivors of the atomic bombings of Hiroshima and Nagasaki now receive better treatment from their former colonizer than they do from their own government.
Posted by matt at 2:08 AM No comments: