The Facebook page for Designersparty is well known for posting historical photos of Korea by the hundreds, though perhaps a better description would be that it is 'notorious for' doing so, since it does so without permission and most of the time does not list any information about the source or photographer. That said, occasionally, interesting photos pop up on my timeline, like one I saw today that is supposed to be Yongsan in 1927. 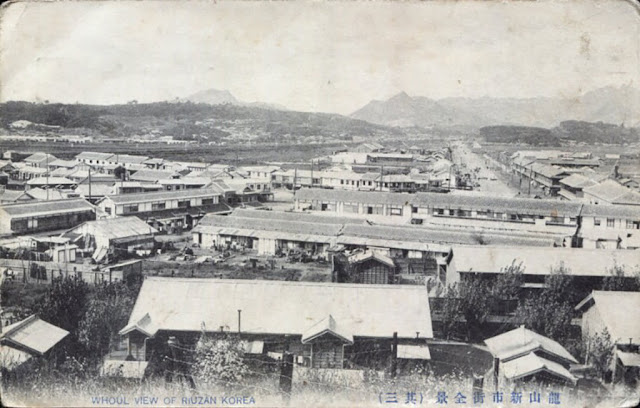 I immediately noticed that the street it focused on was pointed at Inwangsan and also was blocked by the building in the foreground. A look at an online map instantly made clear that what we are seeing here is Samgakji intersection, back when it was clearly triangle-shaped (hence the 'samgak' in its name). I placed it side by side with a section of this 1946 US Army map of Seoul (which is, itself, based to a great degree on a 1939 Japanese map).

The arrow and red lines show the vantage point and parameters of the photo, the coloured streets are matched, and the red circle denotes the apparent location of that forested section on the right (note the topographical rise in the top right corner of the map). [Update - I'm wrong about where that hill - actually likely two hills - is; the closest, on the left, is actually 600 meters to the north, in Galwol-dong, just north of the northern boundary of Yongsan Garrison, while the other hill is further northeast and closer to Huam-dong (hat tip to Jon Dunbar).]

The street in purple is today's Hangangdaero. On the map you can make out a stream flowing south and running parallel to this street, and in the photo you can just make out the banks of the stream and perhaps the train line. That is what is known today as Manchocheon, which today runs almost entirely underground; the best exploration of that stream and its history is Jon Dunbar's Transactions article "Exploring Manchocheon, Seoul’s Underground River," which can be downloaded here (scroll down to Volume 93, the second-last volume).

What's interesting is that there doesn't seem to be any development beyond that what is now Camp Kim (army warehouses) on the left of the street, and, on the right, beyond the tributary of Manchocheon that runs through Yongsan Garrison and under Gyeongnidan today. Also interesting are the tree-covered hills on the right, which today are covered in buildings.

At any rate, the photo speaks to a time when Yongsan and central Seoul were apparently separate from each other, even though Yongsan had been incorporated into the city by that point.

Here is an updated version of the map, using the 1927 map I found here. It would seem that the forested area in the blue circle is the spur of Namsan that can still be seen today, where the Chosen Shinto Shrine was built. Considering the lack of buildings in the distance in the photo, compared to the urbanized areas seen in the 1927 map, this photo must be from either the early 1920s or the 1910s.

I’ll be leading an excursion next Saturday, April 16 for the Royal Asiatic Society to the Gungsan area, where we will visit Yangcheon Confucian Shrine, Gyeomjae Jeong Seon Museum, and the Gungsan Tunnel History Exhibition Hall. We will then visit Gaehwasan (near Gimpo Airport), a low mountain covered with temples, tombs, a Korean War memorial, and spring flowers; it also overlooks Haengju fortress, site of Imjin War and Korean War battles.

For more information about the tour, see here (though I'll note that the mountain part of the walk will be only about a 2 km-hike now).

This past weekend I headed over to the area to make sure everything was open and accessible and took a few photos: 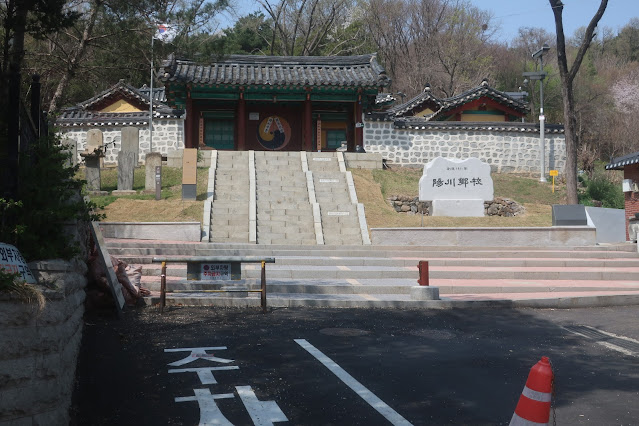 Yangcheon Hyanggyo, or Confucian shrine and school, first built in 1410 and the only remaining part of the government complex that was here when Yangcheon was its own prefecture during the Joseon era. 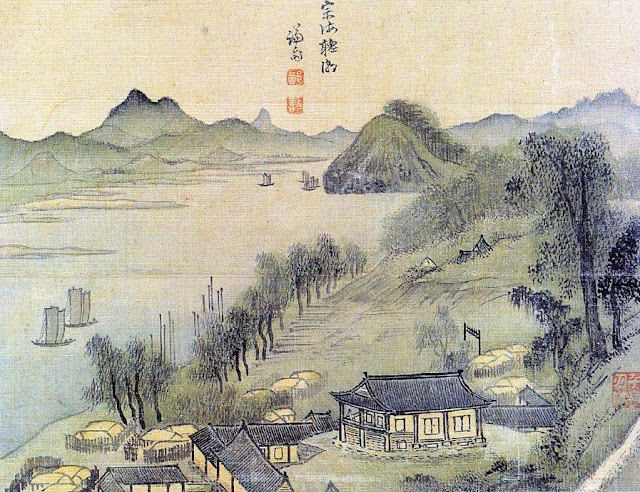 Painting of part of the Yangcheon magistrate's complex by painter Jeong Seon, who served as magistrate from 1740-45 and has a museum dedicated to him, Gyeomjae Jeong Seon Museum, nearby. 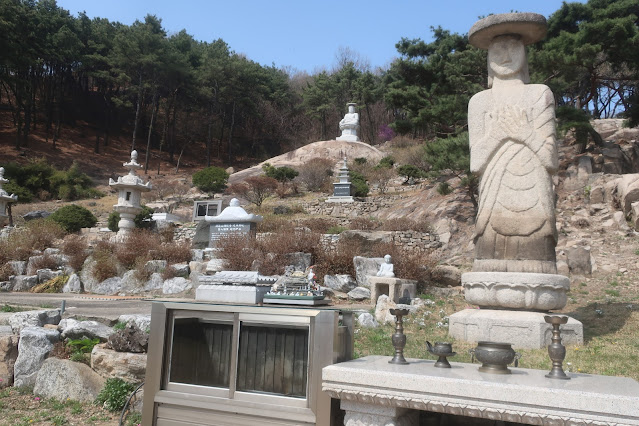 Mitasa Temple, with its large Buddha statue dating from the late Goryeo period. 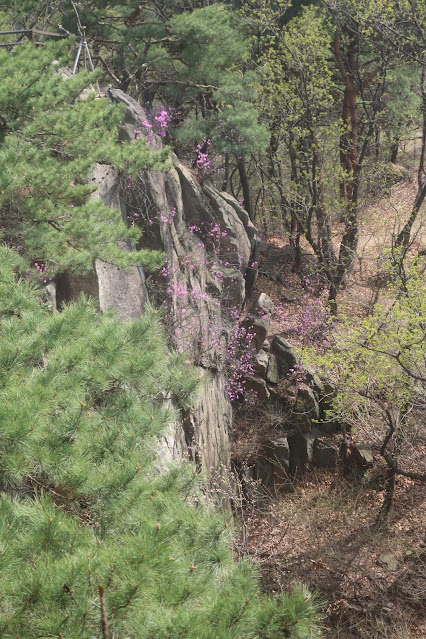 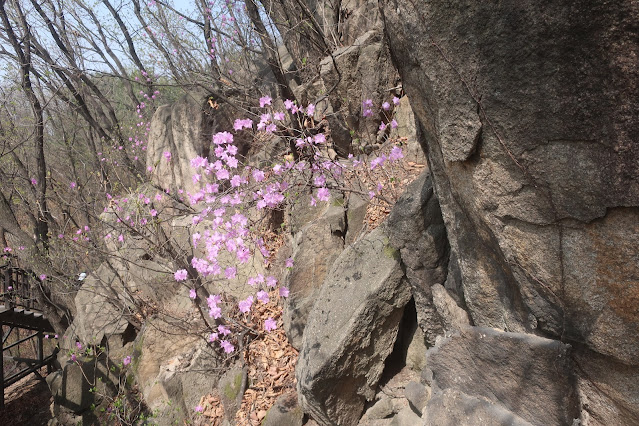 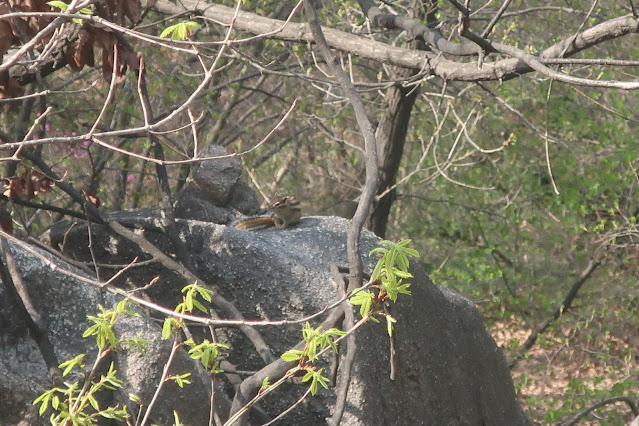 I lived next to Gaehwasan for 11 years but this was only the second time I'd seen a chipmunk there, pointed out to me by a man who was throwing rice grains in its direction (and then getting annoyed when a bulbul landed and started gobbling them up). 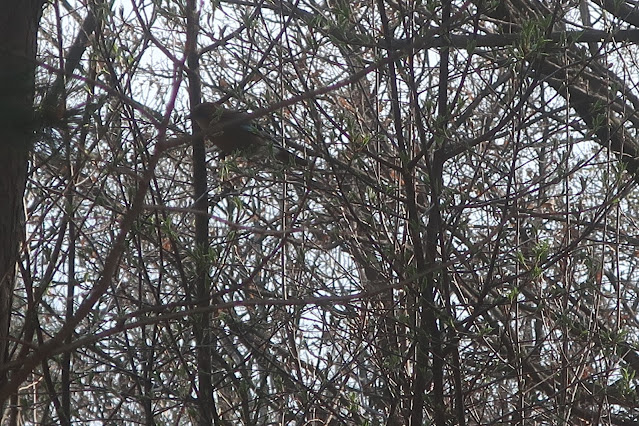 I suspected this was a Eurasian Jay (어치), though I wasn't sure until I was able to zoom in on this photo at home. I'd seen them near my house in central Seoul, but it was the first time I'd heard one, and they make the oddest sound. 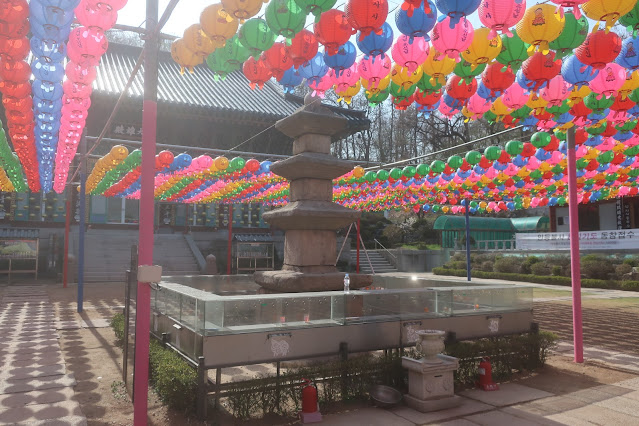 Yaksasa, which likely dates back to the late Goryeo or early Joseon era, judging by its pagoda and a statue. 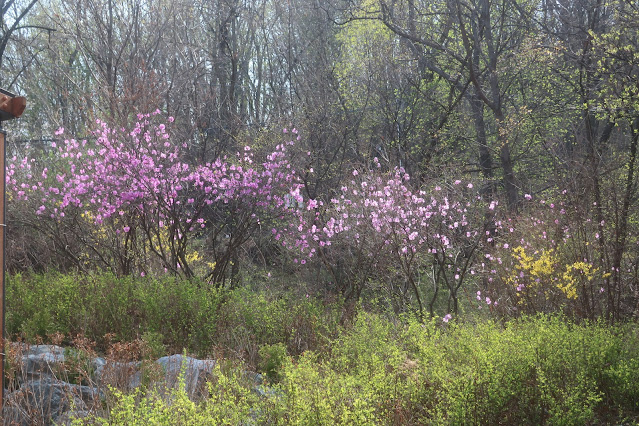 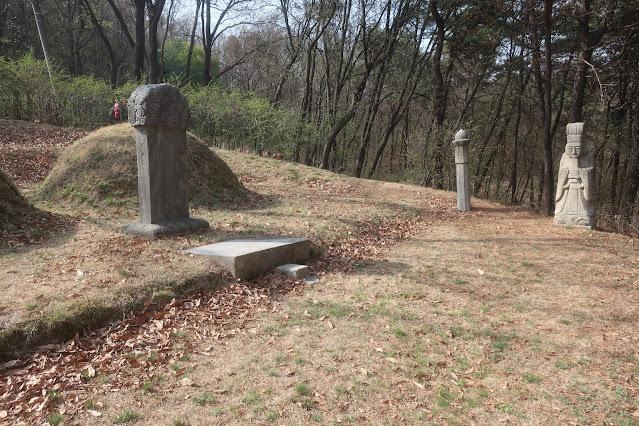 One of the many tombs of the Pungsan Shim family, whose members helped overthrow Yonsan-gun and, generations later, organize righteous armies during the Imjin War.
Posted by matt at 3:33 PM No comments:

What happens when an American electrical engineer – almost certainly of Russian ancestry – works in Korea between 1947 and 1948 as part of the postwar US military occupation and hears Koreans saying, “네, 네” and thinks, “Hey, that sounds like the Greeks I heard saying ‘ne, ne,’ which also means ‘yes’”?

Well, you get Wladimir W. Mitkewich’s completely wrong-headed 1956 book “Koreans Are White,” which attempts to prove that Korea is a long-lost Greek colony. 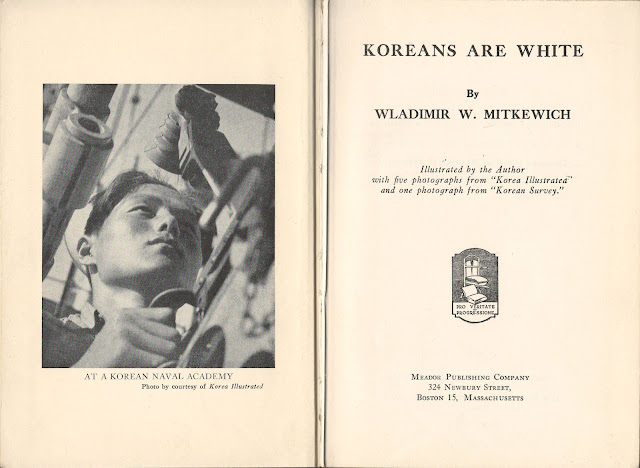 I first learned of this book in the essay “Incredibly Strange Books About Korea Written By Honkies,” which appeared in Scott Burgeson’s book ‘Korea Bug’ (2005; also originally in his zine, Bug 5, 2001). I stumbled upon it in the stacks of University of Washington Library and scanned it. It’s only 44 pages long, with 30 pages of text, so it’s a quick, unintentionally-amusing (if not exactly mentally nourishing) read.

The book can be read or downloaded here.

[Update: And then Robert Neff reminds me of Scottish writer N. McLeod's "Korea and the Ten Lost Tribes" [of Israel] - another book Scott reviewed in his "Incredibly Strange Books" essay.]