Another effortless-looking win for Kim Yuna

I heard the sound of an announcer discussing figure skating today as my dad flipped through channels and decided to google 'Kim Yuna' to check if she was competing and the first response was this, saying that she'd won the Trophee Eric Bompard (but little more - I had to check her record to confirm that she'd just set a new one). As it turned out, due to the delay in broadcasting, she was on next, and I caught her performance. As my mom put it, 'She makes it look effortless.'

Odd how that google page for Kim Yuna has several representative photos of her, and one of them is on my blog. Every victory for her brings a bunch of visitors my way...

Philip Hersh's LA Times sports blog was also linked on that page a few hours ago, in which he wrote

It took me less than three minutes to realize that Kim Yu-Na of South Korea should simply be presented the 2010 Olympic women's figure skating gold medal right now.

And that was just after the short program, and not the record setting long program, which left her 36 points ahead of the second place winner (Mao Asada).

I noticed Mark Russell also quoted from that blog in a post about Pyeongchang's 3rd attempt to bring the Winter Olympics to Korea in 2018, and if that doesn't work, in 2022, and if not then, in 2026 - Pyeongchang is the little train that could. This latest attempt comes after bidding to host the 2010 and 2014 Winter Olympics - the failure of the latter which brought on contagious crying enforced by the presence/surveillance of the media and this beauty of an opening sentence by Jack Kim writing for Reuters).

In 1992 Jason Priestly hosted Saturday Night Live around the time of the Winter Olympics and did a figure skating skit. Then Beverly Hills 90210 star Priestly had been a figure skater when he was younger and - as every Canadian newspaper or magazine article dealing with him was required to mention - growing up in Canada. Canadians find Korean media reports on successful Korean Americans familiar, or at least they should. Gord Sellar puts it more succinctly when, describing how "Korea... shares with Canada a long history of being peripheral", he writes that "Just as with Canada, Korea’s tendency to over-celebrate its profile on the global scale can make Koreans (like Canadians) look like fools." At any rate, Priestly's skit involved him skating while Phil Hartman and Dana Carvey (as Toller Cranston) provided commentary, and every time Priestly tried a jump, he fell. It's a great piece of physical comedy, helped by Hartman and Carvey intoning 'Ohhhhhhhh' every time he falls, and made funnier when it just cuts to them talking and interrupting every sentence every time he falls: "The competition here has - ohhhhhh - been wonderful this year.' 'Yes, they - ohhhhhhhh - You know, he really should just - ohhhhhhh - he really should just stop.' If Pyeongchang doesn't win the 2018 Winter Olympics, they might just want to take that advice.

As for Kim Yuna, is it just me, or is the photo below more Chosun Ilbo than AP? 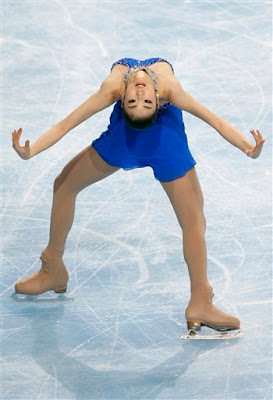 Here is the video for her long program. Watch it quick, before YouTube bows down to The Man and removes it. Again.