[Update: The Chosun Ilbo has an article about this here.] 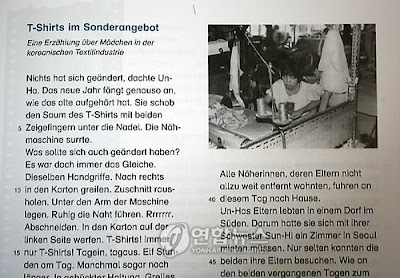 From an article at nate.com, a Korean officer studying at the University of Bamberg in Germany discovered that his daughter's German language elementary school textbook contains some rather interesting information about Korea. In a section describing child labor in countries like Guatemala, Peru, Colombia, India, and El Salvador, South Korea is also mentioned, as it describes the life of a 13 year old girl in Seoul who works 11 hours a day in a cramped sweatshop with no windows and stale air ( the sort of conditions Jeon Tae-il fought to reform, before committing suicide in protest in 1970).

The textbook is used in schools in Bavaria, Saxony, Saxony - Anhalt, and Thuringia. The embassy contacted the publishers, and the officer wrote them as well, and they apologized and said they would correct it in the next edition.
Posted by matt at 6:37 PM

Good on the father. How absurd that such tripe was in a school textbook.

Korean sure aren't shy about correcting injustices they find in depictions of of themselves in foreign countries - as well they shouldn't be.

Ridiculous!Do we have to distinguish if it's true or not even from textbooks?
School textbooks should be reliable for weary brains..

Tripe? While their aren't perhaps that many 13 year-olds in Korea living this way, I'd bet this describes the life of a Korean textile worker quite well (I have done my best to translate, let me know if you disagree):

T-Shirts on Special Offer
A Story about Girls in the Korean Textile Industry
Nothing has changed, thought Un-Ha. The new year begins exactly as the one before had. She shoved the mass of T-shirts with her two fingers under the needle. The sewing machine purred. What should/could have changed? It was always the same. The same manual labour. Throw it in the box on the right. Carry it outside. Lay the machine under your arm. Quietly spend the night. Rrrrr. Break. Throw it in the box on the left. T-shirts! Always t-shirts! Day in and day out. 11 hours per day…All those closest to her, whose parents didn’t live so far away, drove home on this day. Un-Ha’s parents lived in a village in the South. As a result, she had had to rent a room in Seoul with her sister Sun-Hi. The two of them could only seldom visit their parents. As their days went by…

-And yes, Helen. You should have to distinguish even from textbooks. Or do your Korean teachers tell you to believe everything you read?

Thanks for that, Bob. Actually, quite a few of those girls who worked in sweatshops in the peace market along Cheonggyecheon in the 60s and 70s are still working in the area in not so different conditions, at least according to Jeon Tae-il's sister.

I still think its tripe, if one is trying to educate people about child labor abuses in "t-shirt sweatshops" around the world - South Korea is not your focus country.

Whether or not there are individual abuses is another question. And if there are and these are to be included, then Germany better update the textbook to add the US to the list: http://www.nytimes.com/2009/05/21/nyregion/21rooms.html?_r=2&ref=nyregion

I'd hope someone would see these inaccuracies and realize it's a part of the process of textbooks. It's sad to think someone believes they can change textbooks simply by observing it and then writing a letter. God forbid we should ever try to set straight the written word. Let it go and give children an opportunity to find a truth.

The day that Korea gets rid of misrepresentations of people from other countries in its textbooks is the day that I agree this is tripe.It's outdated, but it's not tripe.

I just wonder if Dangun was a real person. I read that huge books related to ancient history died out in Japanese colonial period.

That sounds fair enough to me Bob...