I'm Back / Maps and Stuffed Pigs

Hmmm, I guess it's been a 2 month absence.

I've just been busy - I had extra 'vacation' classes in January, plus I was doing a lot of internet-based research on my family's history. I found out I had a Great(x5)Uncle who served on the Beagle when Charles Darwin made his trip to the Galapagos; but most of the research I did was based around my Great Grandfather's WWI journal. It's short, as he served for only a few months before the war ended, but as he served in Italy, there wasn't much information online (or off) about the battle he fought in when I first read his journal 5 or 6 years ago.

On a whim I tried again back in January and, due to the proliferation of websites about the Italian front, and with the help of mapquest, google earth, and even italian ski maps of the area, was able to find out where almost all of the locations mentioned in his journal were and plot them out on a map. It needs to be edited for clarity, but I'm happy enough with it for now. 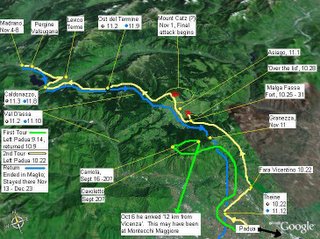 It's very rare for me to watch tv at home, but some friends suggested HBO's Rome and Carnivale, which are both excellent (and addictive) series, and which kept me busy as well. Add to that having friends from home come to visit, and it made for a rather busy two months.

I did actually collect info for a few posts (about the investigations into the People's Revolutionary Party and East Berlin Spy Ring incidents) which I'll post soon, as well as a post on the furor over revising sex crime laws in the wake of the murder of an 11 year-old girl.

I've also got to work on a post for Two Koreas, which celebrated it's first anniversary a few days ago. Jamie said some kind things about my posts there, but credit should be given to him for blog, and for motivating me to start posting on a blog in the first place.

I came across my post about wild boars and remembered that the first boar that was caught and killed was to be stuffed and displayed in Gildong Ecological Park a month later, so I searched and found a photo of it here; while searching for it I also found a photo of the boar killed at Changdok Palace on October 24. I don't think the picture of the stuffed boar is very good - I imagine one reason the boar seems rather small is that there's no sense of scale in the photo. Still, they do seem small enough that sending 90 police officers out to catch them seems a little... excessive.
Posted by matt at 4:08 AM No comments: