On  October 3, 1970, James Wade's Korea Times column "Scouting the City" (written under the pen name Alf Racketts) revealed that an international film production - Korea's first - was about to start filming under the name "Seoul Affair" (or "Northeast of Seoul"): 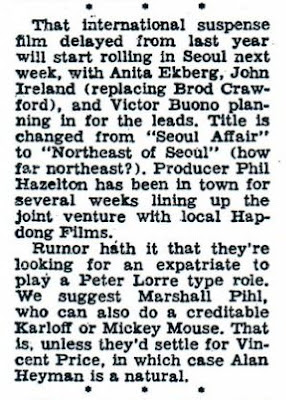 Alan Heyman (more about whom is here) wrote a score for the film, but it was never used.

On October 6, 1970, the Donga Ilbo reported that actress (or, as they put it, "glamour fox") Anita Ekberg, best known for her role in the Federico Fellini film "La Dolce Vita" (not yet released in Korea), was in Seoul for a joint American-Korean production titled "The Seoul Affair," set to start filming with director David Rich and actors John Ireland, Jon Buono, and Sin Yeong-gyun and Choe Ji-hui on October 15.

The Kyunghyang Sinmun, on the same day, in an article titled "Seoul’s autumn is very cold," also reported on Anita Ekberg (a 39 year-old "sexy fox" with the measurements 42-28-40 wearing a skirt that ended 30cm above the knees), saying that she was best known to Korean fans for the omnibus film "Boccaccio '70." 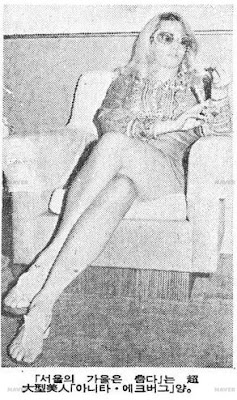 On October 10 the Joongang Ilbo published an article about the production. On October 24, in an article titled "Film like water...", the Maeil Gyeongje reported that local directors seeing the progress of David Rich's film "Seoul Affair" were astonished at his unconventional way of directing the film. While local directors would use 9000자 of film (I'm not sure what that measures) to make a movie, David Rich wanted to use 70,000자, which made his staff turn pale in shock. From their point of view, the director was using too much film, doing seven takes and only using one shot, and wasting precious film like water.

On November 7, the Donga Ilbo reported on possible other joint projects with an Italian director but nothing seems to have come of these (perhaps not a bad thing - did we really need a "Nazi gold hidden in Korea" story? Well, maybe...).

On December 21 the Kyunghyang Sinmun showed this photo of Anita Ekberg with co-star Sin Yeong-gyun: 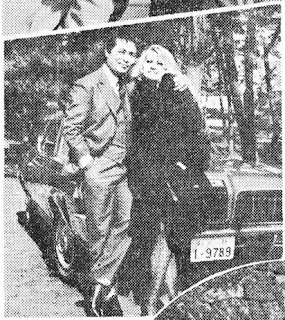 But then that was that. At least in Korea. IMDB has '1972' written next to it, and posters such as the one below can be found, but it's not clear if it was released in the U.S. or not (only a 1990 German release is recorded). 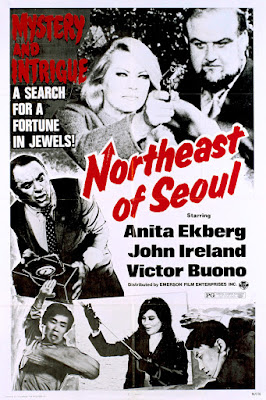 In Korea, however, years went by with no mention of this film, as James Wade notes in this March 16, 1974 column: 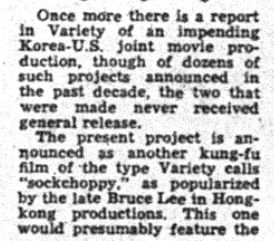 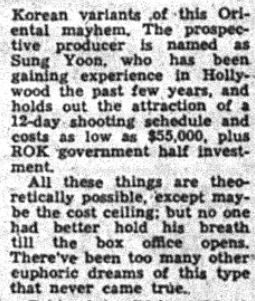 Two weeks later, however, on April 2, 1974, the Maeil Gyeongje announced that a joint Korean-American production titled "캐서린의 탈출" ("Katherine’s Escape"), was to open soon. This was, indeed, a renamed "Seoul Affair," as this poster from the April 4, 1974 Donga Ilbo reveals: 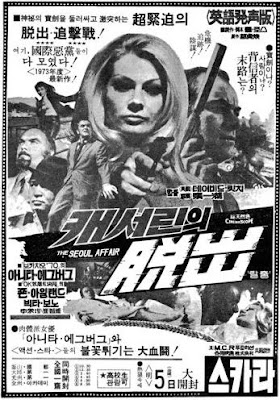 On April 9, 1974, the Maeil Gyeongje stated the nation’s first American-Korean joint production had been playing at the Scala Theater since April 5.

On April 13, James Wade weighed in with a review of the film:

Though he wasn't impressed, a week later, on April 16, the Maeil Gyeongje reported that it had brought in 34,000 viewers in the ten days between April 5 and April 14. Just to compare, it reports that a movie titled "Yu Kwan-sun" (about the national heroine of the Samil Protests in 1919 had brought in only 7,676 people in the same time period, while over 46 days the "Poseidon Adventure" had attracted 120,000 viewers. One wonders if this is correct, considering the Korean Film archive records there having been 31,291 viewers. Unfortunately, the Maeil Gyeongje's film listings section doesn't seem to be a regular feature, so nothing more is said about it.

Should you be curious to see the film, this Saturday, April 30, at 3pm, the Royal Asiatic Society Cinema Club and Seoul Film Society will have a free screening of the film at Seoul Global Center's Haechi Hall, on the 5th Floor of M Plaza in Myeong-dong.

Directions to Seoul Global Center's Haechi Hall can be found here and here, and more information about the film and screening is here.
Posted by matt at 12:32 PM No comments:

This story, about the decade or more of abuse of children and disabled people that went on at the Brothers Home in Busan, is pretty horrific. Almost as much as the government's attitude towards it:


The current government, however, refuses to revisit the case, and is blocking a push by an opposition lawmaker to do so on the grounds that the evidence is too old.

Ahn Jeong-tae, an official from Seoul's Ministry of the Interior, said focusing on just one human rights incident would financially burden the government and set a bad precedent. The Brothers' victims, he said, should have submitted their case to a temporary truth-finding commission established in the mid-2000s to investigate past atrocities. "We can't make separate laws for every incident and there have been so many incidents since the Korean War," Ahn said.

Well, we wouldn't want any more dirt on the president's father to be dug up, would we?

They ended up as prisoners at 36 nationwide facilities. By 1986, the number of inmates had jumped over five years from 8,600 to more than 16,000, according to government documents obtained by AP. Nearly 4,000 were at Brothers. But about 90 percent of them didn't even meet the government's definition of "vagrant" and therefore shouldn't have been confined there, former prosecutor Kim Yong Won told the AP, based on Brothers' records and interviews compiled before government officials ended his investigation.

The article makes a provocative claim:


Choi was one of thousands — the homeless, the drunk, but mostly children and the disabled — rounded up off the streets ahead of the 1988 Seoul Olympics, which the ruling dictators saw as international validation of South Korea's arrival as a modern country.

Except that Choi was arrested in 1982. Still, considering who was president at the time and the general 'clean ups' that take place in Olympic cities, it wouldn't be surprising. You'd think that the mass abuse of children would prompt more outrage, but keeping in mind the short sentences handed out for rape of children or the low age of consent, perhaps we shouldn't be too surprised. Maybe a movie needs to be made to draw attention, like 'The Crucible' or the one about the Burger King murder in Itaewon which resulted in the case being reopened.

Also related - since the children and inmates at Brothers House were made to work for free on goods made for export - is this story of modern day slavery on an island in southwestern Jeollanam-do; a video is here (hat tip to Gord Sellar).

This isn't anything new, however, as this November 28, 1971 Korea Times article makes clear:

Over at 10원 Tips, Sam Nordberg has found the source of this photo and reveals the extent to which it was photoshopped.

While I think of it, it might be worth revisiting the photo contest winner posted here, and this post as well.

A few weeks ago I posted about how female E-2 visa-holders now outnumbered males, and also posted images showing how female foreign teachers have been depicted in promotional material for SMOE, EPIK, and hagwons. And then I stumbled across this EPIK page:

If you click to enlarge it to full size, as it appears on the webpage, it's clear enough that... well, that the photographer and whoever designed the web page were male. Needless to say, I can't imagine EPIK depicting a female Korean teacher this way.

The sample contracts on that page declare that the "Employee shall not behave in any manner that may damage or tarnish the reputation of the teaching profession in general or of the S.M.O.E. program and the undersigned Employer in particular during the Term of Employment" and
the "Employee shall not be involved in any activities that may cause harm to the students or be of detriment to the reputation of the school, District Office of Education, and Seoul Metropolitan Office of Education." Perhaps it should add in a clause stating that the "Employer shall not depict Employees in promotional material in a way that tarnishes their image"?

Perhaps that could be said of the contract itself:


"The Employer will immediately report the Employee to the appropriate agencies once the Employer becomes aware of any illegal action (Narcotics, etc.) by the Employee and the Employee shall be subject to prosecution and punishment according to Korean Law."


Perhaps I'm overstating things, but still, there's legally covering all the bases and then there's acting like you're expecting certain illegal behavior from your employees.
Posted by matt at 3:34 PM 5 comments:

Interview with The Korea File on WW2 POWs in Colonial Seoul

Last year I posted links to an interview Andre Goulet did with me for his podcast, The Korea File (Part 1: "A History of Korean Social Movements," Part 2: "Korean Identity and Anti-Americanism," Part 3: "Weed, Counterculture and Dictatorship") and a few weeks ago he posted a the final part, "Prisoners and Propaganda: WW2 POWs in Colonial Seoul."

More about the WWII allied POWs in Korea can be found here.
Posted by matt at 12:52 PM 2 comments: