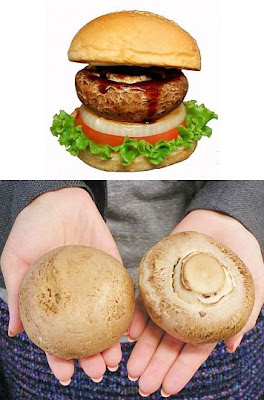 According to the Kookmin Ilbo, Japanese burger chain 'Freshness Burger' is going to sell giant mushroom burgers made from portobello mushrooms, which can grow to 8-10 cm in diameter and are high in dietary fibre and in vitamin B2. We're also told that Portobello (or 'Portabella' as it's spelled in the article) means 'beautiful giant umbrella' in Italian, though this video says that's not true at all, and if I have to decide between trusting the Kookmin Ilbo or the girl from hotforwords.com, I don't think I have to tell you which one I'd choose. 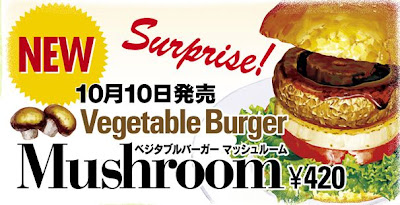 Only 420 yen - which seems pretty reasonable considering prices in Japan - or in Korea as well, I imagine, though I've never eaten a burger at a fast food place in Korea, so I can't be too sure (I've occasionally eaten hotcakes and apple pies, though the latter are no longer served, meaning I'd have no objection to people going all José Bové over their local golden arches at all).

Of course, had this burger come out in Japan more than seven years ago, another species of mushroom could have been used...
Posted by matt at 8:11 AM

Burger King has "apple pies" if you need a fix.

Didn't know that. Thanks!

i don't think i could deal with a freaky trippy hamburger

It doesn't look delicious. I like huge burgerking wapper.