As I mentioned here quite some time ago, anthropologist Linda Louis writes in Laying Claim to the Memory of May that

As a social process, the Korean cultural scenario for conflict resolution involves the public expression of grievances by both sides, as a means of informing the neighbors, of shaping local consensus, and of mustering popular support for each side of the argument.

It is above all else also a process that relies heavily on the involvement of a third, mediating party for a sucessful outcome. In fact, it is through the public airing of the dispute that the antagonists solicit the intervention of others. Intense verbal aggression and the public expression of grievances serve not as a prelude to physical violence, but function to mobilize third party intervention, to prevent just such an escalation in the dispute.

On February 16 of this year, an inmate was beaten by a prison guard and after seeing the inmate's swollen face, his father raised the issue with the National Human Rights Commission of Korea, as reported here (as well as here):

The National Human Rights Commission of Korea has made public a video clip of an Anyang Prison guard beating an inmate after the prison rejected the commission's call for the guard to be disciplined. "Even though it is clear that the prison guard beat the prisoner, Anyang Prison has refused to discipline the guard. Therefore, the NHRC has decided to release the video clip and let Korean citizens as a third party decide whether the incident is abuse or not," the human rights watchdog said on Sunday.

Nice to see the NHRC mobilizing third party intervention (though some think it's illegal here). Feel free to take part yourself:

The photo below was linked to by the Marmot a few weeks ago and the only thing I could think of when I looked at it was how odd the woman's stance is. If she had been standing next to a Korean man I probably wouldn't have noticed it, but the juxtaposition with a foreigner really made her contrived pose stand out. Her pose is like something out of a Renaissance painting depicted Mary as purity defined, but her smile and the tilt of her head is more subservient, as if she was straight out of that Manet painting of the scene in a room salon (as the night drags on, of course, it's harder to maintain that smile). So is that what whoever was in charge of this photo shoot wanted to convey - purity and subservience? 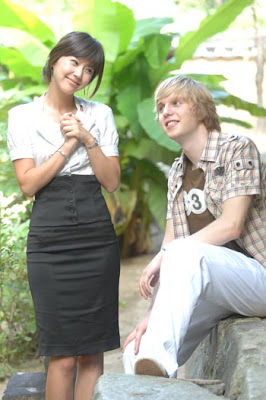 A few days later I saw other images of Korean speaking women - except that this time they were foreigners.

I saw this advertisement in the theatre before watching the Simpsons Movie, so it really stood out, and things that look small in that video were very obvious on the big screen. My friend pointed out that the blond is a Canadian who's appeared on Minyeodeuli Suda (I immediately assumed they were from that show). A Korean comedian on Misuda was at the center of an uproar back in December (though the person most directly affected by this didn't show any anger over it when she was later interviewed). The show has apparently gone through a metomorphosis over the past few months, as discussed over at the Paint Roller blog. A few other ads featuring the women who have appeared on this show can be found here and here.

Anyways, regarding the ad above, there's not much more to say that it's really, really bizarre, especially looking at the Canadian woman. I can't say I've ever met a Canadian woman who acts anything like what we see above, though I have seen Korean women (especially in their teens and twenties) act in a similar manner, though nowhere near as exaggerated as in the ad. It reminds me of a conversation I had the other night discussing to what degree foreigners adopt (or copy, really) Korean mannerisms as they get to know the culture and language, and to what degree they retain their own cultures' mannerisms, such as when they add a slight bow to a handshake, or at the more elaborate end, learn Korean drinking ettiquette, which is quite a bit more complex than, say, Canadian ettiquette, but is necessary to have some knowledge of in order not to offend people. Now most likely, the behavior in this ad is more heavily influenced by its producers than by the fact that these women have acquired some of the mannerisms of Korean women their age, but at the same time, they would have had to draw on some sort of experience (perhaps just by watching TV) to be making the exaggerated facial expressions they did. 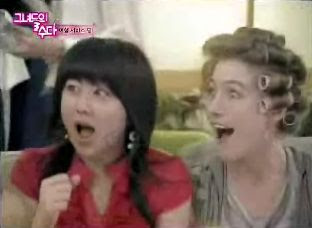 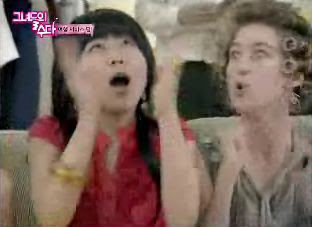 In the end, several questions are raised. I know the Canadian woman is not acting like a Canadian woman normally would, so I'm left assuming they're acting like Korean women; but what kind of Korean women? Or are they supposed to represent how Koreans think foreign women should act when they interact with Korean men (when speaking Korean)? Someone could really have fun writing about the construction of feminity in Korea in part by looking at this ad and looking at the whole Minyeoduli phenomenom. I'm not going to, mind you, but it's worth a few observations. Again, like the photo at the top of this post, where the Korean woman's pose stood out for me due to her standing next to a foreigner, in the ad above the behavior stands out and seems strange because it's being performed by foreign women. One thing that stands out is how childish they seem; at a guess, one might assume they're middle school girls standing outside SBS studios waiting for Superjunior to appear, not women in their twenties hearing about the benefits of using Samsung Card. It goes without saying that it's just an ad and that ads always construct fantasies of one type or another, but it's worth asking just what kind of fantasy they're trying to depict. Now, I rarely watch TV, but from what I've seen it seems Korean TV ads don't have the self-parody or sometimes a slightly subversive edge you find on North American TV (correct me if I'm wrong). A few people I know in marketing have told me ad companies often make one or two ads, and the good, funny ones are often turned down in favor of more 'straight and narrow' ads. The rejected ads do turn up from time to time after being leaked, such as this one (probably not safe for work).

Anyways, back to the kind of fantasy being depicted in the ad, or at least the depiction of these women, who speak and act Korean but are foreign, who seem to be acting like they're ten years younger than they are, and who are going way over the top in their depiction and looking quite silly, especially in the still shots: 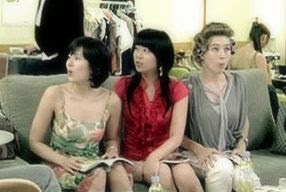 Of course, making people look silly is pretty common; though foreigners are treated to this quite often, they shouldn't go thinking they're they only ones being targeted by any stretch of the imagination (oddly enough this clip caused a bit of a scandal). It's not so much the silliness or frivolousness of the ad that stood out, but once again the subservience, especially once the 'unattractive' middle-aged guy begins talking to the women and the women react by fawning over him Samsung Card. It happens so fast in the ad that I didn't notice what happens at the end until I saw this screenshot : 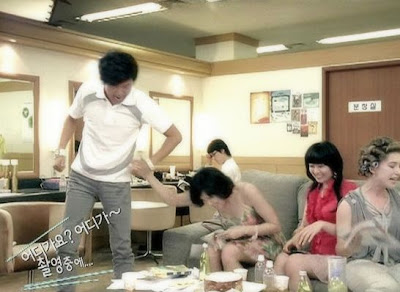 I'll leave it to you to imagine where they might be off to next. Perhaps someone in the marketing department came up with the slogan "Samsung Card: Helps average middle-aged men score with foreign women who act like they're thirteen," but decided to change it.


On a somewhat related note, there are lots of foreign actors doing ads on Japanese TV here. The Arnold Schwarzenegger ones have to be seen to be believed.
Posted by matt at 2:12 AM 6 comments: