Update: Oranckay commented on protest suicide and it's political use by the left and the right, and Antti introduced me to the Chun Tae-il Memorial Foundation website which has lots of photos and even a comic about Chun's life.


The Chosun Ilbo, in an article titled 'Seoul Immortalizes Single Spark that Changed a Nation', says that when Cheonggyecheon is fully restored on October 1st, Cheonggye6-ga, the street which runs north and south between Dongdaemun and Dongdaemun Stadium, will be renamed Chun Tae-il Street. It was on this street, on November 13 1970, in front of the Peace Market (a building full of sweatshops where he toiled as a garment worker), that 22 year-old Chun Tae-il immolated himself in a protest against the labour conditions he and his coworkers were subjected to. Sweatshops like these were densely packed into the markets around Cheongyecheon street: 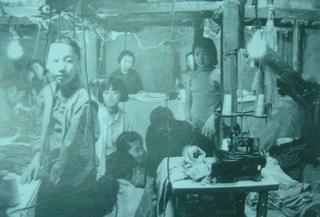 The article has a fairly good account of Chun's life and the year or two that led up to his death. Perhaps worth noting that it was the Kyunghyang Ilbo which, on October 7, 1970, printed a story at the top of it's city section titled "16 Hours of Daily Labour in the Back Room", a story which gave Chun hope that the publicity would force the owner of the Peace Market to make changes. When this failed, and the labour inspectors failed to keep their promises, he decided to burn his copy of the Labour Standards Act; or that's what he told his friends. Feeling that there was no other way to bring attention to their plight, he had decided on a more radical course of action, one portrayed in the 1995 biographical film, A Single Spark: 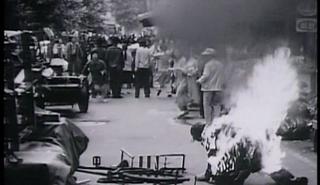 The Chosun article has a photo pointing out where he 'died'. 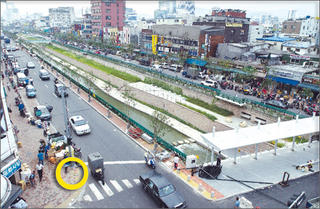 Well, actually, the spot, pointed out by the yellow circle, was where he fell, still covered in flames. He died 8 or 9 hours later after being sent to two hospitals. And 'Do not let my death be in vain' wasn't his last sentence either; he was conscious for several hours after having his entire body burned, and talked with his friends and mother for some time. As he hadn't eaten for two days, his final words were 'I'm hungry'. According to his biography, the reason he was so badly burned was that his body had been in flames for 3 minutes before anyone thought to put the fire out, so shocked were the people who had seen what had happened. It's a shock that has long since worn off, I think. In a time when self-immolation is still a reasonably common form of protest, it's hard to imagine a time when it was unheard of in Korea, when it could shock people so much they wouldn't think to put it out. While some might jump to blame Chun for starting it all in Korea, I think the blame falls more with the followers.

Within 3 days of Chun's death, several Seoul National University School of Law students had met with Chun's mother in order to take part in his funeral, and 400 held a demonstration. Another demonstration on November 20 led to SNU's indefinite closure, and the next day police arrested a student carrying a gasoline can. In short, it took 8 days for someone to attempt to do it again. That same day, Kim Dae-jung spoke out about Chun and months later Kim included Chun's name in his party's platform prior to the 1971 election (after which election Park Chung-hee declared martial law, before creating the new Yushin constitution in 1972). His name constantly appeared in the press, on the lips of politicians, religious leaders, and student activists. The manner of his death, and the fact that it brought the plight of these garment workers to national attention, almost guaranteed that others would use self-immolation as a form of protest, precisely because it had worked. What these other people who died by setting themselves alight didn't realize was that it was the shock of someone doing this for the first time that had worked, that had roused people into action (or more often, just words). Can you remember the name of another person who used the tactic?

And yet, one gets the feeling, reading a comment like "We Christians have come together not so much to grieve Chun Tae-il's death, but to lament over the apathy and hypocrisy of the churches of Korea," that Chun's name was being used by people to advance their own agendas. The fact that Chun was a Christian could be used by churches to help exaggerate their own importance, while of course the media just wanted to sell newspapers. Students had been protesting Park Chung-hee's 'heavy-handedness' and the extension of his rule (by amending the constitution in 1969, which allowed him to run for a third term in 1971), and it seems Chun's death was a great symbol of all that was wrong with Park's developmental dictatorship, which they seized upon within a matter of days.

Perhaps some of this sounds very similar to what happened to the deaths of Shim Hyo-sun and Shin Mi-seon in 2002, (with Park Chung-hee being targeted instead of the US military). Unlike the accident that killed these two girls, Chun's death didn't help a president get elected (or did it? Maybe one of these panels needs to turn its attention to the possible voting fraud in the 1971 election). If this sounds cynical, it's worth noting that these events cause both genuine anger and often see the rise of people who take advantage of this anger to advance their own causes.

Beyond Chun Tae-il and the girls killed in the 2002 accident, there have been several events where an 'unjust' death has changed the path of Korean history. The reaction to the death of Kim Ju-yeol, a high school student in Masan whose corpse was found floating in Masan harbour after a protest (with tear gas shell fragments embedded in his eye), was the final straw that pushed those angry with Syngman Rhee's fraudulent election onto the streets on April 19, 1960. After protesting crowds were fired on, leading to 192 deaths, Rhee was forced to step down (more info here). On June 9, 1987, Yonsei university student Lee Han-yeol was killed by shrapnel from a tear gas cannister which had exploded above him (in a month when 300,000 tear gas cannisters were fired by police). His death (helped perhaps by anger at Roh Tae-woo being given the presidential nomination the next day) helped propel more people into the streets, especially for a funeral procession where 1 million people marched from Yonsei University to city hall, where some forced their way to the roof and lowered the flag to half mast. On June 29th, Roh conceded to opposition demands for direct presidential elections and political reform. The Joongang Ilbo had an excellent article on Lee Han-yeol's death this past June.

While Chun Tae-il didn't bring about political change in the short term, Chun's protest did kick off the post-Korean War labour movement in Korea, even though martial law in October 1971, and the advent of the Yushin constitution forced it underground until 1979 (at which time the YH strike sparked off a series of events that led to Park Chung-hee's assassination). The movement had another burst of activity in 1980 (urged on this time by the Sabuk Strike), but was again held back by the Chun Doo-hwan regime, before finally kicking into gear in 1987.

It's been argued that the union activity after 1987 led to increases in wages that allowed people to be able to afford to buy more things, thus enlarging Korea's internal economy and leading not just to rampant consumerism but also to more and more people buying cars. Chun's immolation will have not only led to having a street named after him by a city that ignored the conditions which caused his suicidal protest (and having this chronicled by the Chosun Ilbo, a newspaper which likely never gave a shit about those same conditions when Chun was alive); it may have contributed to the traffic jams that will be found on this street every day.

(Most of the information here came from "A Single Spark: The Biography of Chun Tae-il", which is published by the Korea Democracy Foundation).
Posted by matt at 3:51 AM

This is a homemade trackback:
http://oranckay.net/blog/?p=1092

Thanks for a wonderful posting.

Chun Tae-il Memorial Foundation has some contemporary newspaper documents, of which the most interesting is an extensive report by Monthly Donga (March, 1971), "Pyeonghwa Market, afterwards". It mentions a later attempt at group-self-immolation on December 1970, when the police had started cracking down on the effects of Chun's death. Twelve workers poured gasoline on themselves, and could first drive back the police by threatening self-immolation, but soon after that they were taken by surprise and overpowered by the authorities.

Actually, it was the English version of Chun's biography I used (I found mine at Seoul Selection). Having this biography, I'd never thought to look for information on the net, so thanks for those links and the summary, antti.

When he was being burned, onlookers wanted to save him, but there were some characters who shoo away these people. There are some bad characters like that. Politicians who use everything to advance their cause and themselves. They are running the country now.

All those who worked silently and continuously for the better Korea are now being branded as "American sympathizers". Only those who engaged in destructive activities are being claimed as heroes and freedom fighters. Is Korea any better than some lawless African countries?