I've meant to write about this for awhile but it's slipped my mind. It was a month and a half ago that I was waiting for the subway and saw two pages of the Chosun Ilbo someone had left on the bench; upon flipping through them, I found one of the coolest articles I'd come across in awhile, titled "Do you know 'A Tomorrow Without Tuberculosis' and 'Lee Soo-man and 365 Days'?" It's about Japanese guitarist Yohei Hasegawa, who is currently the guitarist in the Kim Chang-wan Band, and who has been living in Korea since 1997. He previously played with Sato Yukie in the band Gopjang Jeonggol, which plays covers of classic Korean rock songs (I've seen Sato Yukie play solo twice, and he's well worth seeing). 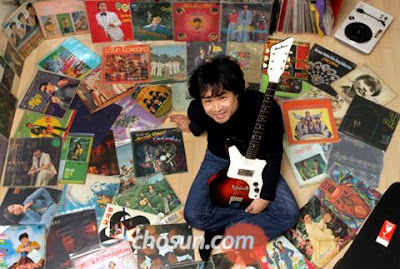 The article focuses on Hasegawa's record collection, and has him introducing some of his favorite albums such as "Lee Soo-man and 365 days," a hard rock album by Lee Soo-man, founder of SM Entertainment (who was part of the folk duo April & May in the early 1970s). Of the 3000 old LPs in his collection, 2000 of them are of Korean music, and range from traditional music to trot to his clear favourite - Korean rock music from the 1960s and 1970s, which he calls 'world class' rock music. Most of the albums he found cheaply, but he has paid 2 million won for a rare album before.

Reporter Han Hyun-woo visited Hasegawa's officetel in Sinchon to check out his record collection, which includes such things as "A Tomorrow Without Tuberculosis", which was recorded by a Peace Corps volunteer in 1969 in cooperation with the Korea Tuberculosis Association and included the title song, 'Jindo Arirang', 'Obongsan Taryeong (traditional ballad)', and 11 other songs.

Curious about this, I did some digging and found this archived blog post about it, which includes the lyrics to the song "A Tomorrow Without Tuberculosis," as well as a photo of the record: 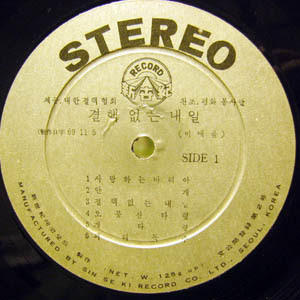 The lyrics include things like "The strength of a country is it's people's health," and urge people to get tested for TB. What I found interesting was what was at the bottom of the page: 작사작곡: 개리.래크타. "Words and Music by Gary Rector," a long-term expat (and Korean citizen) who first came to Korea with the Peace Corps in 1967, and who I remember as the writer of the column 'Hungbo's Gourd' in the Korea Herald about ten yours ago. Oh, and the other thing at the bottom of that blog post? A link to an mp3 of the song. I'm definitely going to have to check out more of that blog.

Back to the article, Hasegawa also has rare albums found along the old markets that used to line Cheonggyecheon, including a 1975 album titled 'Salute the Flag!', and a 1968 LP titled "Citizen's Education Charter," which has the announcement of the charter and Park Chung-hee's statement on it.

What he likes most is rock music from the 1960s and 70s, so when he first came to Korea in 1995 (at the time he was working in a record store in Tokyo) he followed the rumors he heard to the underground market at Hwanghak-dong, where he bought so many records for 1000~2000 won he could barely carry them all.

After that trip he often visited Korea, and settled here in 1997, (taking the Korean name 'Kim Yang-pyeong,' with 'Kim' coming from 'brother' Kim Chang-wan (of Sanullim)'s suggestion).

Hasegawa, who has been influenced by German bands Neu! and Can as well as American band Television, said, "During the golden age of rock in the 1960s and 1970s, Korea made world class rock music... For political reasons [Koreans] didn't get to hear a lot of music [being made at that time] which actually stimulated their imaginations."

"In Korea there seems to be a lack of respect for musicians. Especially during broadcasts, if musicians handle the sound equipment they're scolded with 'What do you know about it, why are you touching it?' It's something you can't imagine happening in Japan." He has really enjoyed Korean audiences, saying that "Koreans' passion seems similar to South Americans. They know how to enjoy the moment. When we play rock festivals people are already crowd surfing during our sound check."

Hasegawa plans to continue collecting Korean LPs. "You can buy Led Zeppelin or Rolling Stones albums anywhere. I think I'll continue to collect albums that cannot be found outside of Korea."

I have to wonder if that's the only time Neu! or Can (or any Krautrock band besides Kraftwerk) have been mentioned in a newspaper article in Korean. There's a link to Shin Jung-hyun and the Men's 22 minute version of 거짓말이야 (Lies) here, which is amazing, though there are parts similar enough to Neu! and Can to make me wonder if Shin might have heard them (not impossible, especially considering the fact that U.S. forces served in both West Germany and Korea (and the wackiest pre-Krautrock band in Germany was the Monks, a band made up of former GIs)). On the other hand, it might just be a coincidence, the result of, as Hasegawa put it, imaginations stimulated by isolation.

Shin Jung-hyun and the Yeopjeons first (now rare) 1974 album, due to the inclusion of Mi-in and its famous guitar riff.

Of 'Jang Hyun and The Men' (1972) he notes its importance for having the original version of 'Areumdaun Gangsan,' and using 'thick fog' and 'rising smoke' to describe it, says, "The entire album including the jacket is very dark. It's an album which expresses well what it was like to live in Korea at that time." That album, which I downloaded here (and can be listened to here, and was written about the other day here), has certainly grown on me a lot after I first mentioned it here. There are not a lot of bands using an oboe as a main instrument, so it has a pretty unique sound.

When you hear this album, you wonder what the use of applied music and composition theory is. This album really is punk. It seems it was made saying, "Whatever, just do it," and was made without lyrics or composition, like a sculpture or invention. In terms of musical personality/individuality, it's the world's best record.

High praise. As much as I like that album, I prefer their second LP (1978), which runs the gamut from noise to folk to rock to psychedelia even while creating guitar sounds you'd expect from early Killing Joke - who wouldn't release their first album for another year.

I plan to delve more into the rock music scene of the late 1960s and early 1970s in future posts, especially in its relation to the banning of marijuana and the crackdowns both faced in the mid 1970s.
Posted by matt at 9:39 AM

Interesting stuff!
I love the fact that we have a Japanese dude who loves and is an authority on Korean rock.
(One of those funny ironies I love: Non-Koreans teaching Koreans (and other non-Koreans) about Korea.)

This guy would be cool to hang out and listen to records with.

Thanks for posting this. I have the Jang Hyun and the Men album, but it is very scratched. I picked it up in Seoul in 1972 as I left Korea after growing up there. Thanks for the link to the mp3 files.

This is a Japanese characteristic, they find a hobby to latch onto and go for it until the end. One J-friend described it to me like Ju-Do and all the "Do" arts, "the way." When I lived in Japan, I had tons of friends like that, and they were into all kinds of things They were fun to talk to.... I have one too.

Im sad when I think about the K's and their lack of interests, rather uninteresting to talk to, and I dont feel like I have to educate others. But, K is what it is.

As far as foreigners educating Ks about their culture, read up on Sam Ul No Ri. Theres others, too. sigh...