Barking Up the Wrong Tree

Part 10: Barking Up the Wrong Tree 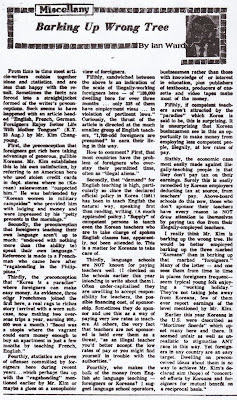 From time to time most article writers cobble together ideas and statistics, and are less than happy with the result. Sometimes the facts are forced into a straightjacket formed of the writer’s preconceptions. Such seems to have happened with an article headed “English, French, German. Foreigners Enjoy Better Life With Mother Tongues” (K.T. 23 Aug.) by Mr. Kim Chang-young.

First, the preconception that foreigners get rich here taking advantage of generous, gullible Koreans. Mr. Kim establishes this to his owners satisfaction, by referring to an American here who used stolen credit cards in dept. stores where no (Korean) saleswoman “suspected him.” He was befriended by “Korean women in military campsides” who provided him with lodging and money and were impressed by his “petty presents in the mornings.”

Secondly, the preconception that foreigners teaching their own language aren’t up to much: “endowed with nothing more than (the ability to) speak their own language.” Reference is made to a Frenchman who came here after “vagabonding in the Philippines.”

Thirdly, the preconception that “Korea is a paradise” where foreigners can make easy money. As evidence, three other Frenchmen joined the first here, a real rags to riches story (arrival with a worn suitcase, now making two overseas trips a year, earning 900,000 won a month). “Seoul was a utopia where the vagrant could earn money enough to buy an apartment in just a few months by teaching French, English.”

Fourthly, statistics are given of offenses committed by foreigners here during recent years… which perhaps ties up with the “vagabonding” mentioned earlier by Mr. Kim or maybe a gloss on a xenophobic view of foreigners.

Fifthly, sandwiched between the above is an indication of the scale of illegally-working foreigners here – of “150,000 dwelling here for over three months … only 338 of them have employment visas … in violation of pertinent laws.” Curiously, the thrust of the article is directed at the much smaller group of English teachers, “1,700-odd foreigners are presumed” to earn their living this way.

How to comment? First, that most countries have the problem of foreigners who overstay their permitted time, often as “illegal aliens.”

Secondly, that “demand” for English teaching is high, particularly so since the declared official policy in Korea (1981) has been to teach English the natural way, speaking first then reading, writing. (A much applauded policy.) “Supply” of competent persons to teach even the Korean teachers who are to take charge of spoken English classes has, apparently, not been attended to. This is a matter for Koreans to take care of.

Thirdly, language schools are NOT known for paying teachers well. (I checked on the schools earlier this year intending to write about them). Often under-capitalized they are unwilling to accept responsibility for teachers, the possible financing cost, of sponsorship. Sometimes they do sponsor and use this as a way of paying very low rates to teachers. At others, the very fact that teachers are not sponsored is held over them as a threat, “as an illegal teacher you’d better accept the low rates of pay or might find yourself in trouble with the authorities.”

Fourthly, who makes the bulk of the money from English etc language teaching – foreigners or Koreans? I suggest language school operators, businessmen rather than those with knowledge of or interest in education, plus publishers of textbooks, producers of cassette and video tapes make most of the money.

Fifthly, if competent teachers aren’t attracted by the “paradise” which Korea is said to be, this is surprising. It is unsurprising that Korean businessmen see in this an opportunity to make money from employing less competent people, illegally, at low rates of pay.

Sixthly, the economic case most easily made against illegally teaching people is that they don’t pay tax on their earnings. Surely this is easily remedied by Korean employers deducting tax at source, from teachers’ pay. Above-board schools do this now, those who don’t sponsor their teachers have every reason to NOT draw attention to themselves by paying tax due from the illegally-employed teachers.

I really think Mr.Kim is barking up the wrong tree. He would be better employed barking up the tree marked “Koreans” than in barking up that marked “foreigners.” Many of the latter – and one sees them from time to time in places foreigners frequent – seem typical young folk enjoying a “working holiday.” They’re not taking jobs away from Koreans, few of them ever report earnings of the level mentioned by Mr. Kim.

Earlier this year Koreans in the U.S. were described as “Mortimer Snerds” which upset many here and there. It seemed unfair as well as unrealistic to stigmatize ANY race in this way. Yet foreigners in any country are an easy target. Dwelling on preconceived ideas about them is no way to achieve Mr. Kim’s declared aim (hope) of “concerted efforts by Koreans and foreigners for mutual benefit on a reciprocal basis.”

That's an interesting look at hagwons back in the day (my, how things have changed), and is also likely the only published response by a foreigner to the portrayal of foreign teachers as vagabond frauds who are treated too well by Koreans which appeared in the Korean media in response to the Le Monde article of two weeks earlier.

For those who are curious about the 'Mortimer Snerds' comment, it appeared in the June 13, 1983 Time Magazine article "Los Angeles: The New Ellis Island," which looked at the different ethnic groups in Los Angeles. About Asians, it said,

The "ABCs" (American-born Chinese) tend to be contemptuous of the "FOBs" ("fresh off the boat"). L.A. Filipinos have their own snickering Tagalog-language acronym—"TNTs"—for their new and often illegal arrivals. Nisei, or U.S.-born Japanese, are embarrassed by Japanese nationals who speak no English; newly arrived Japanese, in turn, are wary of L.A.'s native sansei (third generation) and yonsei (fourth). But all the Japanese seem to agree that they are superior to other Asians. And everybody picks on the Koreans. Says U.C.L.A. Sociologist Harry Kitona: "They regard the Koreans as the Mortimer Snerds of America. They cannot learn the language, their food smells and they cannot express themselves." In a city with half a dozen major "Oriental" communities, national distinctions seem magnified, perhaps because these uneasy ethnic cousins have been thrown together as never before.

As described here, Mortimer Snerd was the secondary dummy of ventriloquist Edgar Bergen, created in 1938:

The character was an amiable hick, with a slow drawl reminiscent of the Disney character Goofy, and a streak of innocence and unique logic [...] The dummy reflected this, with buck-teeth, elongated nose, and more mundane "rube in the city" costuming.

South Korean immigrants also tend to be middle class, or working slavishly to get there. Their numbers have gone up 16-fold since 1970, with virtually all of the newcomers settling in a 2-sq.-mi. swath along jumbled Olympic Boulevard. They seem eager to become full-fledged American bourgeois, holding golf tournaments and staging beauty contests. According to L.A. Demographer Eui-Young Eu of California State University, 40% of the area's documented Koreans own their homes. Most are fervent Protestants. Koreatown has some 400 churches. Ironically, younger Koreans are more likely to commit crimes than any other Asian nationality.

That last sentence is rather interesting. The article got several responses, such as the two below:

As an American citizen, but first and last a Korean, I felt your article gave an extremely negative view of the Korean people. You quote a sociologist as saying that the Japanese regard Koreans as "Mortimer Snerds." Well, these assumed "superior Asians" have much to learn before making ignorant, prejudicial generalizations about Koreans.

The Korean American Coalition feels that your article accentuated the negative aspects of immigration while ignoring numerous positive contributions made by recent immigrants. Koreans have already improved Los Angeles by transforming a previously deteriorating neighborhood into a vibrant area called Koreatown. Most of the Korean immigrants are highly educated and skilled and are ready and willing to make contributions to this country. In fact, more than 60% of the Koreans who came here in the past ten years have at least four years of college.

On the bright side, at least there weren't articles with titles like "In America, there are a lot of Korean criminals," or with lines like "deviant and criminal acts by Korean immigrants have become common."
Posted by matt at 11:34 AM

I'm sorry I missed your meeting with Mike last week.

Just wanted to say this series is absolutely fascinating!