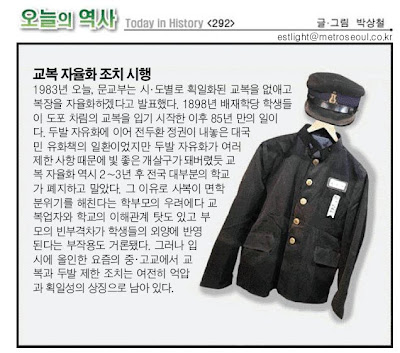 To sum up, on this day in 1983 the Culture and Education Ministry announced that standardized school uniforms were to be done away with and students' dress was to be liberalized. (Uniforms originated with the Baejae Hakdang in 1898). Within two or three years, the measure was done away with due to the interests of parents worried that regular clothes harmed the academic atmosphere, school uniform sellers, and the belief that regular clothes reflected the economic gap between students' families.

Maybe it's just me, but this picture in Metro last week which accompanied an article about the ban on corporal punishment in schools just seemed a bit creepy, especially in the way the girl is superimposed over the date and background of the paper, as if she must take precedence. 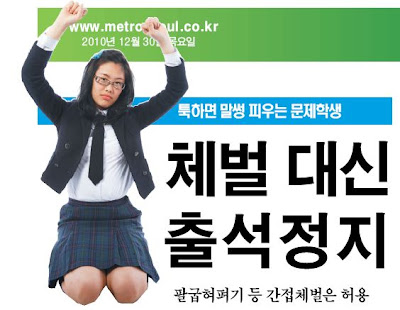 It reads "Down on your knees, you naughty, naughty girl Suspension instead of corporal punishment for students who easily cause trouble; Permission for indirect punishment such as push ups." Perhaps I'm projecting a lot of western cultural baggage when I think that male teachers forcing teenage girls in skirts to kneel before them (and highlighting it in a newspaper) is creepy, but considering the prevalence of wonjo gyoje and the fact that consensual sexual relationships between male teachers and female students is not seen as uncommon (according to Korean high school teacher friends of mine) and is not even illegal, it may not be just me.

While I'm at it, the paper's front page today had this report:

I'm hoping to get pregnant this year, and one of the first things my (Korean) husband said to me when he got home last night was that it costs 260,000,000 won to raise a child in Korea (with a look of horror on his face). I guess he heard it on the news on the way home. Thanks for the additional 140 million figure. I'll make sure to calm his fears by assuring him this future (Canadian) mum won't be sending her kids to hogwan every night.