Bits and pieces about English teachers

Demand for English learning is growing and the number of native speaking instructors working in Korea increases every year, but problems with their qualifications are also never ending.

Recently, however, WOW EduNet (www.wowedunet.com) has suggested alternatives to the problems of native speaking teachers.

From there it goes on to act as an advertisement for the company. Interesting idea, though: Slag off foreign teachers to advertise your own company (in a "news" article). The company uses teachers in the US via video chatting. For those hagwon teachers who are annoyed at having to write student reports every month, the company promises parents a report after every class.

In other news, the Guardian recently mentioned HIV testing of foreign teachers in Korea in its education section.

I also found this interesting: 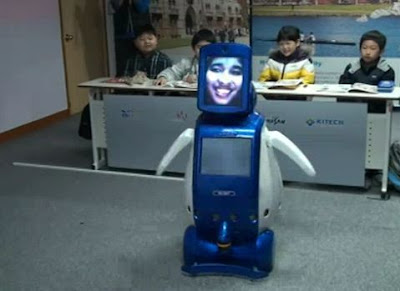 Taken from the video which Brian posted here, it seems perhaps that the robot has the face of the teacher controlling it in the Philippines. However, I've been told that the screens will not show the speakers face as a video chat would, and only feature one of two possible faces.
Posted by matt at 9:19 PM

Robots! They're going to take our jobs!

Yes, the cost is so high to have a native English speaker...

Will these robots be cheaper than that and offer the same level of education?

I still think the best way to address the "teacher" issue, is to increase the bar for teaching requirements.

I agree with the QiRanger about raising the bar for teachers, but that will mean importing far fewer foreign EFL teachers and paying the ones that are invited much higher salaries.

Although I couldn't read the original article, the excerpt quoted in this post doesn't seem to 'slag off' foreign teachers. Perhaps the word 'problematic' was translated from a Korean word that is unflattering, but the translated version here seems quite innocuous.

Of course, a big (apparent) problem with the article is that it's one-sided. It seems to paint Hagwon as victims of circumstance, and ignores the problems caused by government/immigration policy and unscrupulous practices rife in Hagwon throughout the country.