Just say no to military cooperation with Japan

I think it's good to see that certain ties between South Korea and Japan may get closer, but not everyone agrees: 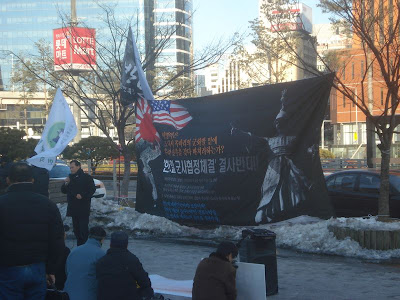 "Vehemently oppose the signing of a
military pact between Korea and Japan"
This small protest was held in front of Seoul Station last week. 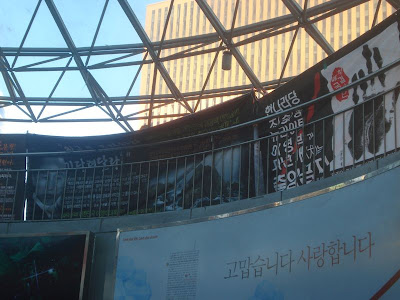 Even beyond the mentions above of Lee Myung-bak, 'new right', and the Grand National Party (which point to the protest's leftist origins), the hand print of Ahn Jung-geun, who assassinated Ito Hirobumi a century ago, should make the stance of those who made the banners pretty clear.
Posted by matt at 2:18 PM

Funny to think what Korea would do if they didn't have the Japanese to hate and blame for everything f'd up in their own country.

Koreans act as if they were the only ones hurt by the Japanese
in the early/mid portion of the last century.

(And judging from all the Japanese restaurants, izakayas, retail stores, and coffee shops in Gangnam, I think--unconsciously--folks in these parts may be learning to like Japan a bit more.)