Anti English Spectrum's leader M2 (I wonder if the took the name from the Hongdae club?) was lazing around at home on new years day (due to a 'cold') when he was struck by a brilliant idea. What better way to get fellow citizens familiar with the name Citizens' Group for Upright English Education than to make a song request on the radio using the groups name?

He chose a CBS radio show titled FM Pops with DJ Han Dong-jun hoping that its listeners (people in their 30s and 40s who have school-aged children) would hear the group's name. The DJ introduced his song choice by saying, "___ is sending this out to the Citizens' Group for Upright English Education" and, "The Citizens' Group for Upright English Education is a very good group," which really made M2’s day. His song request is underlined below: 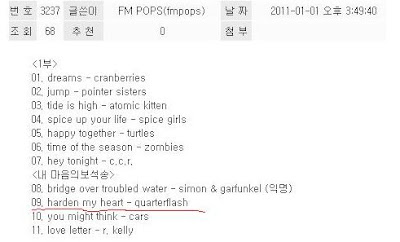 You can listen to it here. Somehow I doubt I'll be running into him at any indie shows in Hongdae anytime soon. Too bad he didn't request the R. Kelly song.

As for his great idea, I think it goes to show that a pretty good comedy could be written about these guys, with a dim-witted new recruit being shown the ropes by one of the veterans, arguing over which garbage bag belongs to the English teacher, etc. Seth Rogen to write and star as M2.
Posted by matt at 9:20 AM

Wouldn’t you just love to be a fly on the walls at one of their meetings? It must be pure comedy. And hey – I’d watch that show – even if they couldn’t get Seth Rogen.

You and I clearly have different definitions of "genius". Even in jest.