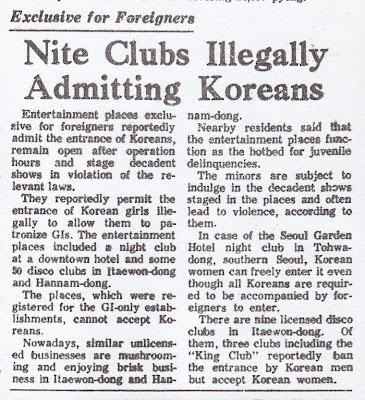 Are they certain those "50 disco clubs in Itaewon" are disco clubs? Does anyone know how long those 'GI-only clubs' existed for? And who knew the King Club was around for that long?

I also like that after seeing "decadent shows" staged in the clubs, juveniles become violent, as if exposure to such a foreign place would taint them. Tomorrow I'll post a closer look at such clubs in the mid 1980s.
Posted by matt at 1:27 PM

Once again, we see this idea of Koreans as "pure" by nature--innocent sheep being preyed upon by foreign wolves.

Funny that a lot of those Korean ladies were, ummm . . . ladies of the night--esp. in Itaewon.
Geez, I remember even ten years ago you had to be really careful in Itaewon clubs b/c you never knew if the young lady you were dancing with/talking to was a good girl or a working girl (usually the latter).

Then again, I've heard the typical purity line extended to prostitution itself in Korea--blaming it ALL on the Japanese.

Foreigner only sounds good to me.

King Club has been around forever. It was disgusting then, and worse now.

Interestingly, foreigner-only was a Korean gov't scheme. Kinda like Jim Crow, but Korean women weren't barred from the clubs because they were only 2/3rds human. The scheme was to bring in more hard currency - mainly from US military back then, who could drink at lower cost on-post clubs. Those foreigner-only clubs were charged lower taxes, or may have been exempt. So cheap(er) booze + Korean women = Joe in the ville.

King's Club ? Now I remember, yeah.Had forgotten that one. It was full of GI's (1985) and the last place we went to in search of local girls whenever our efforts at Sportsman's Club or elsewhere were unsuccessful. You had to be either completely drunk or extremely lucky to score at that time of night , the wee hours of the morning. Don't tell me that place is still in business ?!

Sportmans club 1987. Was there. The pashu club was also around. Such a long time but still in my memories