The persistence of Time

Or, 'Through a monitor darkly.' 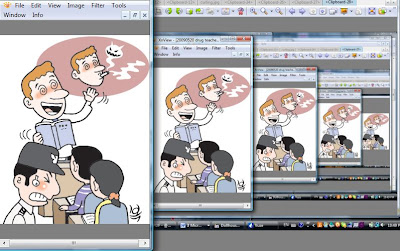 Leads to discrimination, ineffective...Petitions to the NHRCK and the constitutional court are underway.

The American current affairs weekly Time harshly criticized mandatory HIV/AIDS testing for foreign instructors in Korea in an online article on the 24th.

The magazine said that in recent years xenophobia has grown serious in Korea, in particular towards foreign English instructors in a return to the days of King Gojong at the end of the Joseon dynasty.

The article looked at Lee Eun-ung, spokesperson of Anti-English Spectrum (currently the Citizen's group for upright English education), in particular, introducing in detail his negative bias towards Itaewon culture and foreigners through quotations, and after this took into consideration USFK's instigation of the sex industry in Korea, noting however that they are not the only consumers of prostitution.

It also argues that anti-foreign feeling is very serious in Korea, citing examples such as how the Korean women who appeared in photos of a foreign teacher party in Hongdae in 2005 were criticized and called 'yanggongju.'

Such feeling crystallized into policy and since 2007 a mandatory HIV testing system for foreign English instructors has been enforced.

The opportunity to establish this system came as Canadian English teacher Christopher Paul Neil, who had passed through Korea, was arrested for molestation crimes against children in places like Cambodia, Vietnam, and Thailand. Parents of schoolchildren became more worried about the qualifications of native speaking English teachers and authorities made criminal background checks together with HIV checks mandatory for English teachers.

However foreign instructors and human rights groups are in opposition to this system.

It's not just a matter of discrimination against foreigners, it spreads the false prejudice that AIDS is only a 'foreign problem' and as a side effect gives rise to new stigmatization against AIDS patients.

Former English teacher Andrea Vandom said, "Simply because I am not Korean I was pinpointed as a spreader of sexually transmitted diseases," and filed an appeal to the constitutional court.

Benjamin Wagner, a professor at Kyunghee University School of Law, argued that, "You simply cannot discriminate on the basis of race." Wagner and the Association of Teachers of English in Korea each filed petitions with the NHRCK demanding the abolition of the system.

In November UN Secretary General Ban Ki-moon urged that the the system be abolished.

Previously the same month, the HIV test for people applying to enter the country on migrant worker or entertainment visas was abolished.

However, considering the ignorance of authorities, the magazine asserted that the HIV testing system for English teachers will not abolished any time soon, and will require effort to do so.

The Time article it references is this one, titled "South Korea: Should Foreign Teachers Be Tested for HIV?" Asia Gyeongje's translation is fair enough, though Andrea Vandom's quote is slightly different from the original:

"Simply because I am not Korean I was pinpointed as a spreader of sexually transmitted diseases" vs "I was being pinpointed a s [sic] disease carrier simply because I am not of Korean blood." Asia Gyeongje left out 'blood' and added 'sexually transmitted' to disease, but may have been truer in some ways to the source, since Time took Vandom's statement out of context. As she was originally quoted last year in Ohmynews,

"Given how long I was in the country already, it was illogical to require me to submit these documents. And I was being pinpointed as disease carrier simply because I am not of Korean blood. Suddenly they saw me as morally suspect and a threat to the community because I was a foreigner."

The Time article inserts her quote after a very incorrect statement:

Three years later, the law persists, though ethnic Koreans are exempted, regardless of where they are born or raised. Says Andrea Vandom, a former teacher who is petitioning a constitutional court over the tests: "I was being pinpointed a s disease carrier simply because I am not of Korean blood."

It's clear from the original that Vandom was not referring to ethnic Koreans from other countries, who are most certainly not "exempted, regardless of where they are born or raised." Not every ethnic Korean can get an F-4 visa, and those who do have them still must get tested for public school jobs.

The Asia Gyeongje article also states that "foreign instructors and human rights groups are in opposition to this system," and coming after a sentence mentioning that foreign teachers have to undergo "criminal background checks together with HIV checks," a reader might assume that there is opposition to the criminal background checks, which neither ATEK, Vandom, or Wagner have ever opposed.

Other than that, the summary by Asia Gyeongje is serviceable, considering the source material. The Time article begins with this:

King Gojong, Korea's last monarch, didn't think much of foreigners. "Uneducated louts," he called them, driven by "lechery and sensuality." But that was 1882, when American missionaries were knocking at his country's door, and Gojong could do little to stop their evangelical advance. The kingdom, he realized, would have to cope with the outsiders. Learn from them, he told his people, but beware their lustful ways.

Actually, the full quotation from King Gojong's 1882 decree, in which he tried to assuage the fears of those who feared Korea would be tainted by foreign religions (from this essay, which I previously quoted from here):

“But as regards entering into treaty relations, of course we shall enter into them, and as regards prohibiting the foreign religion, of course we can prohibit it, and in establishing treaties of amity and commerce, we shall do so in accordance with the principles of international law. According to the rules of propriety, it cannot be permitted that religion shall be promulgated in the interior; besides, how can you . . . suddenly abandon the true and embrace the false and bad? Supposing, for instance, there were to be some stupid fellow, some uneducated lout, secretly attempting to diffuse his teachings [in our country]; then we have the law of our state, by which all such shall be exterminated and destroyed without mercy; what reason, then is there for sorrow on account of our (alleged) inability to deal with such abuses? Moreover, when [these malcontents] see even so little adoption of foreign methods in the direction of mechanism and machinery, they immediately regard that as contamination with foreign heresies. This, indeed, is the ne plus ultra of obtuseness! If the [foreign] doctrine is to be regarded as a doctrine of lechery and sensuality, then it can be kept at a distance; if foreign mechanism is advantageous, then we can reap advantage from it and use it to increase our wealth. . . . Let us repel their doctrines, but learn to use or imitate their machinery; both these courses of policy can be carried out, and thus no outrage will be done to propriety.”

Ben Wagner (who found this quote in the first place) helpfully supplies the original Korean version here. Both sentences quoted from in the article are conditional: "Supposing, for instance, there were to be some stupid fellow, some uneducated lout..." and "If the [foreign] doctrine is to be regarded as a doctrine of lechery and sensuality…" The Time article unfairly reduces this to "King Gojong, Korea's last monarch, didn’t think much of foreigners. "Uneducated louts," he called them, driven by "lechery and sensuality."
The article also includes this:

This summer, a Korean newspaper, the New Daily, ran an exposé on Itaewon, a Seoul nightclub district popular with teachers and tourists. The headline called the area a "loser's paradise" where Korean women are "ruined." "Among foreigners in Itaewon clubs, you'll see that there are almost no decent ones," said the story's lone source, Lee Eun-ung, a prominent anti-teacher campaigner.

That sounds familiar. Unfortunately, the writer didn't read the update a few days later noting that the 'Lee' in the article wasn't Lee Eun-ung after all. So, so far we have two quotes taken out of context, an incorrect statement about ethnic Koreans being exempt from tests and Lee Eun-ung being responsible for the above statements (seeing as it's been translated for a week now, I'm surprised there's no comment about it at AES).

The paragraph about the cyber harassment the women in the 2005 Hongdae party photos also sounds familiar.

Though he was never linked to sex crimes in Korea and was not known to carry HIV, his arrest sparked panic among Korean parents, who, understandably, worried about screening criteria for teachers.

Though he was never linked to sex crimes in Korea and was not known to carry HIV, [media reports about] his arrest [which talked about the "endless problems with foreign teachers'] sparked panic among Korean parents, who, understandably, worried about screening criteria for teachers.

At any rate, while it's nice to see attention brought to the issue by a major American weekly, and nice to know that my work is being read (if not credited), it's hard to get excited when Time gets things just as wrong and is just as sensationalist as the Korean media coverage I regularly decry here.

Not that I haven't had issues with Time's coverage of Korea before - and that's without its idiotic cheerleading for English teaching robots.
Posted by matt at 10:10 AM

you've got a bunch of unreadable black text in there, matt.

Thanks for pointing that out... don't know what happened there... just a lot of span span span div div div crap in the code suddenly.

I wouldn't worry about anything printed in Time. Nobody whose opinion matters actually reads that magazine

I don't necessarily disagree, but this is a problematic statement for this context.

By what standard are F-4 ineligibles to be considered ethnic Koreans? Not by the Ministry of Justice's standard, and their standard is the one that is relevant here since they are the ones implementing the AIDS tests.