I managed to track down some more articles about foreign teachers from August 1984 in the Korea Times. Thanks to Robert Neff for suggesting the National Assembly Library as the place to find the Korea Times on microfilm. 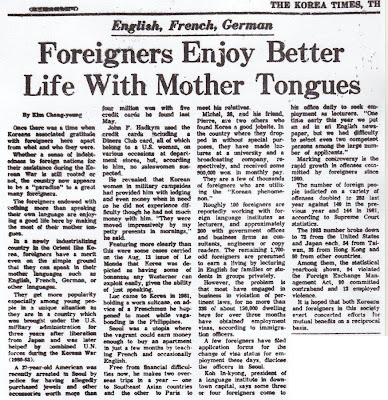 Once there was a time when Koreans associated gratitude with foreigners here apart from what and who they were.

Whether a sense of indebtedness to foreign nations for their assistance during the Korean War is still rooted or not, the country now appears to be a “paradise” to a great many foreigners.

The foreigners endowed with nothing more than speaking their own language are enjoying a good life here by making the most of their mother tongues.

In a newly industrializing country in the Orient like Korea, foreigners have a merit even on the simple ground that they can speak their mother languages such as English, French, German, or other languages.

They get more popularity even among young people in a unique situation as they are in a country which was brought under U.S. military administration for three years after liberation from Japan and was later helped by combined U.N. forces during the Korean War (1950-53).

A 37-year-old American was recently arrested in Seoul by police for having allegedly purchased jewels and other accessories worth more than four million won with five credit cards he found last May.

John F. Hadkym used the credit cards including a Diner’s Club card, all of which belong to a U.S. woman, on various occasions at department stores, but, according to him, no saleswomen suspected him.

He revealed that Korean women in military campsides had provided him with lodging and even money when in need so he did not experience difficulty though he had not much money with him. “They were moved impressively by my petty presents in mornings,” he said.

Featuring more clearly than this were some cases carried on the Aug. 13 issue of Le Monde that Korea was depicted as having some of bonanzas any westerner can exploit easily, given the ability of just speaking.

Luc came to Korea in 1981, holding a worn suitcase, on advice of a Frenchman he happened to meet while vagabonding in the Philippines.

Seoul was a utopia where the vagrant could earn money enough to buy an apartment in just a few months by teaching French and occasionally English.

Free from financial difficulties now, he makes two overseas trips in a year – one to Southeast Asian countries and the other to Paris to meet his relatives.

Michael, 28, and his friend, Pierre, are two others who found Korea a good jobsite. In the country where they dropped in without special purposes, they have made lectures at a university and a broadcasting company, respectively, and received some 900,000 won in monthly pay.

They are a few of thousands of foreigners who are utilizing the “Korean phenomenon.”

Roughly 100 foreigners are reportedly working with foreign language institutes as lecturers, and approximately 200 with government offices and business firms as consultants, engineers, or copy readers. The remaining 1,700-odd foreigners are presumed to earn a living by lecturing in English for families or students in groups privately.

However the problem is that most have engaged in business in violation of pertinent laws, for no more than 338 of about 150,000 dwelling here for over 3 months have obtained employment visas, according to immigration officers.

A few foreigners have filed application forms for the change of visa status for employment these days, disclose the officers in Seoul.

Koh In-Kyong, president of a language institute in downtown capital, says some three or four foreigners come to his office daily to seek employment as lecturers. “One time early this year we put an ad in an English newspaper but we had difficulty to select even two competent persons among the large number of applicants.”

Marking controversy is the rapid growth in offenses committed by foreigners since 1980.

The number of foreign people indicted on a variety of offenses doubled to 283 last year against 149 (140?) in the previous year and 144 in 1981, according to Supreme Court statistics.

The 1983 number broke down to 72 from the United States and Japan each, 54 from Taiwan, 35 from Hong Kong and 90 from other countries.

It is hoped that both Koreans and foreigners in this society exert concerted efforts for mutual benefits on a reciprocal basis.

I think that article might be the best of the ones that had come so far, going beyond its influences (distorted takes on the original Le Monde article, this Joongang Ilbo article on 'fraud teachers,' and this Donga Ilbo article which mentioned the American arrested in June for credit card fraud) to even include the now-familiar refrain "foreign crime continues to rise." I also appreciated the use of 'vagrant' instead of 'vagabond' as a translation of 뜨내기. There are lots of interesting figures there (200 foreigners working for Korean companies and 100 hagwon teachers), and one wonders to what degree this media response to an article in Le Monde was just taking out upon the easiest (or most convenient) foreign target a negative reaction to 'so many' foreigners coming to Korea in the wake of its nascent economic development.

More interesting than this article is the response it garnered in a letter to the editor a few days later. I'll save that for tomorrow.
Posted by matt at 2:27 PM

Kudos on the research. Amazing that these vagabond English teacher stories have been going on for at least 2 1/2 decades - long before the English Spectrum scandal.

I know of a couple of 80's movies that cover this theme.

Between the Knees starred the infamous Lee Bo Hee. A foreign music teacher molests a young girl, an event that triggers her "abnormal" sexual tendencies. http://www.kmdb.or.kr/eng/md_basic.asp?nation=K&p_dataid=03821&searchText=between%20the%20knees

Queen Bee, the story of how a Korean woman is ruined by an English teacher.
http://www.kmdb.or.kr/eng/md_basic.asp?nation=K&p_dataid=03922&searchText=Queen%20Bee

If memory serves me right the screenplay is loosely based on the investigative reports by a female Korean reporter. She went under cover, took up w/ some ETs, observed the goings on, and then published a series of reports.

There were several other exposes of ETs in the press during those years - their coloured underwear really titillated the Korean public.

The crime stat is a intriguing one:
"Among them, the statistical yearbook shows, 94 violated the Foreign Exchange Management Act, 90 committed contraband and 12 employed violence."

The foreign exchange management violations were likely the smuggling of gold into the country and US dollars out.

The second most prevalent crime was contraband, the smuggling of non-money items - think Sony Walkmen, Hasselblad cameras, Scotch, and bananas.

In those days plenty of foreigners were smugglers. The Hong Kong - Seoul and Hong Kong - Taipei air routes and Pusan - Fukuoka ferry route were quite profitable. Complete a few smuggling trips a year and then hang out in Thailand, PI or India.

The irony is that as the "quality" of the foreigner increased over the years the regard Koreans feel for them decreased.

Wow - thanks for the comment. I'd heard of Between the Knees (though knew little about it, other than that it's on dvd), but not Queen Bee. Here's the summary of it at imdb:

Mi-hie's affair with her foreign English teacher comes to an end. Feeling that she is ruined for marriage, Mi-hie dubs herself the Queen Bee and begins the life of a prostitute in Itaewon. When she learns that her sister is dating an American, Mi-hie decides to make an example of him as a warning to others.

Sounds charming. I keep getting different dates on the film's release, but it seems to be 1985 - after the French scandal, to be sure. A longer synopsis in Korean is here, and a different poster (or vhs cover?) is here.

I've been coming across several foreigner crime stories from the time, and gold smuggling comes up a lot. It seems that was the time when the foreigners in the country were changing from being mostly altruistic (Peace Corps, missionaries) or military to people coming to 'take advantage' of Korea's economic growth by working (legally or illegally) there. Mind you, I don't see a lot of difference between the two periods I've been looking at (1975, when pot and rock and roll were banned, and 1984) - we still see the same mantra, 'foreigners are having a negative influence on us.'