[Update:
Korea Beat has translated the article, and I didn't realize this article was at the top of the Chosun Ilbo's webpage, as shown in Brian's post.]


Yes indeed, this June 30 article by Chosun Ilbo intern reporter Choi Hui-seon really takes the cake. An article about the 'sex crimes' of English teachers, taken from... interviews with victims? Interviews with the perpetrators? Police statements?

Oh, but the article does include a statement from Lee Eun-ung, who goes out of his way to mention "low quality English teachers," sex, and STDs in the same sentence [from Korea Beat]:

“Foreign instructors of low character frequently toss women away without compunction after attaining their goal of meeting them for money and sexual relations, so many of the women have their lives ruined by abortion or, of course, sexually transmitted diseases.”

I especially like the bit about how there is no end to the sex crimes of all sorts like molestation and rape against Korean women by native speaking instructors such as those mentioned in the article.

[This, from the Korea Beat translation, is also worth adding: 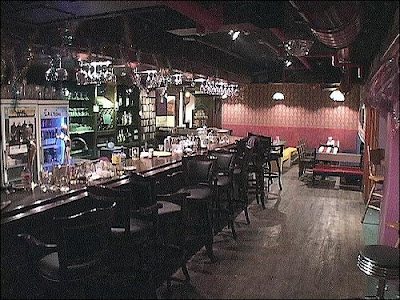 Mary Jane Bar
Of course, Anti-English spectrum showed just how concerned they were about Korean women when it first formed in response to the discovery of photos of a sexy costume party at Mary Jane Bar in Hongdae (from November 2004), which came to light in January 2005, as an interview (a word reporter Choi Hui-seon might need to look up in the dictionary) with some of the women in the photos (whose identities were spread all over the internet) and the owner of the bar by Ohmynews revealed:

"Some online articles and the Anti-English Spectrum cafe said we were prostitutes, western princesses [yang gongju, a derogatory term for women who went with soldiers decades ago], and brothel keepers." The women said, "Because of the media's selective reporting and the netizen's collective madness we are suffering incredible mental anguish and a person is receiving psychiatric treatment." 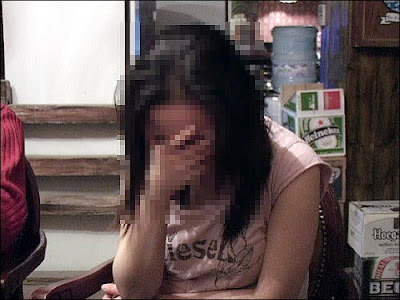 Some of the comments directed at the women (or threats made over the phone) included :
'Why don't whores like you just die quietly.'
'Foreigners' whore! Why don't you shut down your club?'
"Whores, are Western bastards that good?"

At least the second Joongang Ilbo article about this collective netizen madness at the time mentioned an opposing opinion, that such comments were "a representation of Korean men's inferiority complex". These attitudes aren't particularly new.

Of course, it's always best to forget this ugly aspect of the incident that caused the scapegoating of English teachers to gain traction in the media four years ago, so that you can broadcast stuff like this, from a 2007 episode of Pandora's Box: 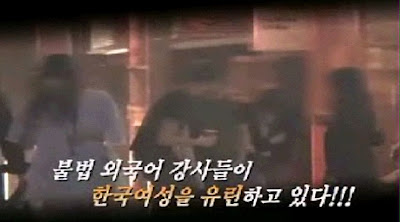 "Illegal foreign instructors are violating Korean women!!!"
Even funnier (or disturbing, whichever) was this part of the Pandora's Box broadcast (click to read): 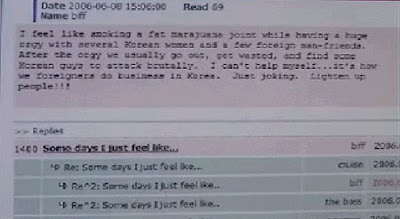 The tale of sex and drugs above ends with "Just joking. Lighten up people!!!" 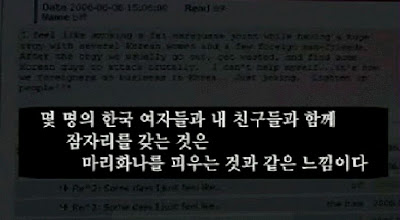 Of course, Pandora's Box only chose to translate the first sentence.


This is embarrassingly shoddy journalism.


Is it just me, or are these 'new classics' of poor journalism aimed at English teachers becoming more frequent? To be sure, with three such articles (this one, the Pressian 'Vampire' article, and the Yonhap article), June has been a busy month.
Posted by matt at 8:10 AM

Just take solace with the knowledge that the most discriminatory people are the loudest, not necessarily the majority. They have to be that loud, especially in the Anti-English Spectrum's case, because they're just plain wrong.

Unfortunately, my wife once informed me that the winner of arguments in Korea isn't necessarily who is right, but who is loudest. On top of that, Korea has enough national problems to worry about that take priority over scrutinizing the preposterous claims (arguably racist claims, in fact) of a group of bigots.

Your work on this blog is commendable.

Misogynist, xenophobic, racist...Is there anyone they don't hate?

I certainly hope that the high number of such articles in June was just a statistical clump rather than the beginning of a new trend. Time will tell.

Prof. Wagner said in March 2009 there would be an increase in this kind of thing as the foreigner bills moved toward a vote at the Nat. Assembly. Looks like we're seeing it:

"In the coming weeks, as Bill 3356 and others that seek to amend the Immigration Act move toward a vote at the National Assembly, Koreans and all of us living here can expect to see an increased debate on the alleged threat foreigners pose to this society."

That's not debate, though...It's planting the seeds of xenophobia in order to fabricate consent.

The empty cart makes the most noise.

Are you refering to yourself?

"Are you refering to yourself?"

I was referring to racists (racism is a form of ignorance) and people who can't spell.

Dae~hanminguk is so fuckin' bush league.

Let's give the Koreans a little latitude here. They have a right to be pissed on this issue. You have white men from a vastly superior gene pool (and without the high number of genetic abnormalities seen in Koreans), far better endowed, taller, better bone and muscle structure, better looking, better personalities, smarter, treat women better than they do, make more money, and come here and easiyly get as many women as they wanted. Lots of these are lonely Korean men who cant get women. They have a reason to be pissed. Imagine if it was the other way around and the Korean men went to your country and took the white women. Dont tell me you and your friends wouldnt get the piss on and go out bashing heads.

what an absurd back-handed call for understanding...

remarks like yours are precisely the same kind of bullshit as Lee's.

Matt, did you realize the "new classic" was gonna be a trilogy?

Look at those pixelated white faces...

If you are counting - that's three foreigner bash pieces in three days.

Anti-English spectrum punks have pull with the cops, they do more than just complain. Their members include cops, judges, prosecutors and on and on.
It makes for a very 1sided charge.

Also, sorry to throw this on your site, but in response to another comment made from the marmots hole...

komtengi ~ You're a punk bitch.

Late in the debate but...

This type of journalism is sad, disgusting and repulsive. It lives off and feeds bigots and is theb true incarnation of 'if it bleeds it leads'.

On the flip side, the comments about low quality English Teachers ring true in more cases than we like to admit. This is the result of Korea selecting people with such low standards of qualification (B.A. in anything and from an English speaking country). But, this selection does not excuse the frat-boy mentality that is clearly on display in Itaewon, Hongdae and in other nightlife areas across the peninsula.

We, as foreigners, shoot ourselves in the foot with both barrels often and regularly by our lack of profesionalism and by our behaviour out in public.

I do not care about the ajoshi puking in the alley. He is a local and what he does passes as nearly invisble. However, as foreigners we ARE visible and we do not help our image or cause when we engage in year-long frat parties paid for by playing bingo with our students because heck...I ain't a teacher and shucks I'm not gonna work as a teacher after this year...

Lets never forget that this issue is two sided people....