From a cabinet meeting into your arm

The ROK lifts all HIV testing of foreigners... except for E-2 visa holders
In October 2010 it was announced that the ROK government would cease requiring HIV tests for entertainers on E-6 visas and migrant workers on E-9 visas. This was done in part because Korea was to host the International Congress on AIDS in Asia and the Pacific in 2011, and having widespread HIV testing in place for foreigners (and not allowing HIV positive foreigners to enter the country) was a bit of a bad look. Despite, or perhaps because of, attempts to the contrary, HIV testing requirement were to remain in place for E-2 visa holders, however, making clear how successful AES's campaign had been.
Original Post:
Lee Myung-bak and his cabinet delivered a gift to Anti English Spectrum just in time for New Years. As AES manager M2 writes here (first result),

We've all worked hard. The efforts of native speaking teachers who really hate Korea to abolish the E-2 visa AIDS test finally came to nothing at a cabinet meeting on the 28th. A cabinet meeting presided over by the president passed an amendment to the enforcement ordinance abolishing the AIDS test for foreigners on E series visas. The E-2 visa was omitted from [this]. Native speaking teachers on E-2 visas will continue to receive AIDS tests for some time.

Meanwhile, low quality teachers have denounced our group as racist in order to try to abolish the AIDS test. They distort things saying that we are a racist group, that after we influenced public opinion the policy of AIDS tests for [their] ethnic group was made, and so mislead [people into thinking] its a bad policy in order to try to abolish it. Once again their efforts ended in failure.

Heartwarming stuff. Remember, if you think AES is racist or criticize them in any way, you are a low quality (저질) teacher. How having a negative opinion of them reflects on one's character or has anything to do with the quality of one's teaching is beyond me. They included this photo in their post, ostensibly of the cabinet meeting (it's obviously fairly recent, as new defense minister Kim Kwan-Jin can be seen on the left). 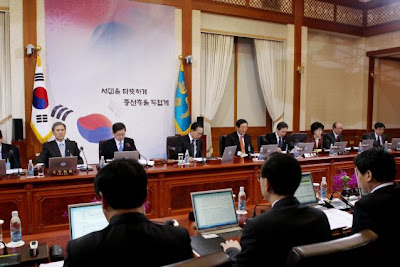 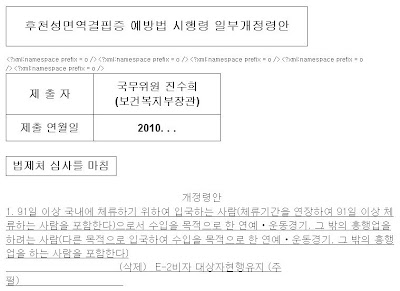 It reads in part "AIDS prevention law enforcement ordinance amendment. Submitted by cabinet member Jin Su-hui (Health and Welfare Deputy Secretary)" It's obviously not the complete amendment, however, as it only says that people entering Korea and planning to stay longer than 91 days (including people extending for longer than 91 days) and intending to earn income as entertainers or athletes... "(Deletion) E-2 visa subject current [system will be] maintained" [...] The first sentence doesn't finish and it doesn't say anything about the testing being abolished (or about migrant workers) so it's clearly not the complete amendment. The Ministry of Health and Welfare have made interesting comments about AIDS before, at least according to a post at AES from 2006 which talked about foreigners deliberately trying to infect Koreans with AIDS:

An official at the Ministry of Health and Welfare’s Korea Center for Disease Control and Prevention said, “There is little probability that someone will be infected by AIDS as long as that person does not have sex with a foreigner. However, if the rumors are true, then Koreans who have had sexual contact with a foreigner will almost all contract AIDS.”

In the same post as the quote above, M2 posted text and a photo from this article, which quotes Kim Ji-young of the Daegu AIDS Prevention Center talking about a HIV+ foreign teacher she met. The photo (of her and two others) has since been removed from the site, and the reason for this can be found in unpublished interviews for this article by Adam Walsh (thanks to Adam for sharing them with me and allowing me to publish them). In the interview, Kim Ji-young was asked about AES:

I think they are highly nationalistic and they treat foreigners as our enemies. I contacted them in 2006 to delete all the discriminating things they wrote about foreigners (especially those from the third world countries). However, they said “this is just a measure to prevent HIV/AIDS.”

For a group so concerned with preventing HIV/AIDS, they've been very quiet when HIV+ Koreans actually have knowingly had unprotected sex with people. Needless to say, considering the fact that the group formed due to the "unendurable humiliation" they felt after seeing photos of western men dancing and cavorting with Korean women (how they punished those women is discussed here), and considering the fake quote above saying "Koreans who have had sexual contact with a foreigner will almost all contract AIDS" (so much for only 'low quality' foreign teachers distorting and misleading), and the fact that AES now has at least eight posts about Quincy Black (with several more mentioning him) at their site, it shouldn't be too hard to see what their real reasons are for wanting to maintain HIV testing for teachers - stigmatization. Especially now that foreign teachers on E-2 visas are apparently the only foreigners being tested, they hope the connection between "foreign teacher" and "AIDS" will be strengthened (it's apparently strong enough, what with 80% or so people voting in an online poll by the prime minister's office to maintain HIV testing for foreign teachers back in July), in the hope that it will scare Korean women away from them.
So, for the foreseeable future, foreign teachers are going to be enjoying more of this: 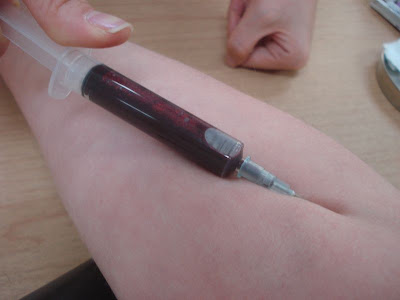 Happy New Year to everyone, my new year resolution is to get the heck out of this messed up country. Things ain't gettin any better for English teachers or E-2 visa holders and probably won't any time soon. A big middle finger to AES, and all other Korean Racists(Insecure Males who think they OWN Korea women), and Apologists.

Is it just me, or does that latest statement from AES sound like something straight out of the North Korean propaganda office?

Meanwhile, low quality teachers have denounced our group as racist in order to try to abolish the AIDS test.

The man clearly doesn't understand a single thing regarding the opposition to this policy.

How would he react if he were ever to finally understand that many, if not most, E2s would rather have the testing EXPANDED (to include other visas and, yes, Koreans) to anyone teaching children? (it's all about protecting the children; isn't that right, Mr. Lee Eungah?)

Would that mean we are still low quality foreigners because we still disagree with his narrow definition of AIDS-carrying teacher?

They distort things saying that we are a racist group, that after we influenced public opinion the policy of AIDS tests for [their] ethnic group was made, and so mislead [people into thinking] its a bad policy in order to try to abolish it

Well, since he admits right there that the policy was targeted at "our" ETHNIC GROUP, does that not mean that it is a racist policy? Certainly he has said in the past that Koreans getting E2s should not be required to have CBCs or AIDS tests or drug tests.

The policy is not aimed at E2s--which is bad enough considering other visas also teach children--but instead aimed at non-Korean E2s. That is the very definition of racist regardless of how he wishes to spin it.

Merry Christmas, you sad lonely little racist prick. I hope a foreigner marries any sister you may have, and he makes the rest of your pathetic life more miserable than it already is.