Shanghai is well known among movie fans as a paradise for buying contraband copies of the latest films, but in recent days it has become difficult to find pirated movies or music on the streets. This is because the Chinese government has been sweeping the streets to prevent potential embarrassments in preparation for the Shanghai World Expo, which opens May 1 and is expected to attract 70 million visitors from around the world.

The Korean language article has one of my favourite formulations - "불법 복제품의 천국," translated above as "a paradise for buying contraband copies of the latest films," though actually the above quote says nothing specifically about films. China in general is described in the Korean media as a "paradise for fake items," something a Korean studies professor told me years ago he was researching, and supported by conversations with adult students over the years. The "___의 천국" ("___'s paradise") has been used several times in the past to describe how foreign teachers perceive Korea (such as the 2005 episode of SBS's 그것이 알고싶다 about English Teachers, titled "Is Korea their Paradise? Report on the Real Conditions of Blond-haired, Blue-eyed Teachers," (which I looked at here)), while in 1984 (and later) during the French teacher 'scandal' Korea was referred to as a "paradise for foreign wanderers." It would be interesting to see when else the formulation "___ is a paradise for ____" appears in the media.

Of course, it's amusing to see China being described as a paradise for fake dvds in a Korean newspaper considering how prevalent the practice is in Korea as well (see here, though keep in mind the vendors are back in more permanent structures).

You also have to admire this photo as well. Long live racial/national stereotypes! 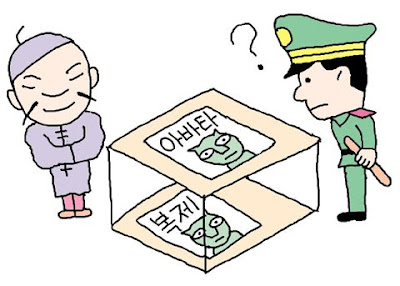 Note that the English-language article does not have the writing on the dvds seen above, which makes it more difficult to understand. The top one says 'Avatar,' the bottom one says 'fake.'
Posted by matt at 12:22 PM

And let's not forget Kimbap "Paradise."

But what's wrong if I regard Korea as a 'paradise'? It's not a paradise of illegal opportunity (don't have time for teaching privates). Does the fact that the country pays a decent wage for an honest job somehow require a harder entrance 'test'?

Regarding the fake DVD's - sure, Koreans have been buying those things left and right since they first became available. I'd ask my adult students, but I'm sure they wouldn't admit to it in front of their fellow students.