In mid-April, five articles appeared about drug arrests in Daegu (such as this one), where four native teachers and a Korean bar employee were booked without detention for smoking pot. The teachers were from the U.S., England, and Australia. The teachers smoked in a bar in Dongsung-ro in Daegu’s Jung-gu on several occasions. The police were then also inquiring into the whereabouts of another foreign teacher and the son of a high-ranking US army officer.

The article ended with the typical assurance that the investigation would be expanded, and it turns out there is now an update to this story, as the Maeil Gyeongje reveals in a report titled "Prosecutors: Smuggling Drugs in Rectum, a Pile of Foreigners Arrested."

A pile of foreign English teachers and children of US military officers have been caught smoking and selling marijuana and hash in Daegu, including 26 year old teacher Mr. B. Four were arrested, and 10 were booked without detention. The teachers got the hash in Hong Kong and hid it up their asses in a ‘bizarre (엽기적인)’ method of smuggling. As always, the police believe more foreigners are involved and will expand the investigation.

In an article that makes no mentions of rectums, Yonhap says that according to police, Mr. B made 17 trips to Hong Kong last year and smuggled 3.4 kilos of hash back to sell to people like Mr. P (20), son of an American military officer. The arrested include American, Australian and Scottish English hagwon teachers, 3 junior college teachers, 2 salarymen, and English Village teachers. As is par for the course, exactly how many of those are foreigners is not entirely clear, and no mention of the Korean Bar employee arrested in April is made. This was also reprinted in the Gyeongbuk Ilbo, and the Maeil Shinmun also did a story on it. So we have four articles about this story, or seven if we include the reprinted Maeil Gyeongje articles.

The Maeil Gyeongje has clearly been busy, breaking another story involving English teachers and drugs, and finding the need to publish it five times (out of a total 15 articles). Here's a translation of the Kookmin Ilbo's article about it.

Yet Another Native Speaking Teacher [Arrested for] Smoking and Selling Drugs

They sold and made synthetic marijuana using 700g of powder containing 'JWH-018', a psychotropic substance, which was brought into the country three times since last August. Last July JWH-018 was designated a psychotropic drug.

Until recently Mr. M had worked since last July at K University's English Hagwon in Seoul, while the other person he was booked along with, Canadians Mr. C (32) worked as an English teacher in a kindergarten.

They met at a club in Itaewon and using an international courier, or purchased the psychotropic substance directly from Shanghai and brought it back into the country in a soap container. They made synthetic marijuana by mixing the JWH-018 powder with tobacco and smoked it at their house. They also sold it to three drug dealers including Mr. Park (27). Mr. Park then sold it to ten Koreans at clubs in Itaewon.

A police officer said "There have been cases of people being arrested for selling the new drugs 'skunk' and 'Spice,' which contains JWH-018, but this is the first time someone has been arrested for making synthetic marijuana from this ingredient."

When I read of teachers 'making synthetic marijuana,' I pictured devious chemists at work - not some guys mixing JWH-018 powder with tobacco. According to the Yonhap video here, the evidence includes the powder, tobacco, the finished, mixed product ('Skunk'), magazines, and this high-tech cigarette rolling machine. 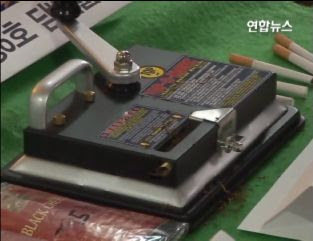 It's a good thing these criminal geniuses are off the street. Seriously though, how do you get caught selling something that looks exactly like a cigarette?

Police have booked without detention sixteen people including two English teachers for making, distributing and smoking synthetic marijuana. In Korea active foreigners are becoming the primary suppliers of drugs.

The charts and statistics the article supplies to illustrate this assertion are... non-existent. Note also the focus on the two English teachers. For some reason Yonhap and the Kookmin Ilbo felt little need to mention the French DJ who was also arrested (as the Chosun Ilbo did). On the other hand, Koreans aren't forcing themselves to learn French DJing techniques ('Don't forget the DJ Cam listening test tomorrow, kids!') and allowing the presence or lack of such skills to mark socio-economic status and highlighting the crimes of all the French DJ instructors brought into the country in order to draw attention from the failings of Korea DJing system.

Another Yonhap article with the same name has sub-headlines which read "16 booked in first case of psychoactive substance smuggling, production and smoking" and "6 workers deported for selling philipon." As the article notes,

6 illegal Filipino workers were caught and deported for selling phillipon brought from the Philippines and local marijuana, and four Koreans, including 46 year old Mr. Kim were arrested, and four more, including 33 year old Mr. Lee, were booked without detention for having bought and smoked drugs sold by the Filipinos in places like clubs.

In addition to this Yonhap story, Herald Gyeongje and Financial News also mentioned the Filipino workers. While they found time to publish articles about the arrests of the foreign teachers in this case, the other Yonhap article, the Kookmin Ilbo, YTN, the Chosun Ilbo, NoCut News, the Segye Ilbo, the Munhwa Ilbo, and the Maeil Gyeongje (with its article published 5 times) obviously did not find the story of the arrest and deportation of Filipino workers worth reporting on.

I'm still compiling information comparing media reports on drug arrests of foreigners and Koreans in April, but will get it posted eventually.

I saw that huge chuck of ass-hash in the photo. That's got to be a telephoto lens or they've combined several pieces cuz there's no way that mudpuppy came out of someone's ass.

As for the method, it's hardly bizarre. People get busted swallowing hash or carrying it in the sphincter fairly often - sometimes with dangerous results.

As for what makes the papers and what doesn't commenter oranckey pointed out the eery self-imposed silence surrounding the recent Breen/Samsung lawsuit.

In the choice to focus on foreign English teachers there's probably some pressure on the press not to print crime/drug stories about particular foreign nationals (like Chinese) and certainly not to write about Koreans doing drugs. But there's probably more pressure and public interest to get stories out about English teachers from those countries - there's even a "civic group" devoted to the cause.

I know there are some expat teachers who say the extra attention is because they are teachers!! and in Korean society teachers are held to a higher moral standard. . . But I think these folks have swallowed the kool-aid.

If there were so much scrutiny on the morality of "teachers" in Korea we'd see a lot more reports in the press about the wrong doings of Korean teachers. It's true there are some of these stories, but I'd really like to see a comparison of negative stories about each group over the past few years. Dollars to doughnuts you're going to see an enormous discrepancy.

I'd be curious to see the results of a comparison like that myself. I might have to do that one day. I know the Korean teachers I've talked to or are friends with hate Lee Myung-bak's changes (one friend went from an 8 hour day to a 12-13 hour day) and they feel the media is trying to dig up dirt on them (as a group) more often than they used to. When you consider the size of the respective groups, however - 480,000 Korean (school) teachers vs 22,000 foreign English teachers (7000-8000 (school) teachers and 15,000 or so more hagwon teachers), there would have to be about twenty times as much negative coverage of Korean teachers to be proportionately equivalent.

The thing with drugs is that the media does report on arrests of Koreans, it's just that they only seem to report a fraction of them. The arrests for April reported in the paper added up to less than 100, but when 8000+ people have been arrested annually, that works out to about 700 arrests on average per month - so its easy to see that not many are being reported. Whether the fault lies with the press or with the police - it's they who release information about arrests in press releases or press conferences - is a question worth asking.

I can't stand the white type on black background.

Everyone is already aware of the "civil group" you mentioned. They have been a hate group from the beginning, and specifically target non-Korean foreign teachers (you see, gyopos are foreign, too, but don't concern them because they are not white or black). The reporter of the story (a two-year old story, really?) you linked to is Kang Shit-who, a well-known member of that same hate group, and writes up all of the Times' anti-foreign-teacher stories.

Why don't Koreans focus on the real drug problems here, the ones that cause millions of dollars of damage each year (in terms of health insurance, hospitalazation, car insurance, work productivity, etc.)? Of course, I'm talking about alcohol and cigarettes, by far the two most widely used drugs in Korea