Prior to Children's Day, my school had a 'practice' sports day. There were three grades on the field at once, so things were pretty busy. I remember having the entire school out when we had sports day in elementary school, but living in a small town, the school grounds were likely six or seven (or ten?) times bigger than most schools in Seoul, and we also didn't have 300 kids in a single grade. In fact, I think my school had between 400 and 500 students. Our sports day (called 'tabloid day,' for some reason), involved the grade 7 students running the different activity stations and the grade six students leading a team with students from grade 1-6 in it - something unimaginable in the Korean context, I suppose. When I was in grade 7, relaxing and running a station, the grade six students who were supposed to be leading their teams from station to station got mixed up and the teachers, demonstrating great patience, simply decided to cancel sports day after an hour. Sports day here is a little more organized: 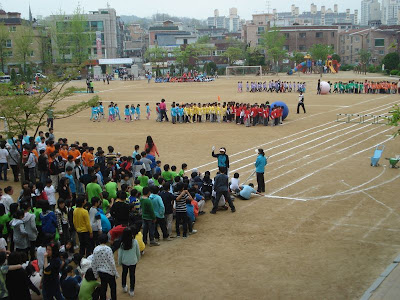 As seen above, the younger students pushed giant balls, had small group games of tug-of-war, and running races in groups of six. The older students did a running race around the schoolyard that included hurdles and tumbling, as well as a relay race. One other activity I didn't understand at first, unable to figure out why the kids were all lined up until I finally noticed the very long rope they were holding. 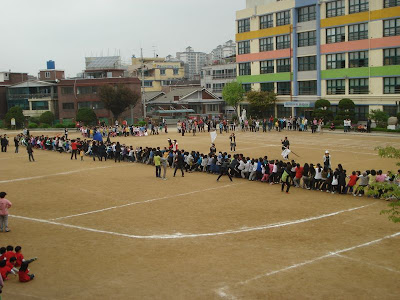 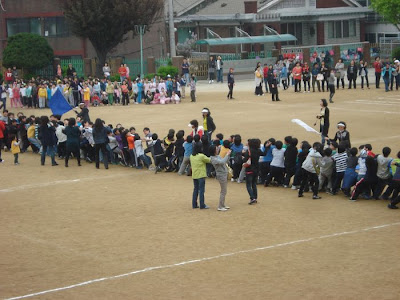 What was interesting was just how elaborate all of the marching to get them into place was: 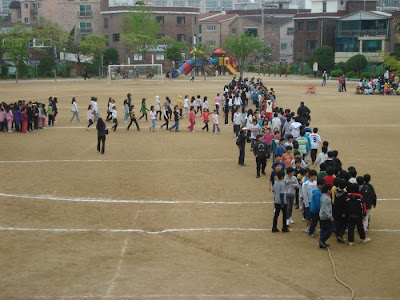 Of course, it shouldn't be so surprising that Korean schools still show the influence of militaristic education stretching back to the colonial period, as described here (see also, on a lighter note, here). Also related to schooling back in the day were the 'lunch box checks' of the 1970s which were put in place to limit the use of rice in meals (a policy which led to makgeolli consumption dropping and 'fake' (non-rice-based) soju attaining a popularity it still has today). Of course, lunch box checks were necessary back then since lunches weren't served by schools. A friend of mine who grew up in Hwagok-dong (the location of the first development in Seoul's west end in 1965) in the 70s and 80s remembers kids who came to school and just went outside at lunch and drank water because they had no lunch to eat. He also talked about seeing fried chicken restaurants but never being able to eat there, how, if you went to a meat restaurant the night before, you'd wear the same shirt the next day so as to show off its meat smell to everyone, and how bananas were super-expensive and kids who brought them to school were envied.

Nowadays, lunch is provided at school, for a fee. Not everyone can afford it, and as Yonhap noted (almost two months ago), the issue of free lunches has become a political issue ahead of the upcoming elections.

Opposition candidates are promising to exempt all elementary and middle school students from lunch expenses, seeking to appeal to low-income voters in the nationwide elections, which are seen as a litmus test for the Lee Myung-bak administration ahead of the 2012 presidential election.

The main opposition Democratic Party (DP) and other minor parties insist the provision of free lunches conforms to the Constitution, which stipulates free compulsory education through middle school. The opposition parties also contend that the current selective program hurts the self esteem of students from low-income families placed on the free school lunch list.

Currently, 970,000 million elementary and middle school students from low-income households are under the state-sponsored free meal program, according to government statistics.

The ruling Grand National Party (GNP) and the government have dismissed the opposition's calls as a "populist" tactic, arguing that providing free meals even to children from well-off families with taxpayer money could undermine the country's fiscal soundness.

Finance Minister Yoon Jeung-hyun said recently that he cannot understand the calls for universal free lunch, suggesting the demands may have been motivated by "socialism."

I imagine the good finance minister will be shocked when he learns about the health insurance and pension system, or if he reads anything about Park Chung-hee's five year economic plans. Of course he realizes that it's just opportunism on the part of the DP (especially when you see them saying, "There would be no problem if the government scrapped its four-river project and other exhibitive projects"), but it's much easier to shoot back and call 'em all commies.

[The GNP] agreed Thursday to more than double the number of free-lunch students to 2 million by 2012, with the related annual budget estimated at 400 billion won. They also agreed to entirely computerize the social welfare information network so that the list of young schoolchildren put on the free lunch list would be kept secret.

How long until that information is hacked and appears on the internet?

Of course, it wouldn't be Children's Day without a report like this:

A survey of 5,437 students ranging from fourth grade to high school seniors showed that 53.9 percent were happy with their lives. This is below the 26 OECD members’ average of 84.8 percent and the top-ranked Netherlands, where 94.2 percent of students said they were happy.

Not that anyone is shocked by this, or by reports that fitness levels among students are falling.

I didn't give any of this much thought on the holiday itself, mind you, choosing to enjoy a barbecue on this stretch of the Han River instead... 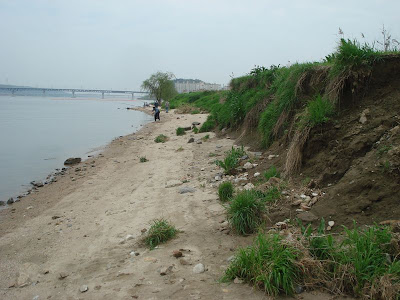 it kinda reminds me of the schoolchildren marching into the meat grinder in the Pink Floyd "The Wall" film.

It should also be noted that, in 1943 when Korean language classes were totally phased out of colonial schools, these classes were replaced with P.E. and singing classes. The P.E. classes
focused a great deal on the Japanese martial arts of karate, judo, and kendo, as well as instructing students on the fabricated version of "budo"/"bushido" which Japan was selling to its own soldiers and people. Hmmmm . . . what are three famous martial arts taught in South Korea today? Ummm, Taekwondo (best known in the 50's and 60's as "Korean Karate"), "Yudo," and "Komdo."