On subways and in store windows these days is this poster: 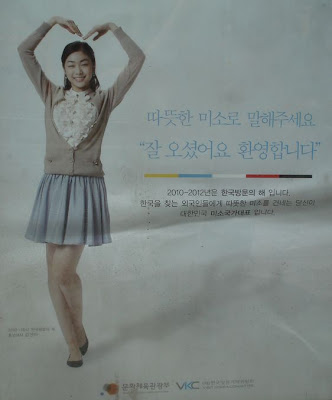 The first part reads 'Speak through a warm smile, "Welcome, come well."' Why, you may ask? "2010-2012 is the visit Korea year. Speak with a warm smile to foreigners who discover Korea, you are a smiling national representative of Korea." I wonder if this campaign to remind people to be polite to foreigners (somehow I doubt the invitation to 'come freely' extends to white males) is a national one or if it's just based in Seoul.

Of course, that poster is just one of ten to fifteen times I saw Kim Yuna's face today. It's nice to see her hawking watermelons for Homeplus - in a 'Be the Reds' shirt no less: 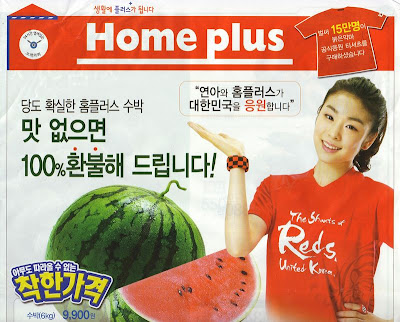 Yes, it's that time of (every four) year(s) again. It's already appearing on beer bottles: 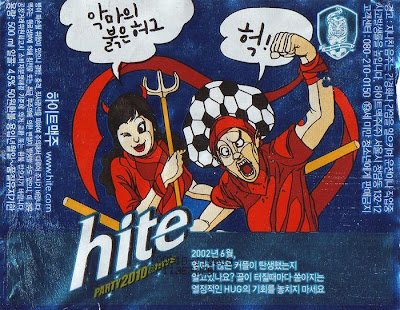 The two people above look really look like the kind of people you'd like to be sitting next to as you cheer for Argentina. The Korea Herald also looks at two soccer-related films coming out soon, both of which seem to suggest that people from other countries in Asia would like to jump on the Korea soccer bandwagon. Unfortunately, one of those films is a JSA-style movie featuring North and South Koreans getting together on friendly terms, and probably couldn't come out at a worse time.

On the topic of alcohol bottles, this is interesting: 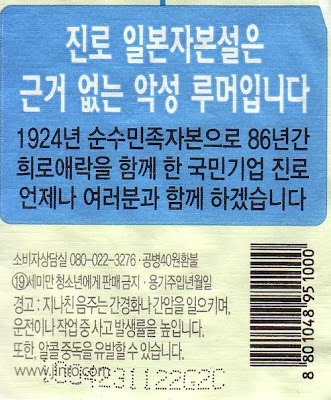 "The theory that Jinro is a Japanese enterprise is a baseless, vicious rumor. Since 1924 Jinro has been a pure minjok (ethnic/national) enterprise and for 86 years one national company, Jinro, has always shared all sorts of emotions together with people."

There are other companies that I think people would also like to think are pure minjok enterprises, something I was reminded of when I saw this article about Lotte today, which mentioned that

Shin established Lotte in 1948 as a maker of chewing gum and has taken a firm root both in Korea and Japan, expanding its business horizons to beverages, retail, fast food chains and amusement parks.

For some odd reason, the article fails to mention that Lotte was started in 1948 in Japan by a Korean who was raised in there, and didn't make its way to Korea until 1967.

"The theory that Jinro is a Japanese enterprise is a baseless, vicious rumor. Since 1924 Jinro has been a pure minjok(ethnic/national) enterprise and for 86 years one national company, Jinro, has always shared all sorts of emotions together with people."

Wow, hell of a quote you found there. By the way, what sort of emotions are shared one wonders. Reminds me of your "How to drink soju" post:

"So why do we drink Soju?
To abuse our bodies.
Why abuse it?
Because life is sad.

So we gulp it down and say to that fucking sadness, "Hey, sadness, I had a drink today, l'm ready to take you on."

Oh my god, they're advocating Communism!

I really like the language play in the Hite World Cup label. There's bilingual punning everywhere these days...

Since I don't drink soju much I wouldn't have come across the label. When did that appear? Anyway, thanks for bringing it to our attention.

BTW, you might want to have another crack at the translation of 여러분, methinks.