Bookending 5 years of blogging with posts on Dokdo 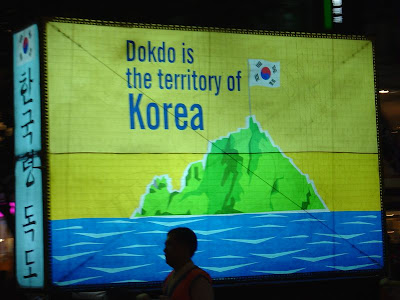 Huh. Five years. Who'da thunk it? We'll see what the next five years holds. And the first post was about the island that shall not be named and territorial claims to it appearing in the Buddha's Birthday parade. Fun times. As Nathan at Korea Beat wrote awhile ago,

I remember back in 2005 suddenly having my afternoon lessons cancelled so that students could be "educated" about Dokdo, which really meant listening to some speeches and then memorizing a Dokdo song.

As he notes, that was in middle school, but learning the Dokdo song was something that took place in elementary schools as well. I remember hearing it preceded by, "미국 똥! 외국 똥! 캐나다 똥!" Yup, good times. Ah, let's forget about it and look at these cute stickers!

(They spelled Korea wrong)
My friend Andrew found these in a stationery store at the time and gave me one. As Korea Beat notes here (and also in an article here), the curriculum has been altered to allow for more Dokdo education.

Under the new curriculum middle school students will study four areas of history rather than three, and two of the areas will include depictions of Dokdo.

I wonder, this administration being what it is, if this will mean dropping that whole useless 'democracy movement' chapter. This was interesting as well:

When data on the agreement regarding the illegal seizure of Dokdo by Japan is investigated, the problems are clear... the need to properly remember history can be clearly seen when one investigates the invasions of Southeast Asian lands, historical troubles, and other longstanding problems."

I imagine by "invasions of Southeast Asian lands" they aren't referring to Korean participation in Vietnam.

At any rate, Dokdo education is going strong, it seems, judging by this display I saw in the center of an elementary school in eastern Seoul: 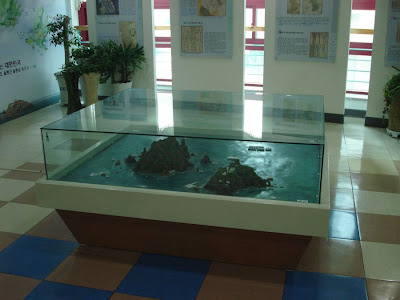 Dokdo Love Learning Area
There are maps, more maps, video, models - everything you need to indoctrinate young children. One thing is for sure though - whoever is making those models of the islands must be making a killing. I saw these ones in Gimpo Airport subway station last week: 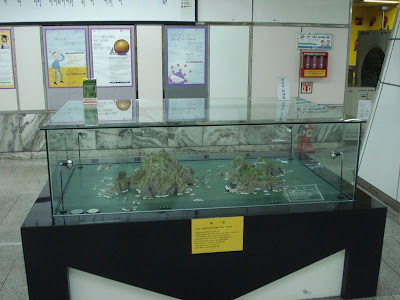 My two cents: I think Dokdo serves the same purpose in South Korea as Anti-Americanism does in North Korea - it serves to whip elements of the public up into a pavlovian-response nationalist/xenophobic lather at the drop of a hat and distract people from more important issues (or help unpopular politicians raise their approval ratings, much as Roh Moo-hyeon and his 'diplomatic war' of 2005 did). Hence the need to teach this to children at a young age. Korea could solve the 'problem' by pressing their claim, but why would the government want to get rid of such a useful mobilization tool? Similarly, B.R. Myers argues that better relations with the US would deprive the DPRK of its justification for poverty and for the military-first policy that is said to be responsible for it.
Posted by matt at 11:50 PM

I wrote a post on Tokto five years ago and my sentiments have changed little: There is too much shrillness and, as you say, it is milked as a way to whip up support for oneself or organization, but even for those who don't want to do this, it can't be ignored because there is a kernel of importance and relevance to the issue, even if the shrillness were to completely disappear.

About this:
I imagine by "invasions of Southeast Asian lands" they aren't referring to Korean participation in Vietnam.

Are you saying Korea "invaded" Vietnam? Actions calling for expressions of regret, indeed, but an "invasion"?

Can you settle the whole Corea vs. Korea thing for us once and for all? Was the "K" really a dirty Jap trick to move the nation down in alphabetical order? Or are those stickers (and similar paraphernalia, e.g. "Go Corea!") in Spanglish?

Every time Dokdo is in the news, I check page four of the paper for what's REALLY going on. These days it often seems to be something about the 4 rivers project.

The Japanese didn't unilaterally change it from C to K. However, the great compromise should be a G, representing the Goryeo that Korea came from...

Roboseyo, that's a good tactic to use. Though some groups in Korea can be quite shrill about Tokto, the issue often gets more play in the K-blogs (in terms of prevalence and what portion of all stories they occupy) than they do on the average Korean's radar.

The Central Scrutinzer, a quick Googling of "Korea versus Corea" should give you a definitive answer.

as anoyher myth, Japan force korean to chenge thier name?

No, hoihoi, that pretty much happened, though it was not universal. I think some 86 percent ended up following this compelled "suggestion."

Kushibo - I'm sure the villagers interviewed in the documentary 미친시간 would consider it an 'invasion'; on the other hand, just using hyperbole (instead of regular bole) to make a point.

The Central Scrutinizer:
AYes, Kushibo's Korea/Corea post is well worth reading. For some reason the formatting is all screwed up here, but it has a list of books with Korea/Corea in the title prior to colonization; Korea wins.

hoihoi51:
What Kushibo said. Sure it wasn't 'mandatory,' but if you wanted such things as government jobs, the ability to go to school, or ration cards during the war, you needed a Japanese name.

Why don't they both give agree to give it to America so they can build an air force/army base on it?
Neither country like have Americans on their territory.
It would solve the Futenma problem nicely :)

I've thought of that myself. Either that, or splitting the islets between the two countries. Seriously though, I've read that Japan isn't even all that concerned with Dokdo - it's the islands that it disputes with China/Taiwan and Russia that of more concern to it, and appearing weak in regards to Dokdo might weaken its claims on the other islands.