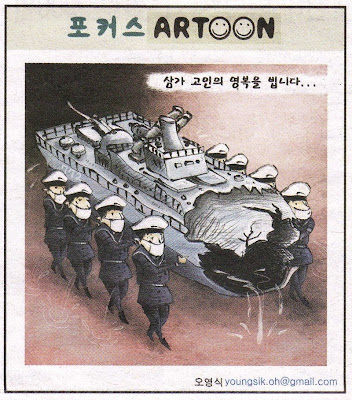 "Respectfully pay tribute the souls of the deceased..."
From the April 16 issue of Focus.
The Korea Herald has an article about the funeral held for the sailors lost in the attack on the Cheonan, which did not have anything about 'vowing revenge' when I read it last night.

The televised funeral was held at a memorial park within the premises of the Navy’s Second Fleet Command in Pyeongtaek, Gyeonggi Province, where a South Korean Navy vessel sunken during the deadly skirmish with North Korea in 2002 is displayed. Six South Korean soldiers were killed during the naval clashes with the North near the NLL in 1999 and 2002.

I didn't realize that ship was on display. Of course, considering how the previous administration(s) tried to sweep that incident under the rug, that's not surprising. The Joongang Ilbo also relates this story related to the 2002 naval clash:

Yoon Doo-ho, father of the late Cmdr. Yoon Young-ha, also visited the Pyeongtaek altar. Commander Yoon was killed in action during the Second Naval Battle near Yeonpyeong Island between South and North Korea in 2002.

Senior Chief Petty Officer Park Gyeong-soo, one of the six missing sailors from the Cheonan, fought in the Yeonpyeong battle with Yoon. Park was so distraught after the battle that he didn’t go near the sea for almost six years before boarding the Cheonan.

How very unlucky - and tragic - for Senior Chief Petty Officer Park Gyeong-soo to have been involved in both battles. Hopefully the memory of the sailors who died on April is treated more respectfully than the memory of those who died in 2002 has been.
Posted by matt at 4:13 PM