Catching up on some links

Jamie over at Two Koreas is posting again, after taking a year or so off to finish his dissertation. It was Jamie who convinced me to start blogging with him over five years ago, and I started this blog to post things that didn't really fit within the parameters of that blog. I've posted there from time to time since, and will try to continue in the future (though it can be hard enough posting regularly here - I spend too much time doing research). At any rate, Jamie has posted links to an article he wrote with Rob Prey for Japan Focus titled Between Migrant and Minjung: The Changing Face of Migrant Cultural Activism in South Korea, as well as to his dissertation, The Postdevelopmental State: The Reconfiguration of Political Space and the Politics of Economic Reform in South Korea, an "exploration of developmental state theory, the liberal left, and the restructuring of Korean political economy," which is available here.

In other news, the Hankyoreh reports that the military is being mobilized to aid the massive transfer of funds from taxpayers to construction companies / white elephant that is the four rivers project:

[T]he ROK Army Second Operations Command and Busan Regional Construction Management Administration concluded an agreement for army engineers to provide support for construction along Area 35 of the Nakdong River. To do this, the Defense Ministry assembled a unit centered on the 1117th Engineer Group of the Second Operations Command, which it will deploy from June to next November. The task of the army engineers will be to take the sediment soil removed during deep dredging of the riverbeds and moving it to a different location. Some 117 military engineers and 72 units of equipment including 50 dump trucks, will be deployed to the site. Military engineers will billet in a location near the construction site. The Defense Ministry has budgeted some 2.75 billion Won ($2.47 million) for equipment and billeting. The Busan Regional Construction Management Administration will support the costs.

The article notes that this is the first significant mobilization of military labour since the dictatorships, and gives examples from the past:

According to a report submitted by the Defense Ministry to Lawmaker Ahn on military deployments to national construction sites, the army was deployed as a major source of construction labor force to national projects during the military dictatorship, such as the construction of the Seoul-Busan Highway (1968 to 1970), Uljin-Hyeon-dong Road (1982 to 1984) and Seoul Beltway (1991 to 1994).

Incheon Airport has been voted best airport in the world for the fifth year straight. How best to celebrate this? Why not sell it -- for less than it's worth? Why is the government looking to sell 49% of its stake?

"After cutting taxes on high-income households and blowing an enormous amount of money to renew the country's four major rivers, the government is desperately trying to sell the airport to help mend its massive budget hole."

Actually, an acquaintance who works for the airport planning division has cited the need to fund the four rivers project as the main reason for wanting to sell it.
For interesting (if not-so-related) reading, Park Noja's essay "Militarism and Anti-militarism in South Korea: “Militarized Masculinity” and the Conscientious Objector Movement" can be read here. I wrote a bit about the Conscientious Objector Movement here about five years ago.

Japan Focus also reprints an article from 2005 originally printed in the Korea Times:

[A] book on pro-Japanese art works has been published by the Institute for Research in Collaborationist Activities, an organization working on nation-related issues in Korea's modern history and putting forth the correct history by illuminating Koreans' pro-Japanese activities during the Japanese occupation.

By 'illuminating' the writer means 'uncovering history in order to stomp on what ever scurries out.' Anyone who talks about 'correct' history worries me.

The book is composed of a collection of art works that have been on display in a pro-Japanese arts exhibition that has been touring the nation since last October under the title "Choson in the Japanese Colonial Period and War Art" and features war footage and the difficult lives of Choson people at that time.[...]

Four-hundred pictures, including art works, visual images and various propaganda of the Japanese regime, depict the lives of Korean people who had to put up with the plundering and exploitation of manpower as well as resources through conscription of labor, the draft, and the forced mobilization of comfort women. The book also enables readers to witness pro-Japanese activities of representative Korean painters such as Kim Eun-ho, Kim Ki-chang, Kim Kyong-seung and Shim Hyung-gu whose work beautified and praised Japanese invaders at that time.

Question: Are they really still invaders if they've been there for 30+ years?

At any rate, what I want to know is if anyone knows what the Korean title of that book might be. I'd be very interested to see it or anything else which might collect visual propaganda from the colonial period. Here's an essay (pdf) about colonial era postcards from Korea, while this page has a collection of vintage posters for Japanese industrial expositions. To find images from the colonial period, doing an image search on Naver or Google for 내선일체 (naisen ittai, or 'Japan and Korea as one body') will turn up several images, such as this one: 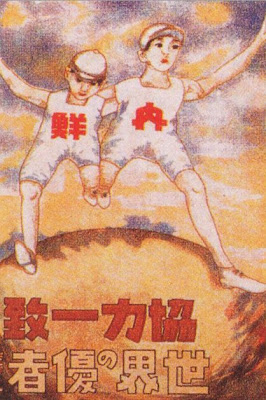 Incidentally, I never would have guessed that the publisher's Korean name was "민족문제연구소" ... if I only knew the Korean name and hadn't seen their booklist, I'd figure they were either an immigrants' activist organisation ("민족문제" = "ethnic problems"), or a unification thinktank ("민족문제" = "the National Question").

Thanks for the replies. I'll be sure to track the book down soon...

Park Chung Hee, former Korean president, told me about this story. Ex-soldiers around him start to say, "Japan is evil" as they get drunk. Then, Mr. Park begins to talk about his experience, calming them, "Just a moment".
He came from a very poor farming family, so he nearly gave up taking a higher education. However, young Park could go to school thanks to Japan's introduction of a compulsory education system into Korea that was under the Japanese rule. He graduated from the Manchuria Military School at the head of his class. This enabled him to continue his study at the Army Academy in Japan, and he could graduate from it. Japan gave such opportunities to such Korean boys as young Park. Mr. Park reminisced about the past, saying, "Japanese did some wrong things like having forced us to change our names into Japanese ways, but in general, they were fair to us".

From Korea in War, Revolution and Peace: The Recollections of Horace G. Underwood:

"In the years immediately following World War II, Korean educators had to confront the legacy left by the Japanese.[...] With rare exceptions, Koreans were allowed employment only as laborers, minor clerks, and low-level technicians. Education for Koreans was severely limited in both quality and quantity.[...] The education system introduced by Japan was aimed primarily at serving the Japanese living in Korea, and the limited schooling available to the Koreans was deliberately of a lower quality than that for the Japanese. [...] Any Koreans hoping to get a university education had to go to Japan or overseas. As a result of this policy, less than 25% of the Korean population of 20,000,000 people in 1945 had any formal education, and far less than 1% had even a senmon gakko [technical college] education. For the nation, the result was a pitifully small manpower pool."

As for Park Chung-hee, here's the interesting fact for the day: According to Underwood, the Japanese Kempeitai(military police) headquarters was on Namsan, and was later taken over by the KCIA, started by Park.

there was already few anti- japanese activist in korea since 1920..