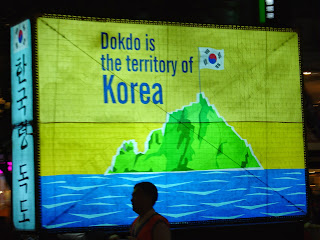 I'm sure you're wondering what kind of parade this float appeared in. A nationalist anti-Japan rally? A Mayday rally? Nope. It was in the Lotus Lantern parade - the one that celebrates Buddha's birthday. And oh yes, it brought hearty cheers from the spectators around me. This float was almost as good as the one which had a tv with the Dalai Lama talking on it. In the corner of the tv were the words 'Dokdo in Korea'. Which of course, makes sense. Anyone I know who has ever met the Dalai Lama has told of how they tried to ask him questions about the path to enlightenment, only to be met with yet another speech about how arrogant the Japanese are to believe that Dokdo belongs to anyone besides Korea.

Sigh. Sorry if I sound exasperated. But when Dokdo is brought up, my first and second grade students will begin to sing the '독도는우리땅' song. You'd think changing the last word to 똥 and drawing two cartoon blobs of poo poking out of the water would make 8 year olds laugh, but you'd be wrong (well, 1 or 2 of the boys did). And it's funny, but I don't remember singing songs about territorial disputes when I was in the first grade (though a rousing chant about the Black Death still sticks in my head). The mere mention of Japan to my middle school students gets a similar response ('Ohhh, I hate Japan!'). For a written composition test, one of the topics a friend gave his university students was 'Why I Like Japan'. Few chose this, but one who did wrote, "I like Japan because they are so good at lying..." The response from my adult students (and people in general) isn't much different. Not to say that everyone is uncritical, but nonsense like this is more the rule than the exception. Of course, when their elected representatives provide examples like this, I guess no one should be too surprised.

I think a more appropriate float would have had models of the islands travelling down the street followed by a flock of sheep.
Posted by matt at 5:38 AM

How are You
Let me tell you something about korea, which informations from
Dynamic korea
Today I would like to let you know dokdo island.
Among the numerous historical documents showing that Dokdo has been an integral part of Korea since ancient times, the following are the most important official documents:
Samguksagi (History of the Three Kingdoms) is an official history book written in 1145 A.D. on the Three Kingdoms of Korea, namely the Silla (57 B.C. to 935 A.D.), Goguryeo (37 B.C. to 668 A.D.), and Baekje (18 B.C. to 660 A.D.) kingdoms. This book, edited by Kim Bu?sik, a historian and the then prime minister of the Goryeo Kingdom, contains the story of the conquest of Usan?guk in 512 A.D. by Isabu, a general of the Silla Dynasty under the reign of King Jijeung.
In spite of many proofs, japanese don't stop insisting.They still demand dokdo is japanese called Dakeshima.However, already dakeshima turned out another island.This happening will be occured lots of times by japanese government, until theyfeel ashamed.
How come do they want korean's small island dokdo.Japanese government approved wrong history text book, so no more rightous andtruth in japan.When Poor japanese will be isolated someday, but they keep insisting or trust japanesegovernment. It seems kind of invasion. If do not stop bugging, korea government kick the butt.

Hey 'dokdo island' you must be Korean, no? Well I am Korean too, and people like you give Korea a bad image. And please get your facts straight about Dokdo, Dakeshima and the Japanese text books. I always say 'fix what's wrong with me before I criticise others'. You could be spending your time helping to raise awareness of disadvantaged minorities in Korea, or help the homeless or something useful, instead of wasting your time and everyone else's by going on and on about the piece of little land the size of a 코딱지. And you say I'm not a patriot? I'm a patriot because I care about real issues that are happening in Korea, like the education system, the life of minorities, like gays, handicapped persons and migrant workers etc. Gosh, people like you really annoy me. You are embarrassing.