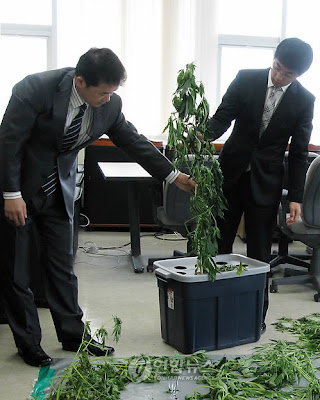 As I mentioned in this post, the Korea Herald had an article last week about a Korean American English teacher busted for growing pot:

Police sought an arrest warrant for a Korean-American English instructor Wednesday on charges of growing and selling marijuana worth 20 million won ($17,000), according to Yonhap News. The suspect, 27, allegedly cultivated marijuana at his home since January and sold it to foreign residents, according to the Ulsan Metropolitan Police Agency. Police said the suspect is believed to have studied cultivation methods and was able to grow the plants here after smuggling seeds into the country in June.

Yonhap posted an article on the 24th titled "Foreign-born Korean (동포출신) English teacher [busted for] growing marijuana indoors and dealing." Nice of them not to just blare "Foreign English teacher arrested for drugs" as a headline (even the sub-headline reads "Ulsan Police -3 Daegu area English Hagwon Foreign Teachers Arrested") It wasn't a good week for arrests of Korean American English teachers for drugs.

The article includes several photos, such as the ones above and below (and another of the books he used in cultivating the plants). It notes that the accused was living in Daegu's Nam-gu, and that in one room in his house he had 8 plants totaling 320 grams as well as a great deal of equipment for 'processing' it.

Police also booked without detention two foreign English hagwon teachers who worked in Daegu, one a 26 year-old American, for smoking Marijuana at home in foreigner clubs after buying it from the grower. Said grower also said that in America smoking pot isn't considered to be a big problem. There's footage (of course!) here.
Posted by matt at 9:31 AM