Korean Modern Literature in Translation links to an essay by Mark Morris at Japan Focus titled "The New Korean Cinema, Kwangju and the Art of Political Violence," which looks at recent films about the Kwangju Uprising, a similar topic I looked at here. More importantly, there is an interview with Choe Yun, who wrote the novella "There a Petal Silently Falls" (translated into English here: Part 1 ; Part 2), on which the Jang Sun-woo film A Petal is based. She made several interesting comments:

Not only for me but for many writers, the Kwangju Uprising was like a gigantic pool into which poured all the anguish of past eras of Korea’s modern history. It was a reality which could be gotten past without being written of, a reality that exceeded the real. One of the great powers which literature always possesses is that of writing a reality which cannot be spoken. In the context of the Korean political situation, however, Kwangju was like an enormous hole into which poured all debate, unable to be assimilated through reporting or testimony, cries or tears. In it they mingled and smouldered. [Emphasis added.]

I couldn't read what she said about the Kwangju Uprising being unable to be "assimilated through reporting or testimony" without thinking of something similar. As I've noted before here, in The Kwangju Uprising, Kim Chung-keun, of the Donga Ilbo, describes his inability to describe what he saw in Kwangju:

Words fail me in seeking to describe what I saw. "Brutality." "Outrage." "Indiscriminate assault." The words fall short, far short, of the reality. I came up with this expression: "hunting humans", or "Human hunting." 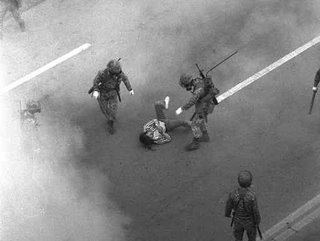 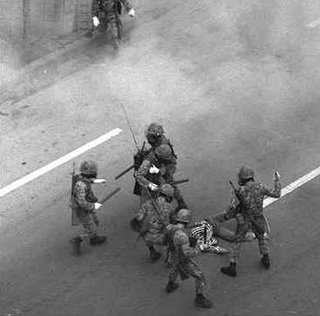 Choi also comments on the interaction (or lack thereof) between history and literature in Korea:

Literature was directly linked to politics, and a historically critical conscience occupied the forefront of literature. Historical novels, and interest in history in general, remained strong within Korean literature; for ordinary Korean readers, a special relationship was formed between literature and historical novels to the extent that they could be taken as synonymous. From the 1990s, however, Korean literature began to escape from the heavy influences of reality and history and to display incomparable diversity in its depiction of various subjects. However, such advances should not lead us into mistakenly believing that facts and reality from the past no longer hold any importance. Korean literature still seeks to interact directly with historical reality in the name of realism and truthfulness.[...]

This does not mean that I simply want to criticise younger Korean readers for being oblivious to the past. I even wonder if it was forgetfulness of the extremity of the past events that actually helped Koreans to move without fear into the future and build their modern nation. Also, I can only speculate about whether being oblivious in this way was in itself a positive source of energy in a uniquely Korean way.

Something worth noting is that one reason people might be oblivious to the past is that they don't read. Korea ranked last in a study of 30 countries' reading habits.* It's an interesting question whether this forgetfulness is a positive source of energy or not (in some ways I believe it is), but the problem is that it is very selective forgetfulness. As I noted here, historical films about the 20th century became more and more simplistic (and often happy to blame outsiders (ie. the US or Japan - not China!)) over the last decade (though that decade coincided with the sunshine policy and the Roh administration, so perhaps it's not a long term trend. Or rather, I hope it's not). Also, as B.R. Myers notes in his new book, The Cleanest Race,

Many in the West wrongly assume, as George Orwell did, that a regime cannot reinvent history without resorting to brainwashing and intimidation. One need only look at the South Koreans, who celebrate their liberation from Japan every year with nary a mention of their liberators, to see how easily nationalist mythmaking goes down even in open societies.

This similarity between North and South Korean historical myths is also looked at by Scott Burgeson in his book 더 발칙한 한국학 in the full version of this essay, where he calls the U.S.-led liberation of Korea an "absent presence" at Independence Day ceremonies. With these things kept in mind, I'm not sure that I would describe the younger generation as being "oblivious to the past." The past - as viewed through a nationalist, 'we are such a small country who has been victimized so many times by outsiders' lens - is still quite present.

I'll take a closer look at Myers' book another time, but if you have any interest in South Korea, then his book (about North Korea) is well worth reading, and basically gives the reader a skeleton key to understanding North (and South) Korean myths.

It would also be nice if such historical plots for novels and films dealt with something other than these standard themes in favor of more human-based, real-experience history. In terms of human-based, I'm thinking in terms of "서편제"--the wonderful film about the itinerant pansori singers who suddenly find themselves in a modern South Korea and their personal struggles to find meaning in their dying art and unappreciated lives. Here is something truly unique, truly interesting, and a bit more universally appealing.
How about a historical film dealing with the "백정" class at the turn of the century, when
they experienced a moderate amount of social liberation with the Kabo Reforms, but continues to document their struggles for acceptance amongst other Koreans (this brings to mind a true story I read by a missionary in Korea about how he tried to make his church truly equal by allowing all social classes in for services; but, the upper-class yangbans of the congregation refused to share the same house of God with such "untouchables.")

Imagine US cinema solely dealing with the Revolution and how we still--230 or so years later--hate those damn Red Coats. Sure, the US made a boat-load of propaganda films about WWII, but they stopped doing that, realizing the error--except for the Gulf War/ Iraq era films "Pearl Harbor" and "Saving Private Ryan" and a few others.

Anyway, how about something different about Korean history . . . not just the same themes again and again?

The points you make for cinema go doubly for translated Korean literature, which is so tied up in separation literature (pundan munhak) that little else goes through the translation process.

I imagine the percentages are a little less bad in literature in Hangul, but that's a guess.

I'm sure this has its effects on video, as Korea still seems to use literature as the basis for a large percentage of its video/movie production.

I am pretty sure you are Canadian, and I am well aware of relative troop numbers in the Korean War, but do you have to refer to the end of the Korean War as "American liberation" of Korea?

Yes I must... since I (and Myers and Burgeson) were referring to Korea's liberation at the end of WWII. Yes, the USSR was the only country that was involved in physically attacking (and bombing) Korea under Japan, but they were essentially able to waltz in after the US had already cleared many of the Japanese islands in the South Pacific .

Another good interview with Park from KLTI's "LIST" Magazine: