So on last Sunday's Simpsons episode (a pretty good one, actually), Bart fails to do his homework yet again and his parents come for a chat with the principal, who shows them the a stack of homework - an entire month's worth - that Bart has failed to complete. 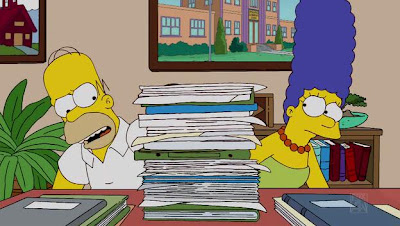 Marge and Homer have different reactions, as the following conversation shows:

Marge: One month? That's a heavy workload for a fourth grader.
Homer: I say this boy needs more homework. (I don't have to do it with him, do I?)
Principal Skinner: No.
Homer: Pile it on! I want him to be Korean by the time he's done.

I wonder how Korean students would react to seeing the stack of homework in the photo above.
I was also curious as to whether this Korea reference was influenced by President Obama's comments about the Korean education system. I could remember a few other references, however, and this guide gives us a list of all the previous references to Korea in the Simpsons (I remembered the references to Korean gangsters and to the broken-legged gymnast, along with another shown below).

Of course, another reason for the Simpsons to refer to Korea would be because the show is animated in Korea, as this interview with Nelson Shin (신능균) shows. Be sure to watch it - not only is there a behind the scenes look at the studio, and animation in progress, but we learn a little about Shin's past (While I was aware he had animated the Transformers cartoons in the 1980s, I had no idea he'd animated the Pink Panther or created the rotoscoping for the lightsabers in the first Star Wars film - very cool).

At the end of the clip, the interviewer mentions a scene I remembered well from a 1992 episode which featured Kent Brockman reporting from a studio in Korea showing how animation for American shows was done (click to enlarge the panorama): 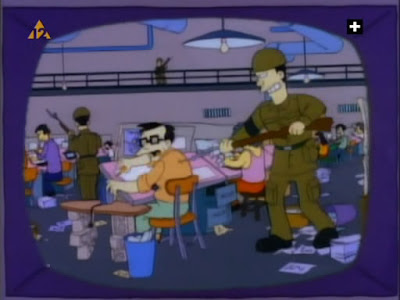 I suppose that was during Roh Tae-woo's presidency, and Chun Doo-hwan had been voted out only five years earlier, but, as the interviewer mentions, Shin must not have been very impressed animating the scene (though he responds diplomatically, talking about cultural difference).

I've made brief references to the Simpsons before here and here (and more here that I forgot about), though not quite as often as you would expect from someone who did an undergrad thesis on the Simpsons, and who once had a student draw a 'map' of my brain with 'Simpsons' at the center.
Posted by matt at 9:15 AM

“I suppose that was during Roh Tae-woo's presidency, and Chun Doo-hwan had been voted out only five years earlier, but, as the interviewer mentions, Shin must not have been very impressed animating the scene (though he responds diplomatically, talking about cultural difference).”

It could also be that without the precursor word, South, most Americans associate the word Korea with the evil little dud to the North, and, at that time of that Korean workplace episode, his evil dark lard father. Most of what gets airtime in the American media aren’t wholesome, good-deed oriented stories from the South; it’s the “if it bleeds, it leads” stuff that is continually coming out from North of the 38th parallel. Then when the South does make the front pages of the papers in the U.S., it’s usually for something that we see as quite strange like those millions marching in those fraudulent Mad Cow/anti-U.S. protests.

On the flip side, much of our cheap household technology and cars are made by the likes of L.G., Samsung, and Daewoo, but when one sees made in China on the products, it’s pretty hard to associate these South Korean companies with…well… “South Korea,” especially as the powers that be like to refer to the Southern half of the peninsula as Korea while failing to remember that there is also an elephant in the room looming directly above them.

By the way, this week's episode of "Southland" ("U-boat") on TNT featured a Korean storyline on mental illness in children and how most Korean parents refuse to deal with it while their kids suffer (many end up taking their own lives as they don't have anywhere to turn). The American writers even poured a little salt on the wound by having Nokia be the savior in the story.

I had attributed the Korea jokes in the last few years of Simpsons to the presence of Korean-American writer Daniel Chun, but I could be wrong.

The latest “The Simpsons” episode (last Sunday’s) is probably in direct reference to the President saying that U.S. students should buckle down and study a bit more like those here in South Korea (funny that he failed to mention anything about the high number of school-age suicides because of it though or the lack of counselors to help this nation's youth deal with their problems).

But the one episode featuring the gulag-like work scene with the Korean artists in the 1992 episode, ""Itchy & Scratchy: The Movie," is a direct shot at the lack of Americans' knowledge, and other things worldly, about the two separate Koreas. Like I said, we really only hear about one (North) on the nightly news, and it is never anything good. If you asked the average American where U.S. forces are stationed around the globe, South Korea would hardly be mentioned by anyone outside the military.

I don’t know what South Korean kids are taught in school about the North, but most of them don’t seem to realize that it exists, or it they do, they have no “real” knowledge of the history behind the evil little madman who can destroy Seoul anytime he wants. Then, those who might want to learn a thing or two are denied access to information by the powers that be in the South with glaring National Police Agency warnings.

It isn't fair to those in the South that they were forced to live with this burden, but neither was it fair to those in the two Germanys. To this day, when I think of Germany, I still think in terms of East and West because that happened to be the situation while I was receiving most of my schooling. However, always referring to the South as strictly Korea just exacerbates the problem as there are two very different one and one of them is highly unstable at this moment.

Joshing Gnome:
I didn't know that. Strong in the Simpsons you are.

John:
I don't think Lee Myung-bak's government is that unstable. Just kidding. I'd assumed they knew it was South Korea they were talking about and were making a reference to the dictatorships, but you may be right that it was a North Korean reference. Thanks for pointing out that 'Southland' episode. It's easily downloadable, so I'll give it a watch.

Amazing to think that way back when the Simpsons started, Korea has just hosted the Olympics, just gotten its first McDonalds (still years away from coffee franchises) and the per capital GNP was just over $5,000.