Here are some stills from the 2004 film Doma An Jung-geun: 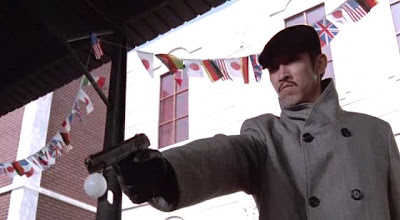 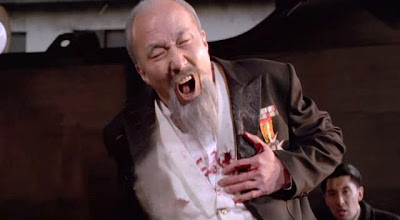 The Korea Herald has an article reminding us that this week is the 100th anniversary of the death of An Jung-geun after "his daring assassination of the peninsula's first Japanese Governor-General Hirobumi Ito." It's titled "Seoul demands Japan's cooperation."

Korea's chief of patriots affairs rebuked Japan on Monday over the lack of help from the former colonial ruler in finding the remains of a renowned Korean independence fighter, saying such an "insincere" attitude hampers efforts to move ties between the two nations forward, according to Yonhap News.[...]

Patriots and Veterans Affair Minister Kim Yang said his agency has found new Japanese records on the imprisonment of An and other independence fighters -- information that Japan has so far denied having despite Seoul's repeated requests. Kim said the new finding means that Japan is deliberately withholding information on An.

That Japan would have such a lackluster response and behave in such an 'insincere' manner when asked to help find the person they called a 'bloodthirsty''fanatic' after he killed Ito, the first Japanese prime minister, doesn't really surprise me. The perceived inability of the Korean side to see this is rather perplexing, if not all that surprising.

" his agency has found new Japanese records on the imprisonment of An and other independence fighters -- information that Japan has so far denied having despite Seoul's repeated requests. Kim said the new finding means that Japan is deliberately withholding information on An"

the korean is crazy
even you can watch such documents
in JACAR
http://www.jacar.go.jp/english/index.html

Going through the papers, with editorials and "news" about Japan and Korean history every day, you'd think Occupation were still on.

I suppose things do come across that way, but when the right-wing powers-that-be have for so long successfully obfuscated a great deal what happened in the half century that ended in 1945, revelations and political posturing does make news.

It's probably smart of the same right-wingers that their offensive views about the US aren't particularly well-known to Americans, despite some people's efforts. Koizumi's and other DLP politicians' visits to Yasukuni Shrine, which insists that the US forced Japan to attack Pearl Harbor.

I wouldn't cooperate with S. Korea
either if I were Japan. It doesn't take a psychic to tell you that S.K. is just going to use An
as another reason to hate Japan and not to let this suff go. It was 100 years ago that this happened.
An wasn't too smart about the whole thing either, because it was because of this assassination that Japan finally had a valid reason to make the annexation final and official.
Also, thanks to hero An, General Terauchi Masatake--hard-line militarist and former Minister of War of Japan--came in and cracked down on Koreans and their civil rights and liberties. We have An to thank in part for the wonderful "Budan Seiji" military rule of this new Gov. General of Chosen, and his diplomatic policies of summary punishment by the sword-carrying gendarmerie
as well the super-duper public floggings for minor infractions. Thanks An Jung Keun, you are a real hero!

Exit86 wrote:
An wasn't too smart about the whole thing either, because it was because of this assassination that Japan finally had a valid reason to make the annexation final and official.

because of this assassination that Japan finally had an engineered excuse to make the annexation final and official.

There. Fixed it for you.

As much as I loathe the hero worship of An, I think the Imperial Japanese expansionists would likely have "found" some other pretext to completely take over the Taehan Empire.

Good points Kushibo. I was thinking "valid" in the minds of the Japanese; but "engineered excuse" would work much better here. You are also correct that Japan would have found another reason to help justify their takeover of "Chosen"; and, as we both know, Japan did continue to find excuses for this annexation,
including the standard colonialist lines of "We are bringing modernity to these poor savages,"
and "We are helping these poor, ignorant, unruly savages who just can't seem to help themselves."
I personally like the one that
stated that the Korean people and the Japanese people share the same ancient origins--brothers and sisters of old--therefore all of Korea's ancient history and pre-history was pointing the way to Japan's eventual takeover of its long-lost state. Though this last "reason" brought about so many discoveries in archaeology on the peninsula, it is interesting how such a "modern" and "scientific" nation
could be so silly in its research.