Global post has an article about an American professor's collection of North Korean comic books:

Heinz Insu Fenkl, a literature professor at the State University of New York (SUNY) at New Paltz, has cracked one secret to understanding the bizarre regime of North Korea: by reading its comic books.

The academic, who refers to himself as an American-Korean, spends hours in his office tucked away in upstate New York, churning out English translations of the rare books (called "gruim-chaek" in North Korea) after he gathers them at shops in China and from colleagues who travel to Pyongyang.

The plots are often wacky, usually pinning blame on loud-mouthed Americans and opportunist Japanese for cursing their promised land with vice. Most books are leaked to China through the border town of Dandong — a hub of smuggling in North Korean goods. Others end up in a single shop in Tokyo that specializes in hermit-state memorabilia. Still, others mysteriously make their way to university libraries in the U.S.

Of the "gruim-chaek" I’ve located, those published this decade tend to be spy thrillers probably aimed at young boys and teenagers. The cartoonists establish the storylines strictly as moralistic good-versus-evil tales. And almost all the books are printed in black-and-white on poor quality paper.

“I've also seen some covers of more recent comics that seem to be re-establishing a mythic narrative by referring back to old folktales,” Fenkl said, adding that he’s planning a single massive web archive for all his North Korean comic books.

I'd be curious to see that archive when it's up and running. And good on him for taking the time to translate those comics - interesting things can happen when you translate comics.

The article provides a few examples of the covers, such as below (which make clear they should be Romanized as 'Gurim Chaek' (or Geurim Chaek). 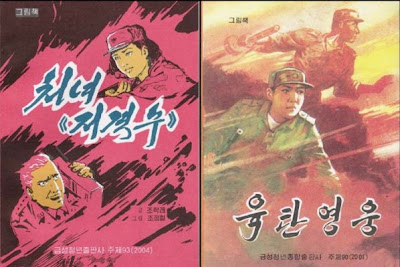 If the soldiers on the cover of the book on the right look more like Japanese soldiers, a reason for this is given by B.R. Myers in his book The Cleanest Race:

[T]he masses are reminded with increasing frequency that because the nation cannot survive without the leader who constitutes both its heart and its head, they must be ready to die to defend him. As if the logic were not in itself reminiscent of fascist Japan, the regime makes increasing use of the very same terms - such as "resolve to die" (kyolsa) and "human bombs" (yukt'an) - that were so common in imperial Japanese and colonial Korean propaganda during the Pacific War.

'Human Bomb' can be seen in the title of the comic on the right above - '육탄영웅.' Good to know children are reading comics like these.

A 1968 Japanese New Wave film titled 'The Human Bullet' also deals with this concept, but in a very satirical and absurd way, telling the story of a man in a barrel strapped to a torpedo, floating in the ocean waiting for the Allies to arrive. Somehow I imagine that's not what these North Korean comics are like...
Posted by matt at 12:02 AM

On a related note, the San Francisco Main Library is having an exhibition on North and South Korean manhwa, which is what I first thought this post was about.

Interesting stuff, this window into the North.