North Korean propaganda to be shown on South Korean screens?

I can't find it now, but at work I saw a banner ad for A Little Pond at the top of Daum and it featured in large red letters "KILL THEM ALL"; I'll see if I can track down some screenshots of it. At any rate, despite the photo mosaic poster being the most popular on news sites, the ad campaign is obviously drawing more upon the spirit of the 'Kill Them All' poster.

"You bastards get out! Who gave you the right to come to another country and kill innocent people? This is our Korean land, Korean land... do you think all Koreans have died?"

At The Marmot's Hole, it was announced that A Little Pond, the movie about No Gun Ri, will be released in April (three or four years after its completion). Do go and read G.I. Korea's post about this, as he has links in it to his deconstruction of the original AP article from 1999, which tell a slightly different story - that refugees were killed by American troops (but not 400, a number based on a contemporary North Korean newspaper account) after communist soldiers disguised as refugees fired on the US troops from within the group of refugees. One doubts that the film covers this, based on this new, updated version of the original poster for the film - which I've mentioned here and here: 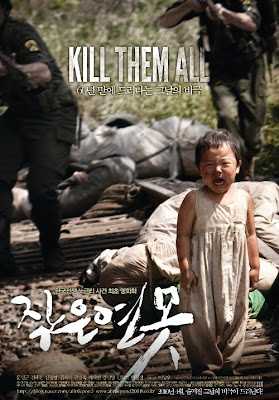 "Kill them all" is a lovely addition. As I noted before, it reminded me a little of this... 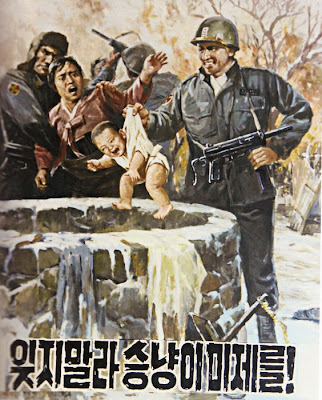 Do not forget the US imperialist wolves!**
...or perhaps of this: 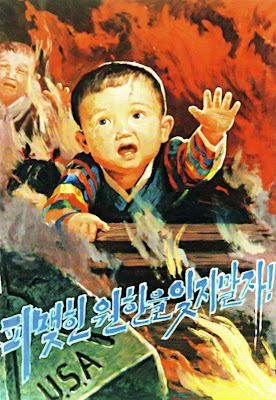 Let's not forget the blood-drenched hatred!
Or perhaps this (as noted here, from this collection of DPRK Anti-US posters linked to here).

There's also another new poster for the film: 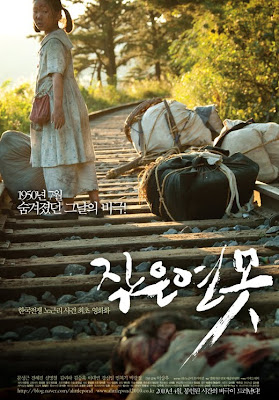 All these poor children! It reminds me a little of this... 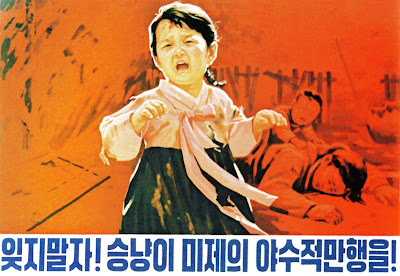 Let's not forget, the savage cruelty of the U.S. imperialist wolves!
...or this: 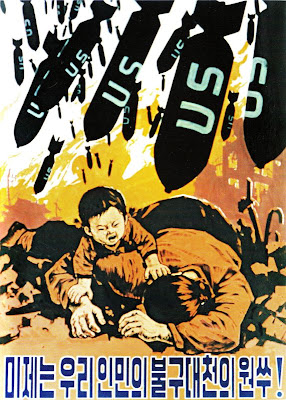 American imperialists are the enemies of our people!
In The Cleanest Race, B.R. Myers describes how the North Koreans modified Japanese propaganda to fit their needs:

Where the colonial power had touted Japanese virtue as a protective talisman, the Koreans now believed that their virtue had made them as vulnerable as children to an evil world. What by international standards had been an enviably placid history was now remembered as a long litany of suffering and humiliation at foreign hands. In depictions of the colonial era, novelists and painters focused on the forced labor of little girls and boys, thus reinforcing the impression of a child race abused by an adult one. [...] Koreans had done nothing under the Japanese but suffer.

Of course, he's talking only about North Korea there, right?

Here's the trailer, via the Marmot's Hole

Having watched that, I suppose you could add a few more familiar images: 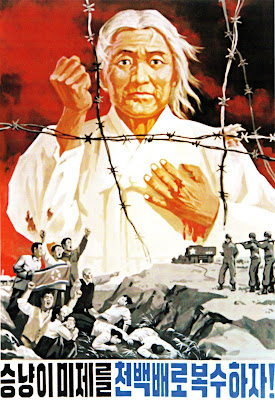 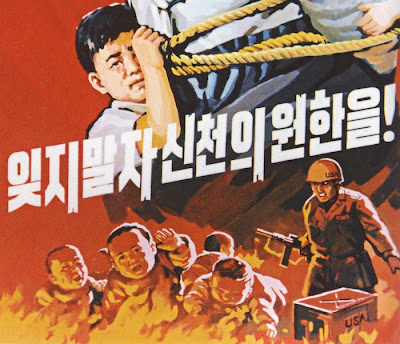 Let's not forget the grudge over Sincheon!
To be fair, most news outlets are not promoting the two posters for the film seen above. Only a few, such as TV Today and (surprise!) the Hankyoreh have posted the Kill Them All poster, while the new poster with the (presumably) orphaned girl appears in such places as here and here. Most news sites have posted this one, which first appeared at the Pusan International Film Festival back in October: 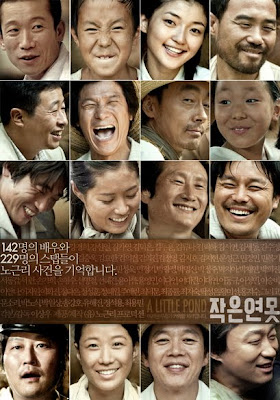 It appeared in the background of this press conference on March 18: 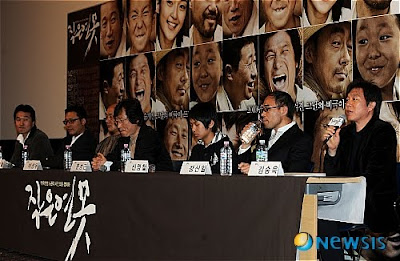 Still, it seems, at least from the trailer, that the other posters convey the (apparent) message of the movie much better than the one seen above. It will certainly be interesting to see the reaction to this film, though apparently, as Extra! Korea notes, the critics aren't impressed. As the Korea Herald quotes the producer,

"Director Lee Sang-woo wrote the script that went in a direction that made investors shy away from committing to the project," he said. [...] It also didn't help that the subject matter was viewed by investors as "unsellable" and "too controversial" for it to have any chance at box office success.

Good. One wonders what 'direction' the script went in that gave investors cold feet? I also enjoyed this quote: 'On the film's title, Lee says it holds "no particular meaning."' Wow, really? I've complained about the metaphor in the song the title is based on being completely unrelated to the movie before. Still, perhaps some people are interested in it. It's being described by some as 'a movie containing the uncomfortable truth.' It contains an uncomfortable truth, all right, but not the one that writer is thinking of.

As with most historical films about the 20th century made in the last ten years, it will likely begin with an idealized past of happy people who are suddenly swept away by the tide of history and delivered to a horrible fate by outside forces behind their control. Another film that recently came out illustrates this style quite well, even though it has nothing to do with history at all. I'll save that for my next post.

* From Han Sorya and North Korean Literature: The Failure of Socialist Realism in the DPRK by B.R. Myers.
** The posters are from North Korean Posters: The David Heather Collection.
Posted by matt at 8:44 AM

It's very simple: the chinboista fifth columnists and their brainwashed minions will like it, feeling it resonates with them and speaks truth to power, while the more thoughtful will be uncomfortable with the message and see it for the not-so-subtle lie that it is: Like a Bruce Cumings "history," it will pore over and shine a harsh light on South Korean or American atrocities that should never have happened but which can come out in a free society, while glossing over or outright ignoring far, far, far worse and more numerous atrocities by the North, which started the whole freakin' war in the first place.

I just couldn't believe all of the puppy dog/ naive/ innocent looks the actors were giving the camera.

It's not the first time a Korean movie/book/album has blatantly stolen cover art. I wouldn't be surprised if it was done without the least bit of thought.

I'm not sure what I find more disturbing: the idea that the filmmakers/PR people used DPRK propaganda as inspiration, or the idea that they didn't, and yet came up with such similar images of Americans killing children.

Hi Matt: Like the post (as always). But shouldn't you be looking at South Korean propaganda, too, to get a better sense of how the promotions for LITTLE POND fit into the big picture? I think (but am not sure) that you will find a lot of the same elements in the South's propaganda, too. Which would help explain why you are seeing the same elements.

Then again, how much of South Korean propaganda comes from the same sources as NK propaganda?

Good point. Are you thinking of older South Korean propaganda demonizing North Korea? It's crossed my mind to look for it before (and I've heard of the posters that used to be in barber shops, that students were told North Koreans had horns and tails, etc), but I haven't seen much (other than some anti-Chinese Korean War-era stuff). One thing that pops to mind is the scene in 'The Marines Who Never Returned' where a soldier finds massacred southern villagers (including his sister), a scene which was very graphic for the early 60s (at least compared to American films), but explainable considering that the ROK government wanted to inculcate hatred towards the North.

I was curious about the documentary KILL THEM ALL before.
Nice to see more research on this.
Nice researcher!

The page I linked to - ROK drop - has done an amazing amount of research - we're lucky to have him.