The Korea Times has an article about the Korean government giving recognition to the protest against SyngmanRhee's electoral corruption in Masan 50 years ago today which set off the a chain of events leading to Rhee's ouster after the April 19, 1960 Student Revolution.

It took half a century for Masan to get the level of respect from the government it has sought for the legacy of the movement as well as for remembering the victims. The government Friday designated the date of the uprising as a "national day of commemoration." This means that the Ministry of Patriots and Veterans Affairs will be in charge of organizing the commemoration, rather than the local authorities as has been the practice for the last 50 years.

More importantly, it means that for the first time, the state has officially recognized the incident as a part of the nation's democratization movement and institutionalized a state ceremony to remember its spirit. [...]

A local commemorative association has organized a reenactment of the bloody pro-democracy crusade to mark its 50th anniversary this year. 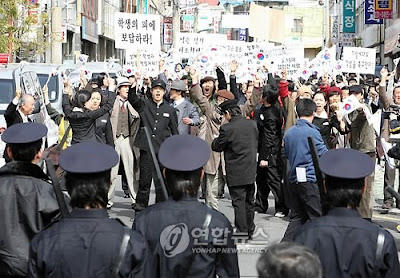 Today's re-enactment of the 1960 protest.

When President Lee visited the city as a presidential candidate in 2007, he pledged that he would seek a national commemoration of the movement. "The movement is the impetus for the April 19 Movement and the pioneering event in our democratization," Lee stressed.[...]

Ah, election promises. Nice to see he could deliver on one.

The events were touched off by the discovery of the body of Kim Ju-yul, a Masan-based student killed by a tear-gas shell in demonstrations against the election rigging of March, in Masan Harbor. Kim's skull had been split by a tear gas grenade. He has since become a symbol of the March 15 uprising. 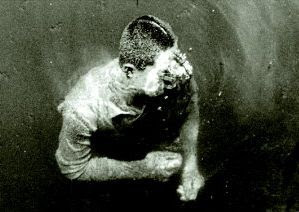 This photo was on the Korea Times site in the article last night but has since been taken down and replaced with Kim's student photo. Video of today's ceremony can be seen here (via Yonhap).

I looked at this incident before in the larger context of the April 19 uprising - this year will be its 50th anniversary. As Time Magazine described it, the March 15, 1960 election was rigged using ballot stuffing, intimidation by pro-Rhee youth groups and police, and forcing mayors and police chiefs to tender their resignations before the election, with the promise that the resignations would be accepted if Rhee's candidate for vice-president didn't win.

Tension ran high in many areas, and in the normally peaceful town of Masan voting was still in progress when a disgruntled crowd raised the cry, "Dirty polls!" It was like a spark in dry straw. Suddenly, 200 angry citizens raced to a police station, set it afire, fled with captured weapons. Another mob, 2,500 strong, gathered before the town hall, stoned firemen, who vainly attempted to hook up their hoses to fight back. After tear gas failed, scores of police arrived from nearby Pusan. One lowered his carbine and fired into the screaming crowd, a signal that led other cops to do the same. When it was all over, at least ten were dead, some of them schoolchildren, scores were wounded and hundreds were pushed into police vans and hauled off to jail.

An April 25 article tells us that

Five weeks ago, in the midst of the rioting that gripped the quiet city of Masan during Korea's presidential elections, a 16-year-old student named Kim Chu Yul sortied out into Masan's streets and never returned. The police claimed they knew nothing about him. But last week [on April 11] a Masan angler, fishing in the city's harbor, brought up Kim Chu Yul's bloated body. Still protruding from the corpse's head was a fragment of one of the tear gas shells that Masan police had used in quelling the election-day riot.

As the news spread through Masan, 10,000 infuriated citizens, many of them high school students, flocked to the building where Kim's corpse lay and demanded the body "so we can take it to Seoul and show it to the National Assembly." When the authorities refused, the crowd ran amuck. Raging through the streets, shouting demands for the resignation of President Syngman Rhee, the rioters sacked Masan's city hall, the local offices of Rhee's Liberal Party, the home of Masan's mayor and a brewery that a local pol allegedly received as a bribe for switching his support to Rhee in the elections.

From the brewery—where they found stacks of leftover ballots marked for Rhee's running mate, 63-year-old Vice President-elect Lee Ki Poong—the rioters moved on to Masan's police headquarters, smashed through a police cordon and wrecked the station. When Masan's police chief came driving up, infuriated women set fire to his Jeep and beat him so badly that at week's end he was still in a coma. For the next two days, the students of Masan paraded ceaselessly through town bearing placards that read "Down with Fraudulent Elections" and "Can Freedom Gained Through Blood Be Taken Away by Bayonets?"

Masan has long been a stronghold of opposition to Rhee's Liberals. In 1956 the people of Masan gave Rhee only half as many votes as Progressive Party Candidate Cho Bong Am (later hanged by Rhee's police for treason). Masan's voters flatly refused to believe that this time they had voted Liberal by nearly 3 to 1.[...]

Rhee himself came up with the predictable conclusion that the Masan riots were the work of Communist agents. The Masan police arrested so many violators that the city jail overflowed and some prisoners had to be held in railroad freight cars.

Things turned out all right in the end, considering that Rhee would be overthrown by the will of the people (and the military's decision to back the people, as well as US pressure for him to step down). Of course, a year later, Park Chung-hee would overthrow the government and rule for 18 years until a debate over how to deal with anti-government protests in Korea's southeast in 1979 lead KCIA head Kim Jae-gyu to kill Park. The location of those anti-government protests? Busan and Masan - which leads me to wonder if the 부마항쟁 (Bu-Ma uprising) is also commemorated by the government.
Posted by matt at 2:37 PM