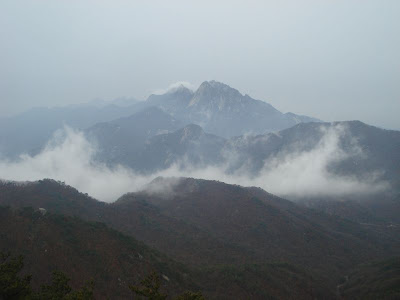 A couple weeks ago I hiked Dobongsan with a friend. The last (and first) time I'd gone was in 2001. On the way up there were a lot of birds. Crows, magpies, and quite a few of these (I'm not sure what it is, though I am quite certain it was not a pigeon!): 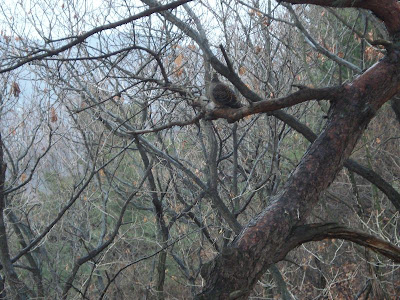 There were chickadees (I saw some, and heard their call) as well as these little guys (not a great photo): 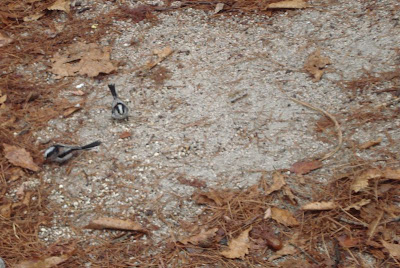 As we went along the ridge, we reached a spot with this view (a close up is at the top of this post), which made the hike well worth it.

Worth it even though it soon turned very difficult. It had been raining throughout the day, and suddenly the temperature dropped, it began to snow, and the muddy trails began to freeze and become slippery - just like the rock slopes next to 30 meter drops. 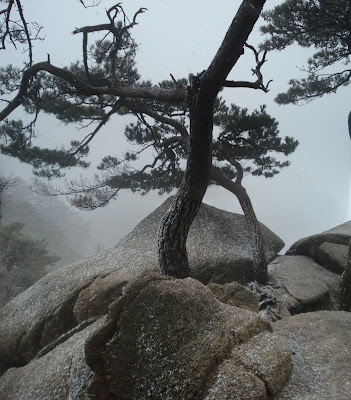 What should have been a three hour or so hike turned out quite a bit longer, and it took a few days to recover. Never made it to the top of the highest peak like I did last time I went, but did get a nice photo of it, at least...

The pidgeon-esque bird was an Oriental Turtle-dove ~ pidgeons and doves are actually from the same family (Columbidae). The nasty one we associate with the cities are feral Rock Pidgeons.

I love Dobongsan. My mother is a big hiker, and we would go to one of Dobongsan, Cheonggyesan or Bukhansan almost every weekend. Thanks for evoking the memories.

* Atlantic cod, primarily predators, have been found with such things in their stomachs as garbage, turnips and even a partridge

* The female spotted sandpiper is a modern, forward-thinking bird; she competes for a mate then leaves the egg incubation and young-rearing to the male

* Black bears in several BC communities have been known to break into people's homes and help themselves to the contents of fridges and cupboards.

There is no place like Canada in the world!

That is fascinating, astonishing and bizarre! Thank you!

Green Party of Canada: "The Green Party of Canada (French: Parti vert du Canada) is a Canadian federal political party founded in 1983 with 10,000–12,000 registered members as of October 2008. The Greens advance a broad multi-issue political platform that reflect its core values of ecological wisdom, social justice, grassroots democracy and non-violence. It has been led by Elizabeth May since August 26, 2006."

Is The Green Party Anti-Semitic, Pro-Islamo-Supremacism?: "OTTAWA — Green Party Leader Elizabeth May is affirming her support for an Ottawa-area Green Party candidate accused of “Israel bashing,” just one day after citing anti-Semitism as grounds for rejecting one of her B.C. candidates.Qais Ghanem, a Yemeni-born physician with a strong interest in the Middle East, has stirred debate among his fellow Greens on the party's online discussion forum. The Greens' Ottawa-South candidate has aligned himself with three other Green candidates to form what they call the “Ottawa Group of Four.” They are pushing the party to approve a resolution called “Palestine” that “calls upon Israel to end its forty-year occupation of all Arab lands without preconditions.”