Down by the Han River park near Banghwa

I had a pleasant surprise the other day when I rode my bike down to the Han River park in Banghwa-dong: 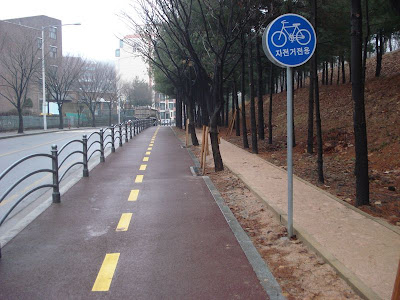 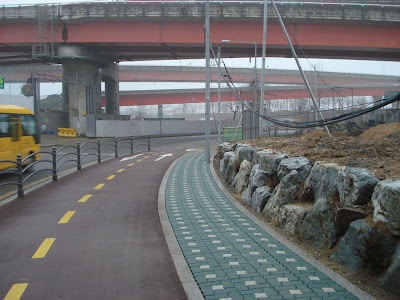 What you see above is what used to be a single lane bike path which people walked on and which was often borderline dangerous, as there were blind curves where you could have close calls with oncoming bikes or pedestrians. No longer, and it makes for a much more pleasant ride. Down near the Banghwa Bridge is the Gangseo Ecological Wetland Park, which seems to have recovered somewhat from the 2006 flood which scoured much of the vegetation away.

They've added a wall to the railing at right, which I imagine was to keep people from being seen by the birds in the area. On the left above was a bird similar to a crane or a heron, but it was too far to get a good photo. In another spot, visitors can remain hidden and look out onto the Han River, where this view awaited me: 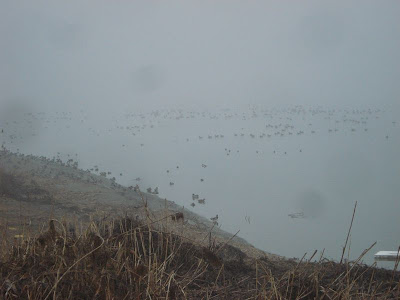 It's hard to see, but there were some 200-300 ducks off in the distance, as well as along the shore just in front of the viewing enclosure. Off to the right is the Banghwa Bridge: 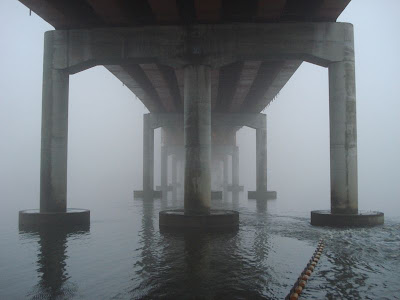 On the right a current can be seen jetting out between the piers. Seen in the photo below (the blue area is the ecological park; the yellow dots at bottom center are where the photos of the bike path were taken), that water used to come from a cove to the right of the bridge: 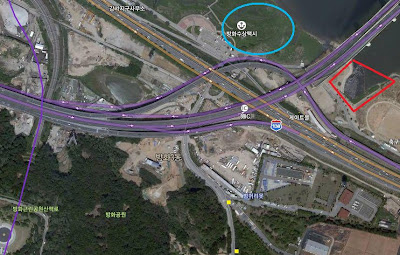 Back in June construction started there, though I wasn't sure what its aim was. I can't be sure, but I imagine the water is the outflow from the nearby sewage treatment plant (which I should mention doesn't smell, actually).

Now I know. The entire cove was covered over with a sports playground (seen at right in the distance below). The exercise machines were also added.

A water taxi post was also added, but didn't seem very popular that day. I wonder if it's ever used.

These improvements are welcome, but it's too bad they've made some of the areas seen here harder to get at. This seems to be part of the Han River Renaissance Plan, which is good in that some areas are made more accessible, but seem to enjoy 'improving' real nature in order to turn it into a visitor-friendly park. At the moment, however, the balance struck in the Banghwa section of the Han River Park still seems favorable to nature.

This is just one of the several park improvements made in the area, but I'll save those for another time.

Thanks for highlighting this spot in Banghwa. I cycle here from Sadang pretty often and it's a nice little spot to hang out...I usually rest and stretch out in the track/exercise area next to the one directly underneath the bridge (the one you took a photo of).

It is a little bit isolated; even several of my Korean friends (other than those that I cycle with regularly) don't seem to know about it. But that may actually be a good thing. :)