A swarm of bees

Some excitement outside work yesterday - a swarm of bees suddenly gathered around the roof of a house across the street: 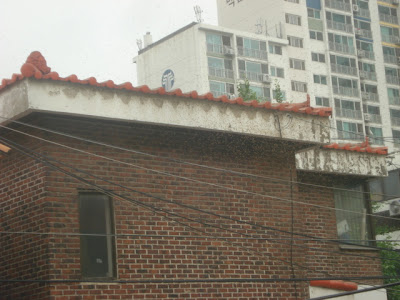 Not the easiest thing to catch on camera from a distance. Before long a 119 emergency vehicle showed up, which was followed by a fire truck. 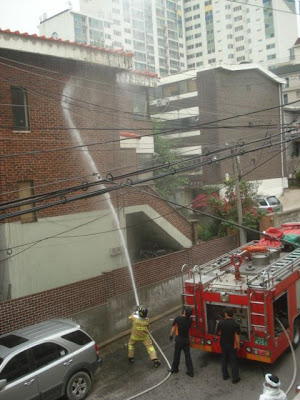 Hosing down the roof (they seemed to gathered around the underside of the roof, but never had a chance to land en masse) dispersed most of the bees (who knows where they went after that). 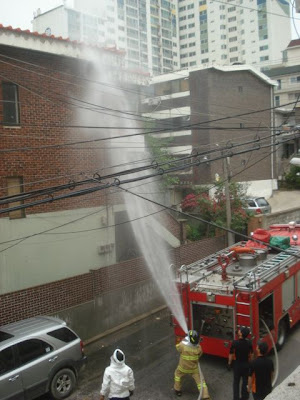 According to this, bees usually swarm near their original nest. I was up on Gaehwasan, behind where I live, a few weeks ago and noticed someone selling honey - with several (man made) hives clustered nearby - perhaps there are some being raised nearby where I work as well.

Oddly enough, I've blogged about bees before (real bees, not films). And as long as I'm on the topic, why not link to my favourite song from the Soft Boys' Can of Bees?

what's wrong with bees?
They're pretty much harmless.

Hey Matt, I went through your blog and read a few posts. This is a cool place. :)
I figured out later that I don't have your number or anything. :(
It was really cool meeting you.
In my country, we don't treat bees like this. ;)

I find this post quite refreshing and comical in a way compared to your regular posts. Love the music : )

Empty:
"Ow! They're defending themselves somehow!"

wetcasements:
I'd never even heard of that animal - very cool.

Mina:
Glad to know it's not too boring - you can reach me at mattvanv at yahoo dot com

noe:
One of the benefits of doing a radio show in university was digging through the station's library - that's where I discovered the Soft Boys, among many others.