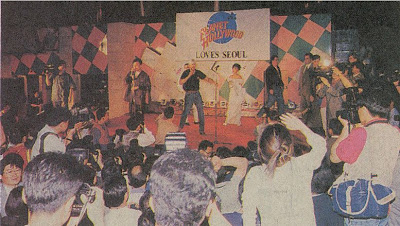 Superstar Bruce Willis and his band "The Accelerators" will perform at the U.S. Army Base in Seoul, Korea for 3,000 American troops on Thursday, May 26. The performance, a special request from the U.S.O., will be part of an effort to boost moral for the troops in Korea. Willis will make a private visit to American and South Korean soldiers in Korea's demilitarized zone.

A photo of Willis hanging out with Park Jung-hun during this visit is here. I'm not sure when the restaurant opened, exactly, but almost exactly a year later Willis returned with Jean-Claude Van Damme, Don Johnson and Cindy Crawford. 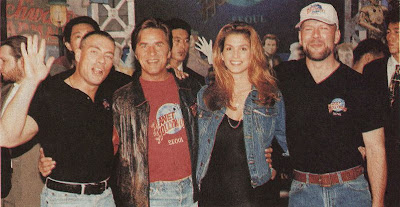 (From here)
It opened during a time of growing affluence, as this article notes, but apparently "closed within months." As this post describing a September 1995 visit to Seoul put it,

I wasn't surprised to hear that it later went out of business. It was so far from anything, that you couldn't even say it was close to nothing.

I'm not really sure where it was, but you can apparently buy paraphernalia from it like shot glasses online. Obviously, there is a reason for a post about Hollywood stars (something I care little about) visiting Seoul, namely this May 26, 1995 Stars and Stripes piece about Willis and Johnson's visit:

U.S. Army helicopters brought the two stars and an entourage of about 40 people to camp. They were taken on a tour of nearby Panmunjom which straddles the Korean War ceasefire line just north of Bonifas.

"It gives me an odd feeling standing here," Johnson said, "because I really like freedom."

As a solemn-faced North Korean guard outside leaned close to a window to peer at the crowd inside the building, Willis struck a tough-guy pose, balled fists at his sides, and quipped, "Gimme a reason. Just gimme a reason."

Back at Bonifas, they posed for scores of photos with the troops. Then, as a crowd of about 200 security force soldiers enjoyed music of Willis' rock'n'roll band, Johnson, in an interview, called the DMZ visit "one of the most extraordinary experiences of my life."

"I really like freedom." "Just gimme a reason." What would we do without celebrities to guide us with their wise words? And why didn't Willis follow up on this with a movie in which he single-handedly reunifies Korea?
Posted by matt at 11:57 AM

I think it was located on Nonhyŏn-no Street, on the eastern side of the road, just south of Tosandaero, almost midway between Apkujŏng Station and what today would be Haktong Station. (I'm basing that from Google Earth, based on memory; if I'm wrong about the location, then it's one major street over one way or the other, I think.)

I was kinda happy to see them fold because it really was an arrogant business model: charge ridiculous prices for mediocre food and expect star power to draw them in. Had it succeeded, it would have set an expensive precedent for future foreign restaurant chains.

IIRC, Planet Hollywood has a connection to the infamous Subway Incident, since the USFK personnel involved in that, I believe, were coming home from that restaurant when everything went down.

Wow, what a horrible idea.

I'm guessing nose candy was involved in the decision to open up something that was doomed to fail.

Kushibo:
Thanks - I had no idea where it was. I was going to mention that I wondered if the anti-US feeling after the subway incident (which took place days before the stars visited in 1995) had some influence on its failure. I can't find anything about the soldiers having been at Planet Hollywood in Stars and Stripes from that time (there is a mention of them being at a 'pub' and being given a set of mugs and a pitcher to take home); perhaps a closer look at the KT will turn up a confirmation (there were tons of articles, especially in the letters page, at that time).

matt, I don't think anti-US feeling played much of a role, if any. Bennigan's opened later in 1995 and it took off, while TGI Friday's had opened two years earlier and was also expanding by leaps and bounds.

Any anti-American sentiment from the incident would have been very minimal, as the location of where they'd been was not publicized much. I think I read about it in the Pacific Stars & Stripes.

I am recalling the PH connection with the subway incident from memory (not the "IIRC" in my first comment), but there is always a possibility I'm misremembering; this isn't one of those things where I'm 100.0% certain my recall is absolutely correct. It is also possible that they went to the restaurant and to a pub in the area.

Anyway, Planet Hollywood simply was not the right fit for Korea at the time. Anti-American sentiment does not explain every bad thing that goes on. :)

I thought it was on Gangnamdero
near the old Tower Records close to Gangnam Station. Could be wrong, it was a long time ago.

TGI Friday's first (?) location was a huge success because they were right near Yangjae Station. They'd still be there today but, reportedly, the owner of the property got greedy and thought that TGIF should pay a jacked up rent because they were so successful. TGIF said, hold on, we're successful not because of this particular spot but because we're TGI Friday's, and they closed down and opened up one close to Kangnam Station and then another just up from the old Yangjae one (I think).

Anyway, the address is in Nonhyŏn-dong (reference here and here), but I don't know if that extends all the way to Kangnam-daero. I think it does. Still, I'm pretty sure it's Nonhyŏnno or Ŏnjuro streets.

While looking for the address, I keep running into old Naver articles describing places I'd long forgotten about. Coco's used to be the shit (good meaning), and that spawned Skylark. Tony Roma's was big for a while, but I think they've mostly closed down.

L.A. Palms, near Coex but before Coex, was decent. Pietro's, a Japanese version of Italian food, was (I think) on the road from Kangnam to Coex and wasn't bad. There was (is?) one in Kangnam Express Terminal's Central City, I think, near the big bookstore. There's one here in Honolulu and if I see one when I'm in Japan, I go in.

Winchell's is all gone. Denny's was in a few places (Myŏngdong and Itaewon) but has disappeared.

I remember the first incarnation of off-post Taco Bell, at Ewha Station. Even Carl's Jr briefly made an appearance, close to Kangnam Station, and it tasted like it should. Hardee's, before they were bought out by Carl's Jr and their sandwich menu obliterated in favor of burgers, used to be in a lot of different places and was pretty popular.

It's nice to see homegrown chains, from Twosome Place to Nolbu, etc.

i was a driver at JSA then...drove for Don Johnson and Bruce Willis when they visited the JSA...The band was awesome. we set up a stage in the motorpool....the troops will never forget.