I was waiting at Gayang Station on Line 9 last week when a train inched into the station. Its speed and the fact that the announcement board said not to board the train made me curious, and this is what it looked like inside: 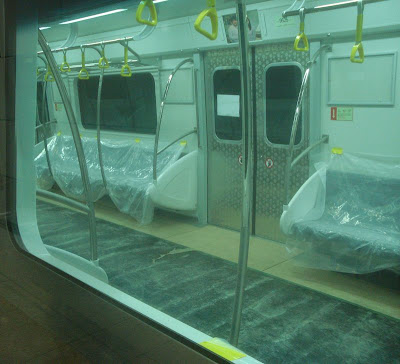 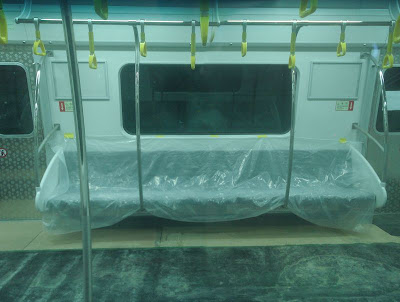 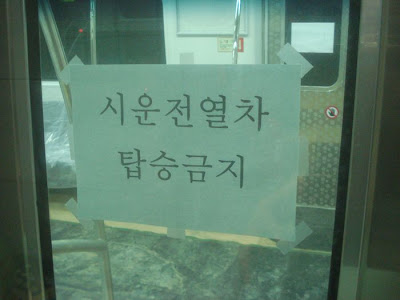 The sign reads "Train on trial run - do not board." A look at the Wikipedia entry for Line 9 revealed this welcome bit of information:

This Munhwa Ilbo article is listed as a source, which makes clear that, when the 12 new trains are put into service in October, there will be 36 trains in total, meaning there must be 24 trains at the moment (most likely 8 express and 16 all-stop trains). It also notes that the new trains would arrive in July 2011, 16 months after the order was placed for them (ie March 2010). I imagine they've arrived early, and that the train above is one of them.

The increase in the number of trains is welcome news. The express trains are jam-packed to the point they can no longer take on passengers (after two stops!) in the mornings, and are little better in the evenings. One reason for this is that the trains are only four cars long, but the stations have room for trains with eight cars. I'd wondered if this was a bid by the company to save money, seeing as it initially planned, if I remember correctly, to charge a fare of 1,300 won, but was forced by the city to charge 900 won (it's vaguely mentioned here). Perhaps this isn't the case, however. I think increasing the number of trains, rather than the number of cars, is the best way to go. The trains come infrequently compared to other subway lines (all-stop trains leave Gimpo Airport Station every 10 minutes, with express trains leaving every 20 minutes). Needless to say, I'm looking forward to the change, though as far as going downtown is concerned, the AREX line will always be faster, especially when the transfer at Gongdeok station opens at the end of this year. The two lines together have made the Gangseo-gu area feel much closer to downtown, and have affected housing prices as well.

One nice thing about the Line 9 trains is being able to look out the front window... 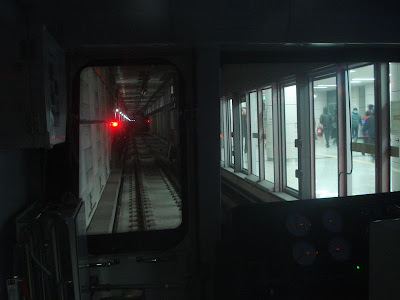 (Note much space is available for more cars.) 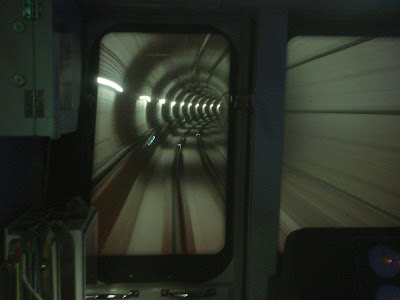 I sympathize. I hate line 9 because of the crowding.

I wonder if something like induced demand, an engineering problem with automobile traffic occurring when increasing the number of lanes on a highway, occurs with subway traffic? Providing more of a thing encourages more use of it. Building a traffic lane on a busy highway usually results in more congestion rather than less. You want to reduce congestion, charge money to drive on the highway. Or, with line 9, charge more to ride the train.

I think 9 gets so many passengers because of the location and direction of the line. There's no convenient one-bus solution to get where this train gets you in such a short period of time. And we all know how impatient people are in Seoul. Noryangjin to Gangnam is always going to be insanely busy. Always.

I think the more cars will initially result in reduced congestion, but I do believe use will increase not spread out. No matter what they do, there's only one way to reduce demand, in my opinion: raise prices.

It's easy to avoid using the 9. It doesn't go anywhere public transport didn't before it opened. In my mind, the more people use it, the less busy the other means of transport will be. And that's a good thing.

Good points about induced demand; I imagine, in the short term at least, it should solve some of the crowding problems. But because of the need to route all-stop trains onto bypass tracks (that are only at some stations) when an express approaches, I doubt they can fit that many more trains in during rush hours as the other lines do. I imagine they will be more spread out during the day, which isn't such a help in terms of alleviating rush hour crowding.

"It's easy to avoid using the 9. It doesn't go anywhere public transport didn't before it opened."

Perhaps, but Gangseo-gu had a large 'subway black hole' which Line 9 solved, and some of the existing bus routes (about half as fast as the subway) were removed after Line 9 opened. While I use it for work, I find AREX to be more useful to go downtown, and it will be especially so when the transfer to Gongdeok opens.

They will also be able, if they want, to couple two units together to make an eight car train for rush hour services. This is absolutely standard on suburban lines in London, where we don't have trains built as single eight car units.

I would guess that July is when the delivery of new trains was expected to begin and it will take several months for all twelve sets to be built and delivered.